ArtNow showcases the range of innovative styles and techniques many Oklahoma artists are using, from Tulsa painter Jim Polan experimenting with Skittles to generate enigmatic circles on his abstract canvases to Norman ceramic artist Stuart Asprey creating a porcelain version of brass knuckles, “which would be useful in a fight, but you just get one punch in,” Scanlan joked.

Cathleen Faubert, an assistant professor at the University of Oklahoma’s School of Visual Arts, concocted an evocative bottle of “olfactory art” to enhance her seascape photo taken off the coast of Nova Scotia. University of Central Oklahoma adjunct professor Lopeeta Tawde was inspired by bioluminescent marine life to create sinuous, sculptural jewelry that glows under black light.

Fashion artist Sarah Nsikak talks about her work during a curators' tour of the ArtNow exhibit at the Oklahoma Contemporary Arts Center in Oklahoma City on Monday. Photo by Chris Landsberger, The Oklahoman 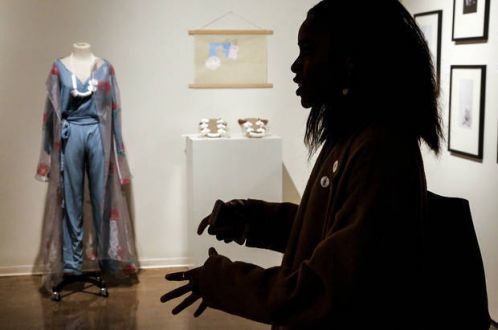 Around Town: Honored by Paseo
The Journal Record