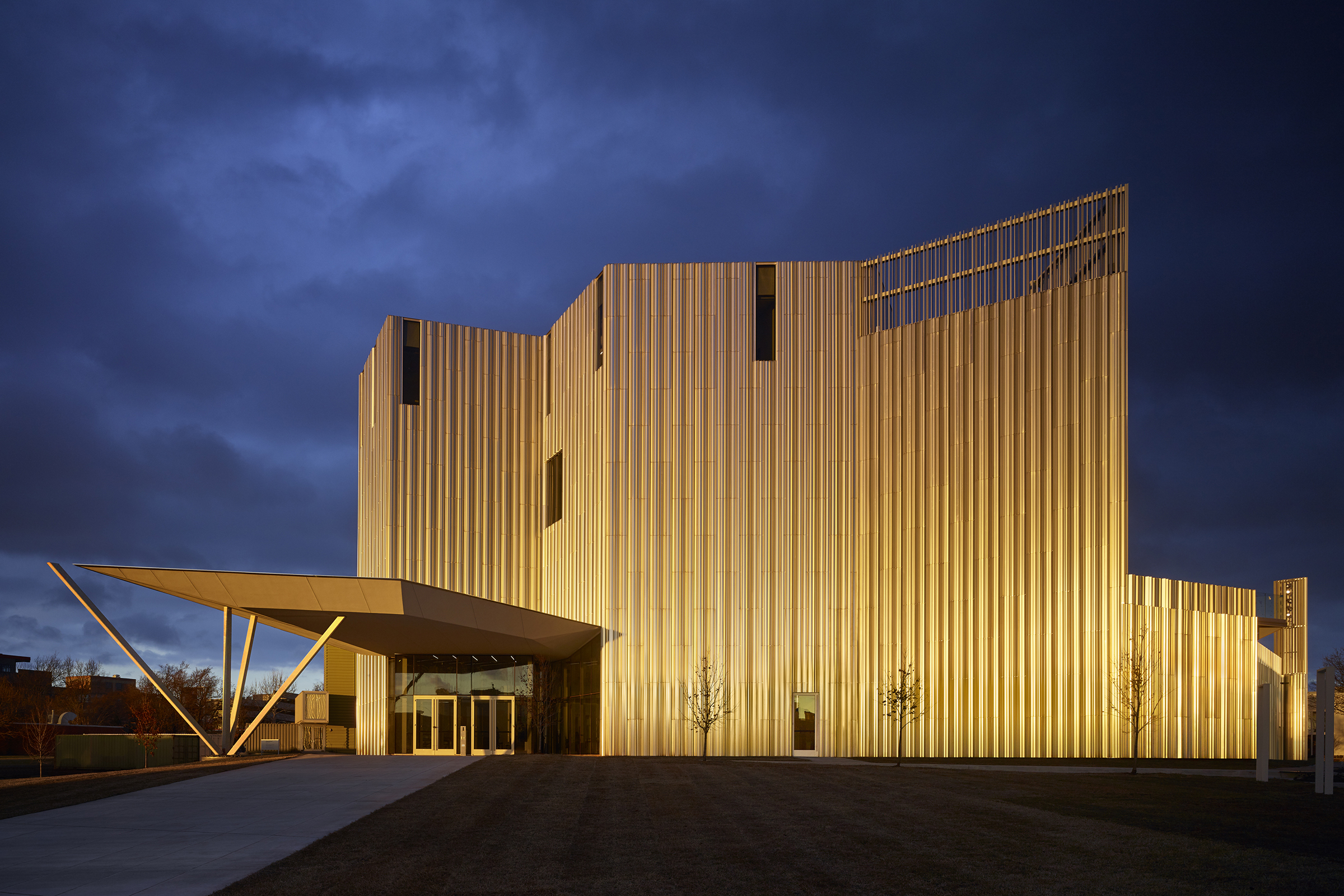 There is no law in nature that says that the external skin of a thing must express its internal structure. After all, as the English writer and polymath John Ruskin liked to say, the stripes of a zebra do not describe its underlying bones or muscles. As in nature, so in architecture, where one of today’s most conspicuous trends is to treat the cladding of a building as a fully autonomous object, subject to nothing but its own aesthetic imperatives. Is there a more striking illustration of this trend than the Oklahoma Contemporary Arts Center, encased in a mantle of shiny aluminum fins that sparkle and twinkle like so many vertical sequins?

The $30 million, 54,000-square-foot building was completed two years ago and was to have opened on March 13, 2020—the very same day, alas, that Covid-19 was declared a national emergency. Not until the following July did it open its doors, and on a limited basis. For the world at large it is effectively a new building.

Oklahoma Contemporary (originally known as the City Arts Center) was founded in 1989 to offer exhibitions of contemporary art along with lectures, workshops and art classes. In 2014 it decided to build a new home, and Rand Elliott, a prominent Oklahoma City architect, was given the commission. The site, in a rather forlorn but now-improving neighborhood, was not the most promising of environs: a 4.6-acre plot bounded by an active railroad line and containing a century-old warehouse for a defunct lightbulb factory. Still, he made the most of it.

With no nearby landmarks to respond to, Mr. Elliott chose as his theme that characteristically Oklahoman subject, the sky. He devised a compact four-story cube whose sides he crinkled and pleated into a faceted 20-sided polygon. This he sheathed in a jacket of 16,800 anodized aluminum fins, each fastened in place at one of nine different positions, variously angled to the sun. The result is a constantly shifting reflectivity; at one moment the building looks like a faceted silver crystal and at another like an origami sculpture made of light. Mr. Elliott’s nickname for his design could hardly be more apt: “Folding Light.”

The old warehouse, with almost 10,000 square feet of useful space, proved to be an unexpected asset. Here room was found for the messier aspects of the educational program, such as wood and metal work, textiles, and above all ceramics, with its volatile array of kilns. Art studios are famously grubby but by separating them from the main building, even two years after the latter’s completion, the primary structure remains as immaculate as a hospital operating room.

The entrance to the main building is to the rear, a blunt acknowledgment that most visitors will arrive from the parking lot. One passes under a jagged porte-cochère and steps into a cheerfully welcoming space—there is no admission charge—that offers a range of attractions: a café, a gift shop, and a cozy “creative lounge” with a full art library so that freshly arrived visitors can immediately start brainstorming. Beyond is a range of five studios, including one for teenagers and another for toddlers, all with views of the three-block park that screens the building from the busy street beyond.

The main gallery is on the second story, an 8,000-square-foot space whose faceted walls trace the ins and outs of the building’s fitful southern flank. Instead of the customary featureless white box, it gives the artist and curator something to react against. Equally irregular is the black-box theater above the gallery on the third floor, a cavernous space with a gallery on two of its sides. (One can imagine that just as quirky Fenway Park produces a different kind of baseball, this space ought to encourage a different type of performance.) By far the building’s most attractive space is on this floor, an expansive north-facing dance studio with splendid views and even more splendid light.

As delightful as is this jubilee of angularity, Mr. Elliott is more successful when folding light than folding space. Virtually every interior wall sits at an acute or obtuse angle to the next. Jeremiah Davis, Oklahoma Contemporary’s artistic director, says he likes to challenge visitors to “find the right angle,” not an easy task. And there is no guarantee that a room with a sprightly 80-degree angle is going to produce an equally happy 100-degree angle in the room next door.

Yet there is something strangely familiar in the off-kilter geometry, recalling the makeshift improvisation of the artist’s loft, jury-rigged inside, say, an old mill, with partitions flung in every direction. Something of this informal style—call it Makeshift Garret—was clearly the goal here. It gives Oklahoma Contemporary its amiability, its relaxed tone, its sheer unbuttoned jauntiness. And it is that rarest of things—a building that is almost impossible to take a bad picture of.