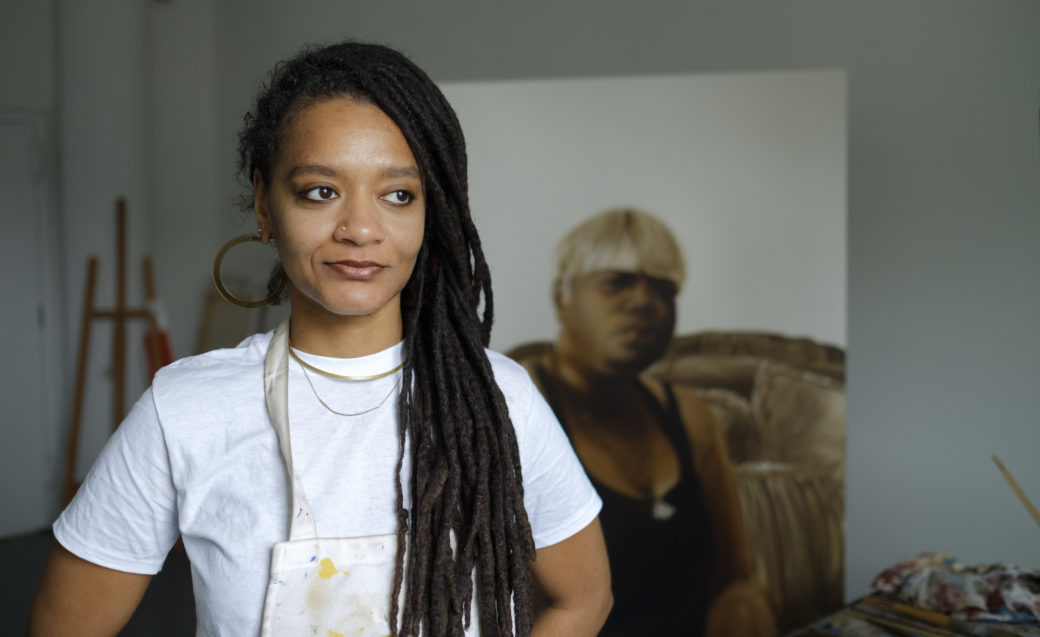 Running through May 19, the exhibition both depicts and celebrate Oklahoma City's rich black history, highlighting the black lives that have made and continue to make this city. Fazlalizadeh interviewed black residents of Oklahoma City's Northeast side, where she grew up, about their experiences living with daily oppressions, particularly racism and sexism. The exhibition includes wheatpaste and oil portraits of and quotes from those residents, historic photos and three videos.

"When I talk to a lot of black folks, it's this sense of invisibility that they feel," she said. "That people walk over them, or walk past them, or walk through them, or speak over them or speak through them and [they] aren't really seen. This show is about undoing that, amplifying current black life and current blackness to honor our black history and the fact that we are still here. We've made it through all these attempts at erasure and attempts at violence against us."

Fazlalizadeh juxtaposed bold, provocative words from the interviews with textures of black life and tender moments. "It's going to be a look at black history, but the historical blackness of regular black people," she said.

Oklahoma is Black is the final exhibition at Oklahoma Contemporary's fairgrounds location. The organization's new campus will open at NW 11th and Broadway this fall.

"Currently there are several artists addressing issues of identity and oppression on a national level," said Jennifer Scanlan, exhibitions and curatorial director for Oklahoma Contemporary. "What is particularly exciting about Tatyana's work is that it speaks specifically to Oklahoma City, the experiences of people here."

The exhibition name references Fazlalizadeh's America is Black, a series that began with a spontaneous piece installed on Oklahoma City's 23rd Street when Fazlalizadeh came home for the holidays in 2016.

"The election had just happened," Fazlalizadeh said. "I was like a lot of Americans: angry, afraid, vulnerable, feeling the need to do something, to take some action."

The piece paired large-scale portraits with the words: "America is Black. It is native. It wears a hijab. It is a Spanish speaking tongue. It is a woman. It is here, has been here and it's not going anywhere."

Fazlalizadeh said most Oklahomans reacted positively. "People said that they would stand outside of it for like an hour -- just be with it and take photos, because it made them feel seen. It made them feel safe. That is something I wanted to do -- I wanted to let people feel seen. That even though this election just happened, to not be afraid to know that you are here and you matter and that you are recognized, and I think people felt that."

Now living and working in Brooklyn, Fazlalizadeh has been internationally recognized for her artwork of portraits and words that give voices to people who are often marginalized, including women, people of color and the LGBTQ community. Her works can be found in cities around the world. Few know it began in Oklahoma.

"I found this beautiful black and white photograph of a child in a magazine," said Fazlalizadeh, who was born in Oklahoma City. "I wanted to draw it, but I wanted to draw it very, very well and render it as close to the photograph as I could. So, I took my time with it and I spent a few days on it. When I finished it, I showed it to my mom, and she was like 'This is amazing. Show this to everyone.'"

On that list was Quiquia Calhoun, an art teacher at OKC's Northeast High School, who gave Fazlalizadeh room to experiment with paint, pastels and pencils -- and portraits. Fazlalizadeh said her interest in drawing and painting people increased at University of the Arts in Philadelphia and as her career began, painting images of celebrities as a freelance magazine illustrator. Fazlalizadeh balanced building a portfolio with paying the bills, hostessing at a restaurant while cold-calling magazine art directors and hand-painting T-shirts for a clothing store.

The transition into her current practice began as she segued into painting murals and working with the community through work with Mural Arts Philadelphia. "I came from working in my studio, where you're just isolated sitting by yourself at an easel, just painting alone in your room to working outside, surrounded by people and working on this huge scale. It's just a really big difference, and there are joys that I find in both of them."

And then came Stop Telling Women to Smile, a street art project addressing gender-based street harassment. Fazlalizadeh said the series began about her own encounters, but, as responses began rolling in from around the globe, she decided she needed to include more voices.

The more she told those stories, the more her own began to be told. Fazlalizadeh has been profiled by the New York Times, NPR, MSNBC, Time Magazine, Buzzfeed, Vice Magazine and many others. She is a Forbes 30 Under 30 recipient, the Public Artist in Residence for the New York City Commission on Human Rights and the inspiration for Spike Lee's remake of She's Gotta Have It for Netflix.

A few years ago, Lee Instagrammed one of Fazlalizadeh's street pieces, asking "Who is this artist?" Friends put them in touch, and Lee both began buying her art and using it in his movies. "He really likes me, and he really believes in my work," she said, so when he approached her with a script for the She's Gotta Have It remake, she was in.

The show's main character is an artist. All of the oil paintings featured in the show are by Fazlalizadeh, who also consulted with the writers. Some of the paintings were works she'd already done; some were created specifically for the show. "It was very interesting, very new obviously, a challenging experience. Never thought in a million years I'd be doing something like that," she said.

Between She's Gotta Have It and Stop Telling Women to Smile, Fazlalizadeh, who left Oklahoma as a 17-year-old going to art school, returns as an internationally renowned artist.

"I do know this is a very different audience than I think anywhere that I've shown before," she said. "I love black people, and you are going to see that and feel that, but at the same time, it has to be hitting in some ways. So, for me, it's like, doing both, making this sort of soft, tender thing, but also this very hard-hitting thing, and doing so in a way that has some type of effect on the audience, no matter who it is."

She hopes the art will work on multiple levels. "It's been drawn by someone who's also black, who's also a woman, who's also from Oklahoma, who's from this community. I think that who the artist making the artwork is matters - because white people paint black people all the time - but it's different when the artist is reflecting someone. That intention comes there, that empathy comes there, that compassion, that history of experience comes through that."

More than 500 people attended the exhibition’s Feb. 21 opening reception. Additional programming includes two free, family-friendly Second Saturday events (March 9 and April 13), in which visitors’ hand-drawn portraits will be wheatpasted on the walls of the Learning Gallery.

Members of the Oklahoma City community will lead Gallery Talks at 6 p.m. March 5, 12 and 19, April 9 and 23 and May 7. At 6 p.m. April 18, Fazlalizadeh will hold a public conversation with A-lan Holt, director of the Office of Diversity in the Arts at Stanford University.

Admission to the above programming, the exhibition and the Learning Gallery is free. Fazlaliadeh's paintings, wheatpasted large-scale drawings and video interviews will be on view at Oklahoma Contemporary through May 19.

High-resolution photos of the artist, prior works and art from this exhibition can be found at bit.ly/OC_TFmediakit. Interviews with the artist, OKC portrait subjects, curator or Oklahoma Contemporary staff can be organized through Director of Communications Lori Brooks (lbrooks@okcontemp.org). Past press releases and information are archived at oklahomacontemporary.org/media.

Oklahoma Contemporary is an inclusive center for the arts where people of all ages and backgrounds can experience art, encounter new ideas and ignite their creative potential. Through visual art exhibitions, performances, public programs, community-building initiatives, outdoor installations and special events, we create opportunities for everyone to come together in celebration of contemporary culture and artistic expression. With year-round classes and camps across multiple disciplines, the arts center’s education programs encourage youth and adults to express their ideas across a variety of media and learn new skills.

In March 2020, Oklahoma Contemporary will open a spectacular new center on a 4.6-acre campus at NW 11th and Broadway in Oklahoma City. Our 6,000 square foot main gallery, classroom studios, performance spaces, community lounge, café and outdoor spaces ensure that there will always be something new to see and experience. Oklahoma Contemporary is your arts center. Exhibitions are always free. You are always welcome here.