What Goes Up Must Come Down: Cloud City Begins De-Install

Not counting the tens of thousands of people who drove by daily on Broadway Avenue, more than 7,700 people visited Cloud City, a large-scale art installation by Tomás Saraceno, installed adjacent to the site of Oklahoma Contemporary’s future art campus from Sept. 8 to Oct. 30.

Cloud City begins its de-install this week, using a New York-based crew who have put up and taken down the sculpture each time it’s been shown (on the rooftop of New York’s Metropolitan Museum of Art and at the Green Box Arts Festival in Green Mountain Falls, Colo., in addition to NW 11th and Broadway in Oklahoma City).

During its seven-week Oklahoma City run, 4,500 visitors toured the interior of Saraceno’s “utopian city in the sky.” Another 3,250 visited the installation when the interior was closed.

A media kit, including this release, time-lapse video of Cloud City’s installation and high-resolution photos of the sculpture and events, is at bit.ly/OCCloudCitydeinstall. (Oct. 31, 2016) 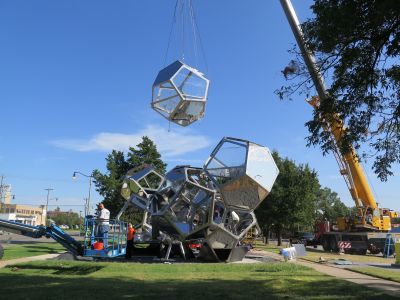