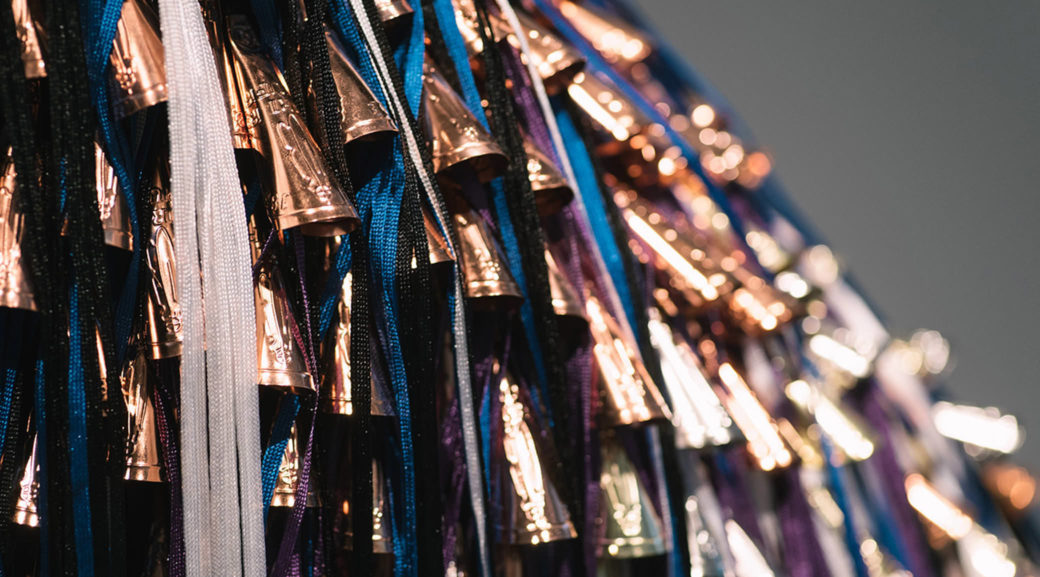 Jeffrey Gibson, Speak to Me 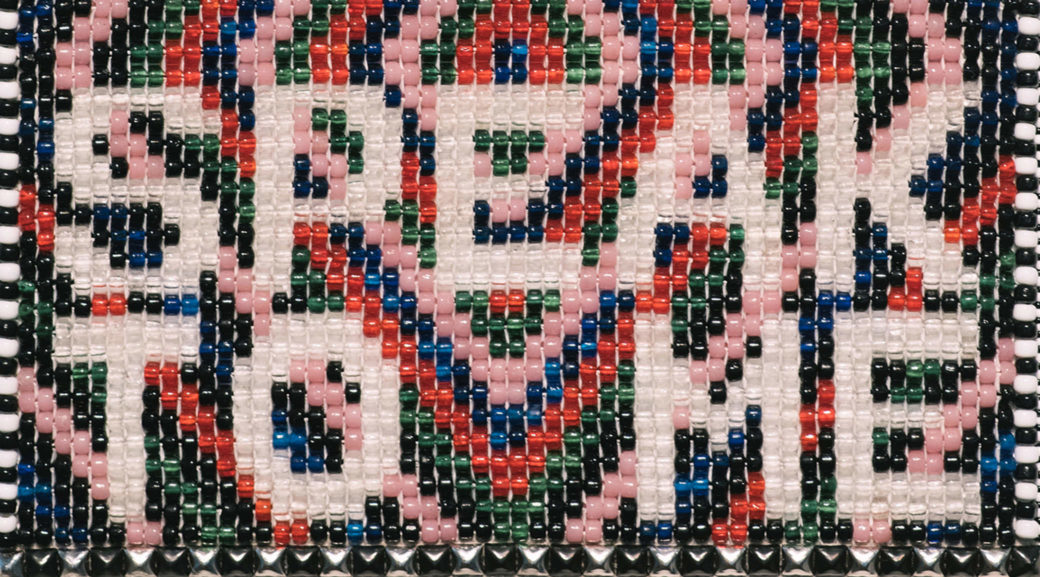 In Time We Could Have Been So Much More 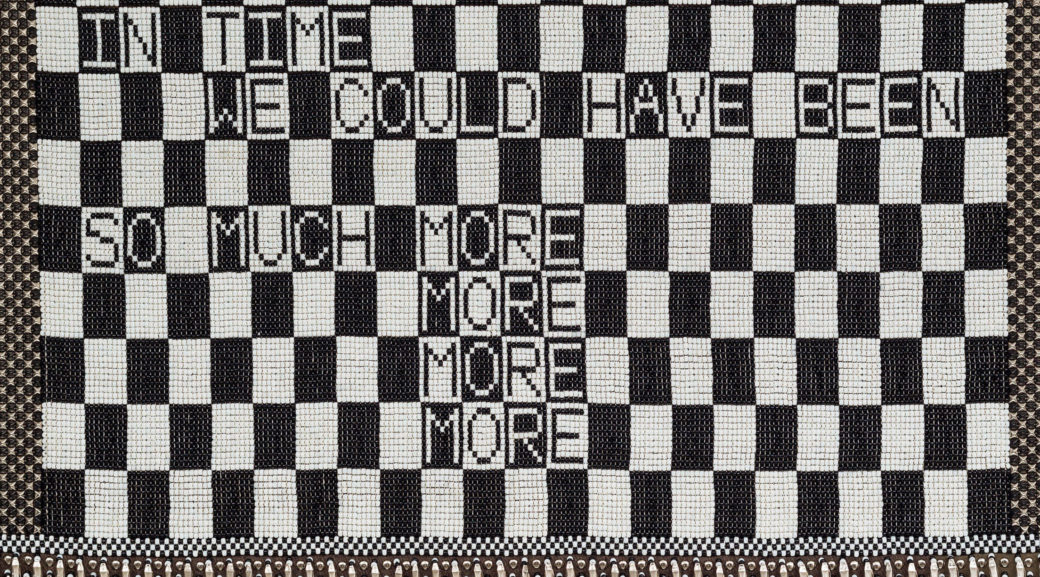 Jeffrey Gibson is a multimedia artist whose practice includes painting, sculpture, fiber, ceramics, video and performance. His solo exhibition, Jeffrey Gibson: Speak To Me, featured artworks that draw upon his Native American heritage (Choctaw and Cherokee) and intertribal aesthetics and traditions. He effectively combined this mix of references into unique artworks that additionally employed text to address issues and events beyond his own subjectivity. Gibson’s artworks draw thoughtful attention to these cultural and historical traditions while affirming their vitality and relevance to contemporary life.

Gibson’s mother, Georgia Gibson, is originally from Brigg’s Community, just outside of Tahlequah, but he did not grow up in Oklahoma. Gibson grew up moving around the world due to his father’s job and lived in many places, including the United States, Germany, Korea and the United Kingdom. His connection to a Native community became increasingly important to him when he left home to study at the Art Institute of Chicago and later at the Royal College of Art in London. He began to research intertribal aesthetics and Native histories early in his career and became particularly interested in the powwow culture that some of his family members took part in.

A powwow is a social gathering that happens across the country throughout the year. It is an opportunity for community and family members to reconnect, exchange and share through mostly competitive dancing, singing and drumming. Gibson was inspired by the unique and spectacular dance outfits that he feels inherently challenge notions of what traditional and contemporary can be with regard to Native American cultural aesthetics. It immediately made sense to him to source many of his materials from the vendors that supply the makers involved in the pow wow circuit and community.

The centerpiece of Speak to Me was a video, titled one becomes the other, that Gibson produced during a residency at the Denver Art Museum. one becomes the other brought together members of the Denver pow wow community with objects from the museum’s vast Native American collection. The video showed a series of conversations between the individual dancers and their chosen objects. The objects were addressed as living beings, and the expected notion that they are inanimate objects only to be looked at was subverted through the unscripted and genuine dialogue captured in the video.

This idea — that we can have conversations with objects, that objects can tell stories — extended to the rest of the artworks in the exhibition. From the ceramic heads that reference the often-untold stories of the Mississippian culture to beaded panels with quotes from pop songs that relate to Gibson’s search for his own identity, each artwork had a narrative, which often shifted and changed in relation to the viewer’s own experience.

Gibson is an internationally known artist whose works are in the permanent collections of many major art museums, including the Museum of Fine Arts, Boston, the National Gallery of Canada, the Smithsonian Institution and the Denver Art Museum. In 2013, he had one-person exhibitions at the ICA Boston, National Academy Museum NYC and the Rollins Museum. Through Aug. 2018, he will have a one-person internationally traveling exhibition originating at the Denver Museum of Art. We were honored to present this very personal exhibition of his work here in Oklahoma, home of his family’s roots. Gibson had visited the state many times and had worked with local artists as a mentor, but had never had a solo exhibition here.

This exhibition was sponsored by the Oklahoma City Convention and Visitors Bureau.

The Learning Gallery offered visitors additional ways to interact with Jeffrey Gibson's Speak to Me. The gallery included touch tiles for guests to explore how the materials Gibson uses feel and sound, a threading station for families to create their own art, and a popup library in collaboration with the Metropolitan Library System.

In addition to the hands-on materials, visitors could view Lester Harragarra's large-scale photographs from powwows and other cultural gatherings. These images illustrated how Gibson's materials in Speak to Me are sourced from Native American culture. 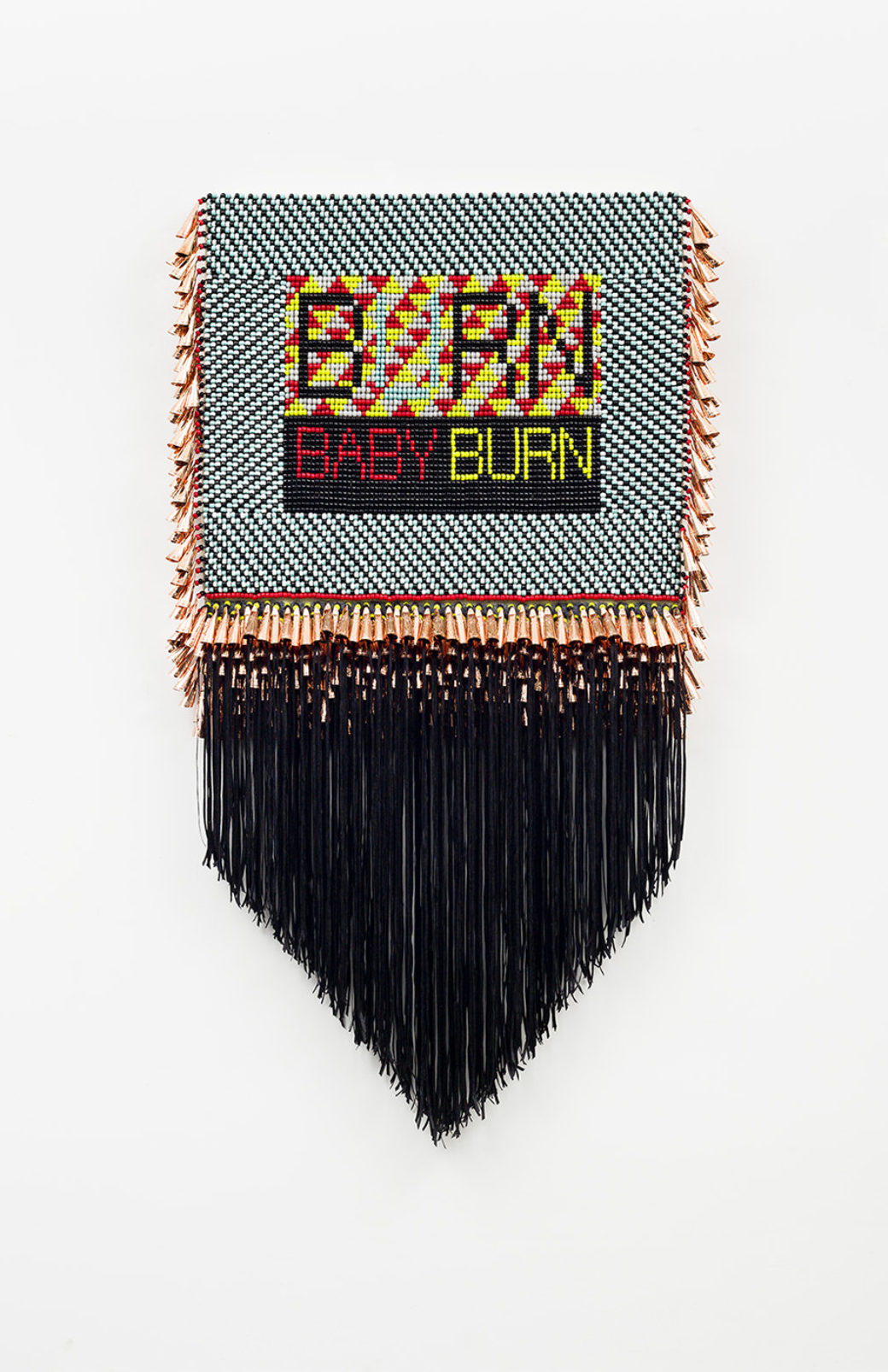 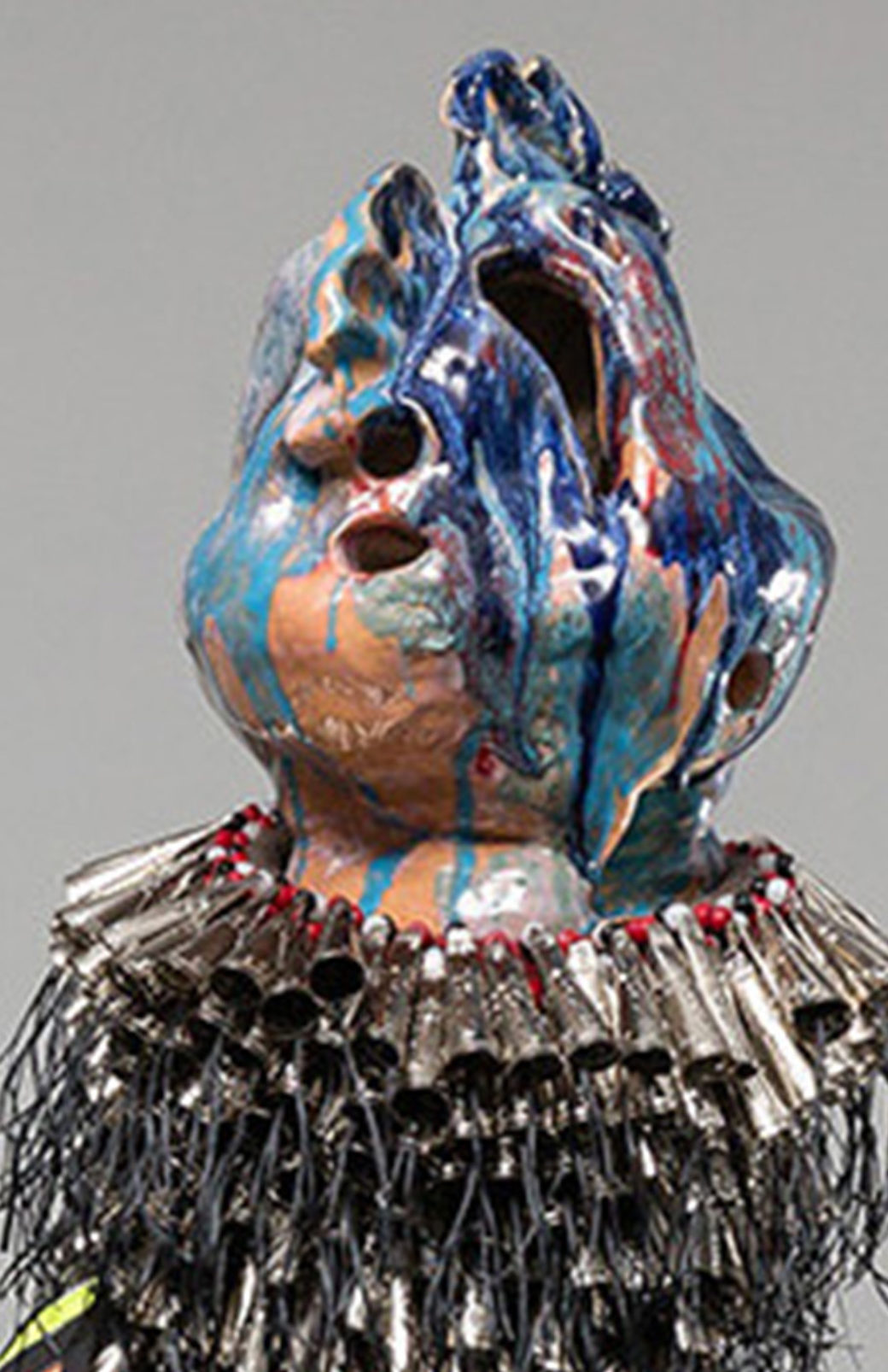 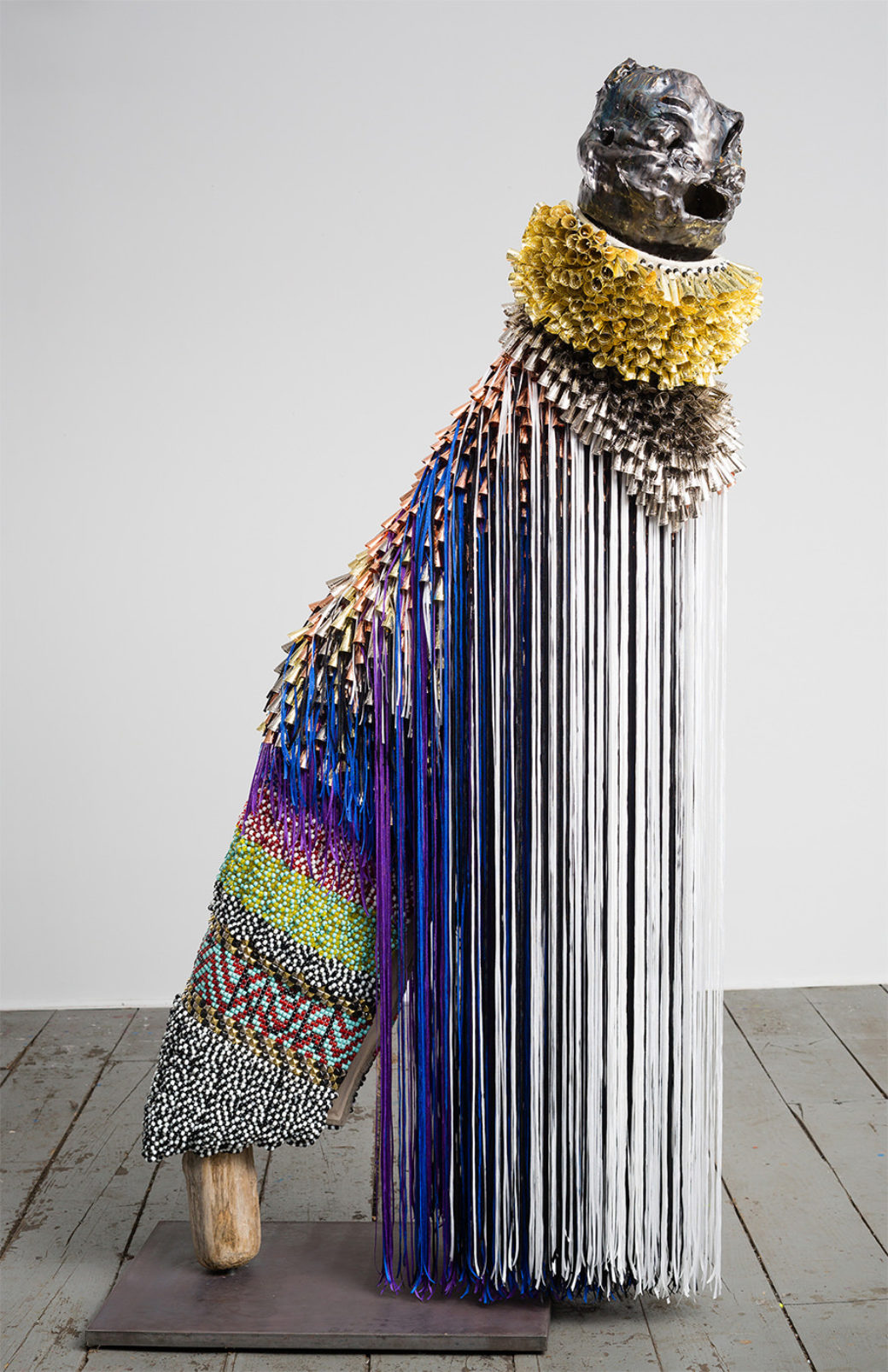