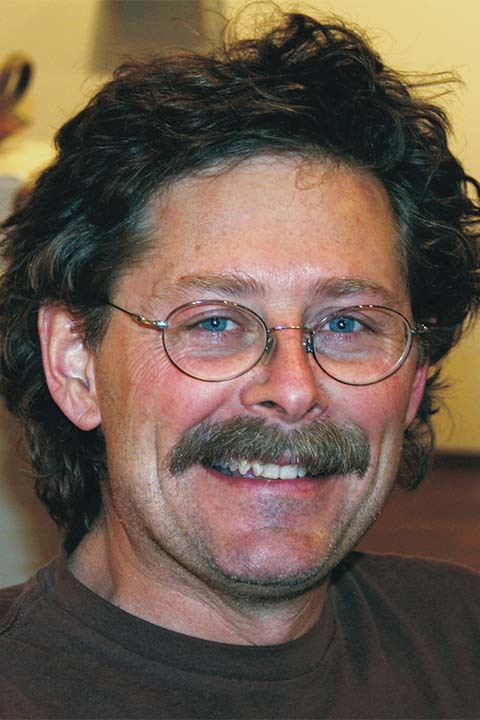 Doug Casebeer is the ceramics artist in residence at the University of Oklahoma. He exhibits, demonstrates, lectures and builds kilns around the world — from Chile and Jamaica to China and Italy. He received the Walter Gropius Master Artist award from the Huntington Museum of Art, is an honorary member of the National Council for the Education of Ceramic Arts and is a member of the International Academy of Ceramics in Switzerland.

His artwork is in private and public collections around the world, including permanent installations at the Yingge Ceramics Museum in Taiwan and the Shigaraki Museum of Contemporary Ceramic Art in Japan. Casebeer has been a ceramics consultant for the United Nations and the German government.

After graduating from Norman High School, he attended the University of Oklahoma and Wichita State University and earned a Master of Fine Art from Alfred University in New York. Before returning to Norman, he was the artistic director of the Anderson Ranch Center in Colorado for 35 years. 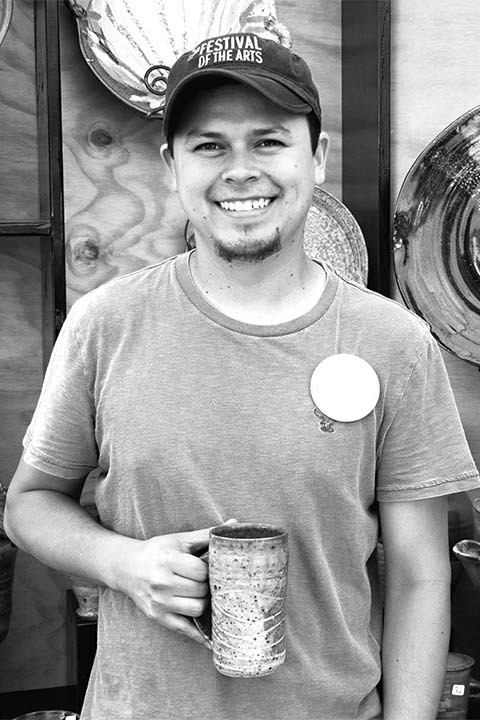 Hector A. Cobos Leon is a first-generation potter who grew up in the Oklahoma Panhandle and developed a love for the arts at a young age.

He is mesmerized by dirt — dug out of the earth to fulfill its purpose of becoming a vessel — and he hopes his work triggers creative thoughts for people who see and use it. He received a Bachelor of Arts from Oklahoma Panhandle State University and is now a full-time artist, living in Oklahoma City's Paseo Arts District. Smitten with early American pottery, Hector travels to the East Coast every year in search of potteries and clay studios. He makes tableware for everyday people as well as restaurants.

His ceramics have been exhibited in galleries across the country. 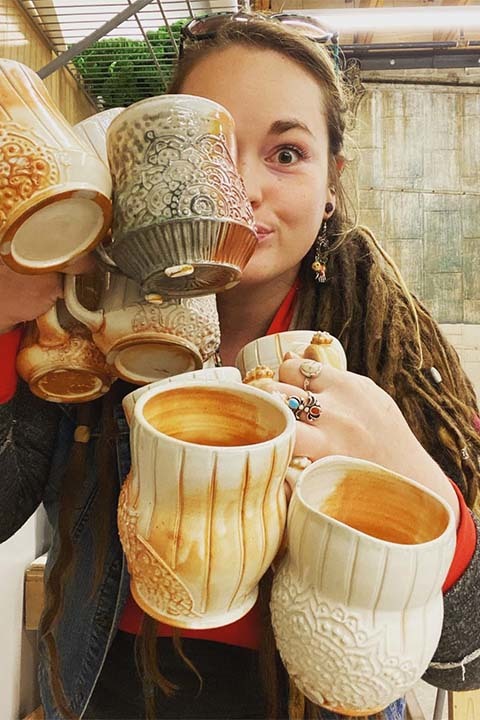 Liv Egan was born and raised in Oklahoma. Originally from Tulsa, she now lives in Oklahoma City as a working artist. She graduated from the University of Oklahoma with a Bachelor of Art in Art Therapy with an emphasis in ceramics. While at OU, she worked as the director of the student art gallery, was the studio technician at the John Frank Ceramics Facility and taught children, teen and adult classes at the Firehouse Art Center. Liv started working at Oklahoma Contemporary as a Camp Contemporary studio assistant in summer 2017 and went on to become an instructor.

Liv works predominantly on the potter’s wheel, creating functional pieces that evoke curiosity and intimacy through our sense of touch. 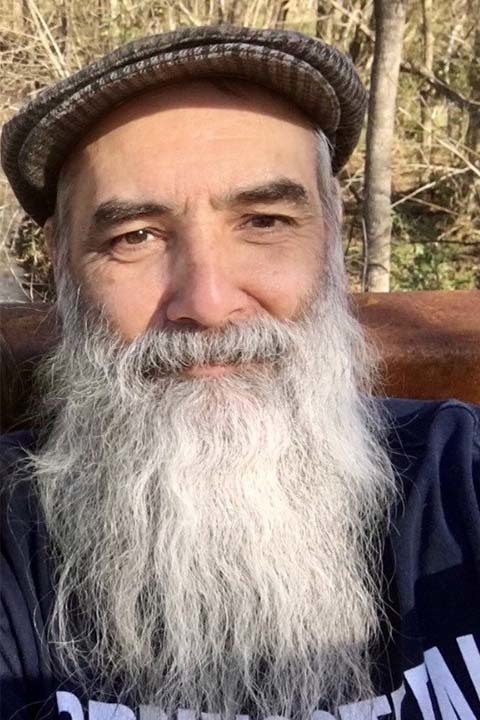 Dan Harris worked as a baker for many years before becoming a potter in 1977, and says the work ethic of being a baker directly influenced who he is as a potter. Bakers — like ceramicists — don’t just follow recipes; they utilize all their senses, and both fields wrestle with the predictability of daily repetition vs. the haphazard impact of chance. Dan loves the opportunity to begin again every day, knowing that something entirely new might happen.

Selected exhibitions include the Mulvane Art Museum in connection with NCECA National Conference, 36th and 37th Annual Pottery Show at the Art School at Old Church and Pizza Man Pottery Show at The Depot.

Dan received a Master of Fine Art from the University of Oklahoma, but his crowning achievement is being a middle school art teacher for 30 years. 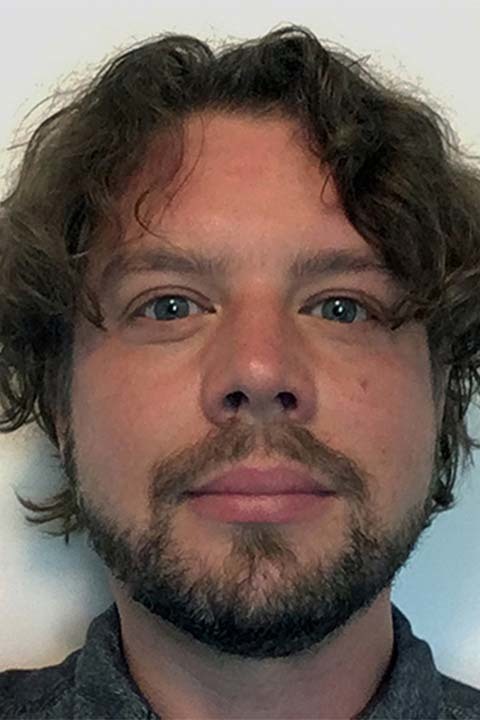 The timeless quality that can be found in ceramic vessels and objects — the strong reflection of humanity that reveals our history, values and spirit — drives Eric’s work. Clay is a uniquely intimate material that allows one to create through the act of touch, and clay’s infinite possibilities of abstraction and expression inspire him. Historical ceramic iconography, modern painting, sculpture and contemporary design all merge together and inform Eric’s work.

He received a Bachelor of Fine Arts from Syracuse University, and then continued with post-baccalaureate studies at Skidmore College in Saratoga Springs, N.Y. He completed his Master of Fine Arts in Ceramics at Southern Illinois University, Edwardsville.

Eric lives and works in the greater Oklahoma City area, teaching ceramics at the University of Central Oklahoma and exhibiting his work throughout the United States and abroad. 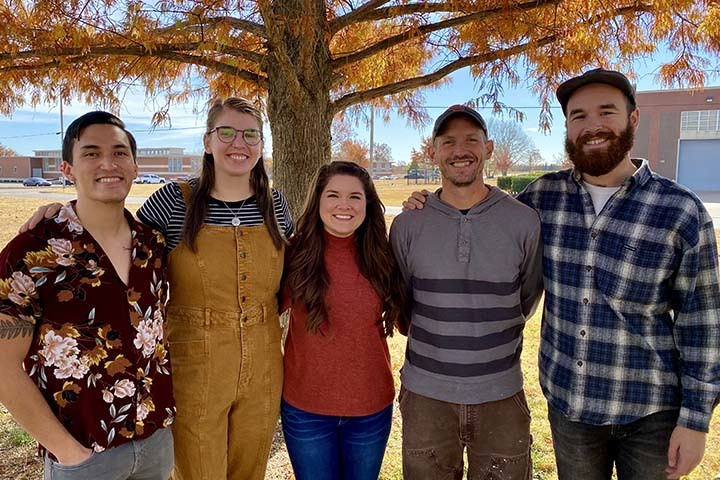 The Red Clay Faction is the recognized ceramics club of the University of Oklahoma. It promotes the visibility of ceramics to OU’s campus and the general public and raises awareness of the ceramics medium by hosting events and activities that invite people to engage with clay.

Stuart Asprey is a nationally recognized studio artist and educator. He is an associate professor of ceramics and the undergraduate coordinator in the School of Visual Arts at the University of Oklahoma. His artwork uses ornamentation and narrative as artistic allies in the creation of VOCOs (Vessel Oriented Ceramic Objects). These objects are graphic clay canvases that question past actions, events and people. They can be irreverently witty, gut-wrenchingly serious or filled with parody. They use history for arsenal: our folklore, politics, science, human geography and, most importantly, our popular culture.

Stuart received a Bachelor of Arts from Humboldt State University and a Master of Fine Arts from the University of Oklahoma. Over the past 10 years, he has participated in over 100 art exhibitions, including solo shows at the Morean Center for Clay in St. Petersburg, Fla., and the Belger Art Center in Kansas City, Mo. During the same period, he was awarded a Best of Show title in nine invitational and juried exhibitions highlighted by Un-Wedged in Seattle and Visions in Clay from the San Francisco Bay Area.

His work is carried at the LUX Art Center in Lincoln, Neb., and can also be seen at stuartasprey.com.

Marissa Childers was born and raised in the small town of Florence, Ala. She received a Bachelor of Fine Arts from the University of North Alabama in 2019 and, after graduating, she worked as a ceramics intern at the Anderson Ranch Arts Center. Currently, Marissa is a third-year graduate student at the University of Oklahoma, pursuing a Master of Fine Arts in Ceramics.

Her work explores the intimate moments we share with one another through functional handmade objects. Surface ornamentation and texture evoke a sense of comfort and beauty and draw viewers in to create a moment of joyful reflection. Whether the work is influenced by the pattern on her grandparents' curtains or the woven threads of a blanket, each piece is a little reminder of home.

In addition to being a graduate teaching assistant, she has taught classes at Oklahoma Contemporary and Norman Firehouse Art Center. Marissa has received numerous research grants, including the NCECA Graduate Student Fellowship. Marissa’s work has been exhibited around the U.S. and, in November 2019, was published in Ceramics Monthly.

David Morrison was born and raised in Batavia, Ill., a western suburb of Chicago. He attended St. Olaf College in Northfield, Minn., where he received a Bachelor of Fine Arts with a concentration in Asian Studies. After graduating, he was an artistic intern at Anderson Ranch Arts Center. Following his time at Anderson Ranch Arts Center, he was a Fifth Year Emerging Artist at St. Olaf College.

He is currently a Master of Fine Arts candidate at the University of Oklahoma. He creates functional and sculptural ceramics that explore consumerism through present and future landscapes.

Chrystal O’Boyle has a lifelong love of the arts. Born and raised in Fayetteville, Ark., she received her bachelor’s degree from the School of Art at the University of Arkansas. Currently, she attends the University of Oklahoma as a post-baccalaureate student studying ceramics.

Chrystal enjoys working with students of all ages and,in 2018, she joined Community Creative Center and taught classes in ceramics, painting and glass fusing. She is in her fifth year of choreographing, designing and instructing the Fayetteville High School color guard program. She enjoys creating her own works of art and hiking. 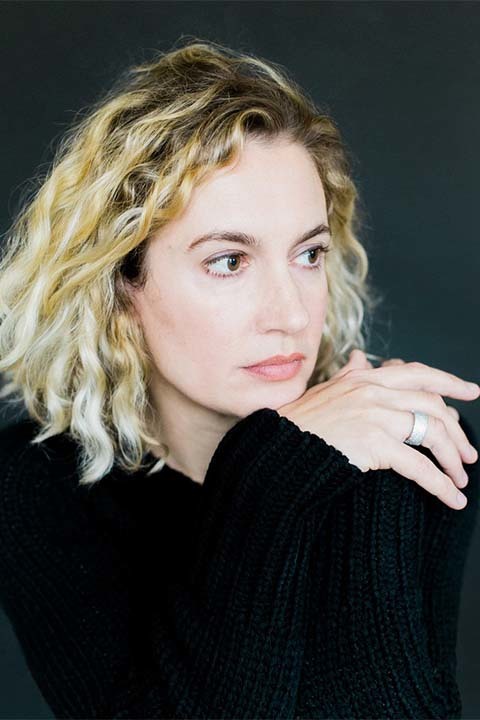 Emily Reynolds is a mixed-media artist who works primarily in slab-built ceramic sculpture. Often totemic in nature and composed of simple geometric shapes, her work attempts to evoke recognizable subjects — often the human figure — in the most stripped-down way possible. She is interested in the intersection between the modernism of the 20th century and the art of early human cultures.

A native of Boston, she is the owner and curator of Anonyma Fine Art, a gallery dealing in modernist paintings, drawings and sculpture by lesser-known, self-taught and unidentified artists from around the globe. Her curatorial work was the subject of a solo exhibit, The Art of Collection at Artspace at Untitled in Oklahoma City in January-March 2019 and has also been featured in 405 Magazine, Art Review Oklahoma, The Journal Record and Oklahoma Gazette. Earlier this year, she taught a four-week class, Art Collecting for Everyone, at Oklahoma Contemporary’s Studio School.

Reynolds’ ceramic sculpture is held by private collectors across the state and country and as far away as Bangkok, Thailand. She sells her work online via Chairish and 1st Dibs, as well as in person at her studio in midtown Oklahoma City. 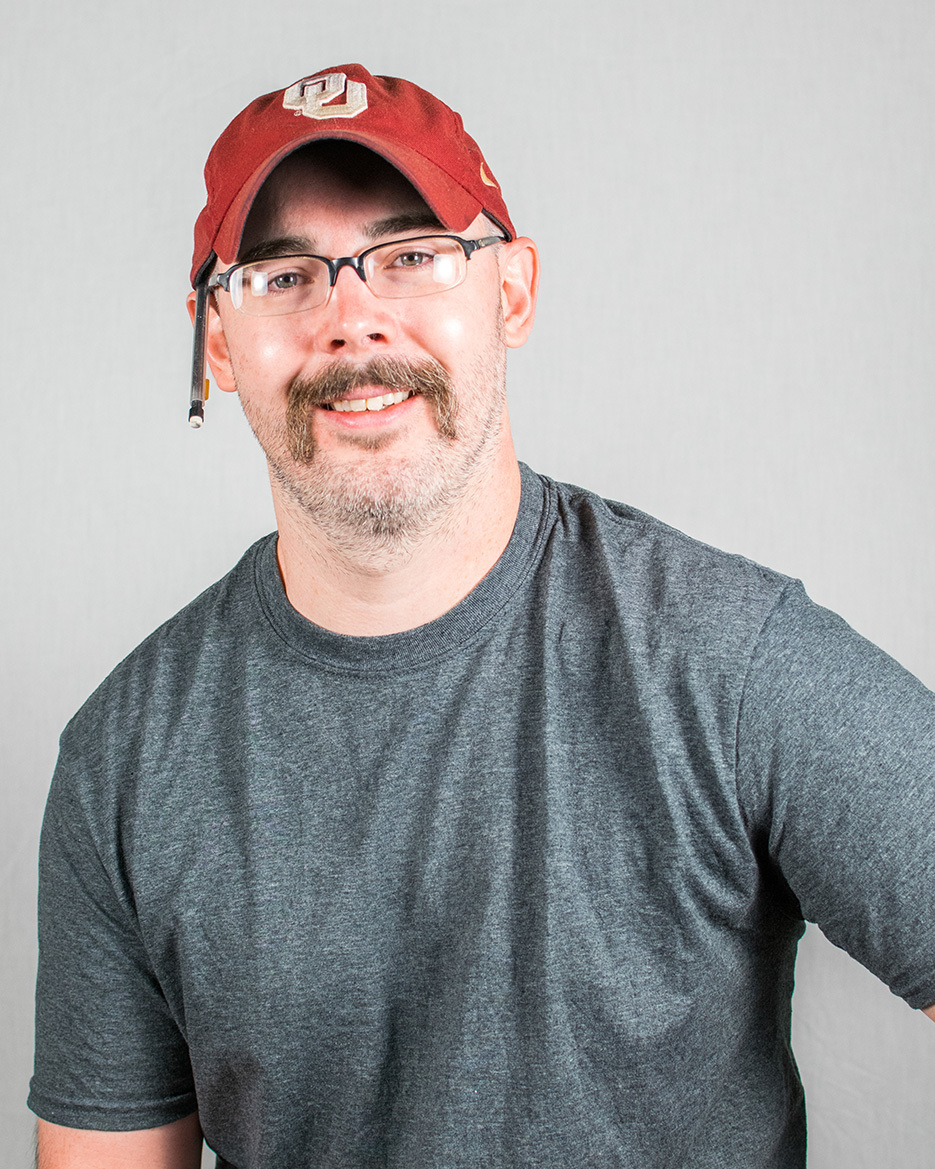 David Stevens manages the Ceramics Program and Studio at Oklahoma Contemporary. He provides overall onsite management of the ceramics studio and leads the development of class curriculum, visiting artists and the ceramics artist-in-residency program. He was formerly a professor of ceramics and 3-D foundations at the University of Oklahoma, where he worked to revitalize the ceramics program and raise its national visibility. As an artist, his ceramic work is shown across the country and is represented in both public and private collections internationally. He has taught workshops and led demonstrations through the ArtMoves program, the Oklahoma Arts Council and at the National Council on Education for the Ceramic Arts' annual conference. David earned a Master of Fine Arts with an emphasis in ceramics from the University of Oklahoma and graduated Cum Laude from Oklahoma City University. He is a member of ArtAxis, NCECA and the Honor Society of Phi Kappa Phi.

Back to Ceramics Sale