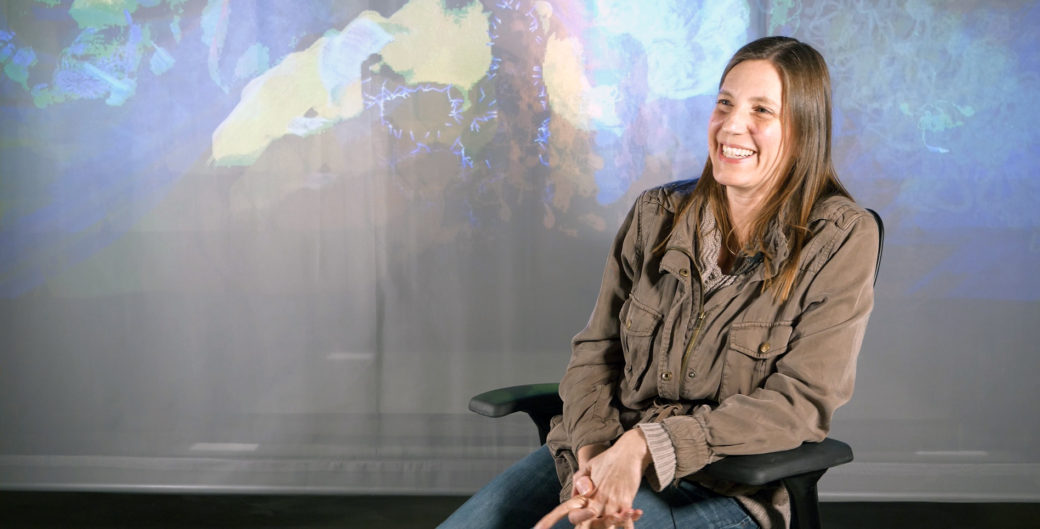 The Bright Golden Haze artist on the systems that shape us

We spend most of our waking life in front of screens, and Camille Utterback would like us to consider our place in this arrangement. Computer monitors didn’t occupy much of her field of vision growing up in Boston, but today the San Francisco-based artist creates software to produce interactive digital environments that explore the possibilities and problems within the pixels that color our world.

“In the end, it’s not really about the technology or computers for me,” Utterback said. “It’s about how you think about yourself in relation to systems. The code I’m writing is a set of rules. And it’s interesting for me to create a situation where you are the participant in that system. Because it’s reacting to you, you have to kind of think about why you might be doing this or that: ‘What happens if I stick my hand out, or touch something? How is my presence having an impact on this system?’”

Utterback’s Entangled (2015) is among the works exploring light and place in Oklahoma Contemporary’s inaugural Bright Golden Haze exhibition, opening March 13. In today’s #ThursdayThree installment, she talks about making space for the body in a digital age.

What can visitors expect from Entangled?

It’s a piece that builds on drawing systems I've been doing for a while. They use cameras on the ceiling to watch the space, and, based on how people are moving in the space, all these different images evolve. It's often based on people's trajectory, their path. Things get added to the system, and you can push them around.

Part of my work lately has been questioning, or just getting tired of, these screens everywhere — flat screens that really don’t use our depth perception at all. So part of what I wanted to do with this piece was create a display situation that was much richer. I got excited about projecting through this set of scrims. So part of what's different about this drawing system is it's not a projection onto a wall. The opportunity there is people can see each other through the materials. So I decided to make a work that is two-sided, with people on both sides of the scrims influencing the system.

But you can only influence what is being projected from one side, not the other. So, you are in control of some aspects of this situation but not all of them. And I think that is also stemming from kind of getting more and more concerned about how a lot of our technological systems are completely ego maniacal — it's all about you. It’s this illusion that you’re in control of everything. So, I want people to think a little bit about what it means when you’re part of a system, but you don’t have complete control. In fact, it’s a shared space with the people on the other side of the scrim. So you have to negotiate that in a real, physical space.

“In the end, it’s not really about the technology or computers for me. It’s about how you think about yourself in relation to systems."

What kind of digital systems shaped your world growing up?

I’m kind of old [laughs]. I remember a time before people had computers in their houses at all. Then I was maybe 10 or something we got an Apple II, and I used it to do my math homework. I wrote a program to calculate the surface area of cubes, which we had to do over and over again. That was really starting to get boring, so I wrote a program. I think my parents were trying to figure out if that was cheating, or if I was really doing the homework. 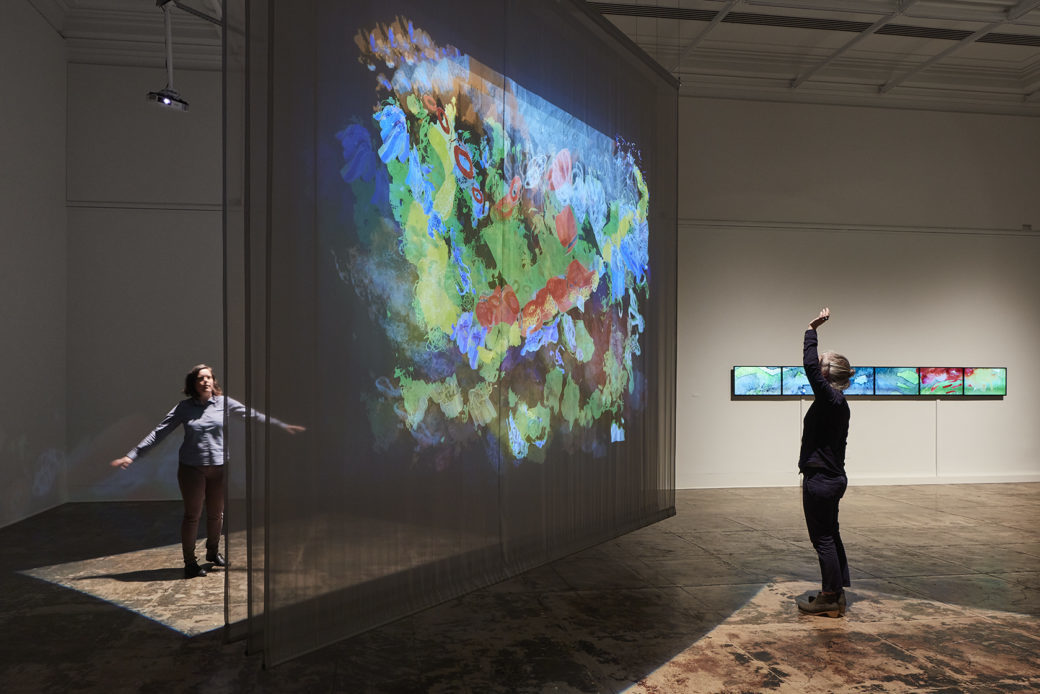 Then I fell into the statistic of girls who decided technology and science isn’t really cool. I remember going to a programming class when I was 13 because I wanted to learn more about it, and I just — quit. So it's interesting to look back on that. What was going on? What were the subtle cues I was getting that I didn’t belong? I wanted nothing to do with computers all the way through college. I thought they were horrible, but, granted, they were a lot less powerful and the graphics were a lot less interesting than they are now.

When I got excited about them again was kind of in the early era of the internet becoming popular and these things called CD-ROM, which some may people remember. I liked the idea that you could, within this CD-ROM, create a whole little world that had maybe sounds, graphics and a way of creating stories in it. It’s the idea that I could create a whole situation: At that point it wasn’t like a camera, but you could click or you could use text, and I got really excited because I felt like that was the kind of world where I could use my artistic skills.

How important is the role of play in your work?

I would define play as a kind of experimental questioning, and testing is really important to how we learn. I also think there’s a political aspect to that, too, which is that you’re testing the boundaries of things when you play. Like, “How much sand can I pile up before it falls over?” It’s about finding the limits of things or finding a new way to engage in something.

I like creating systems that reward play, where something exciting is happening depending on what you’re doing. You can run faster, or you can move slowly. You can try to engage with others. I feel like that encourages people again to ask those questions and test things out. And that, to me, is such a wonderful thing to be adding into the world: more people engaging that way with their surroundings and each other.