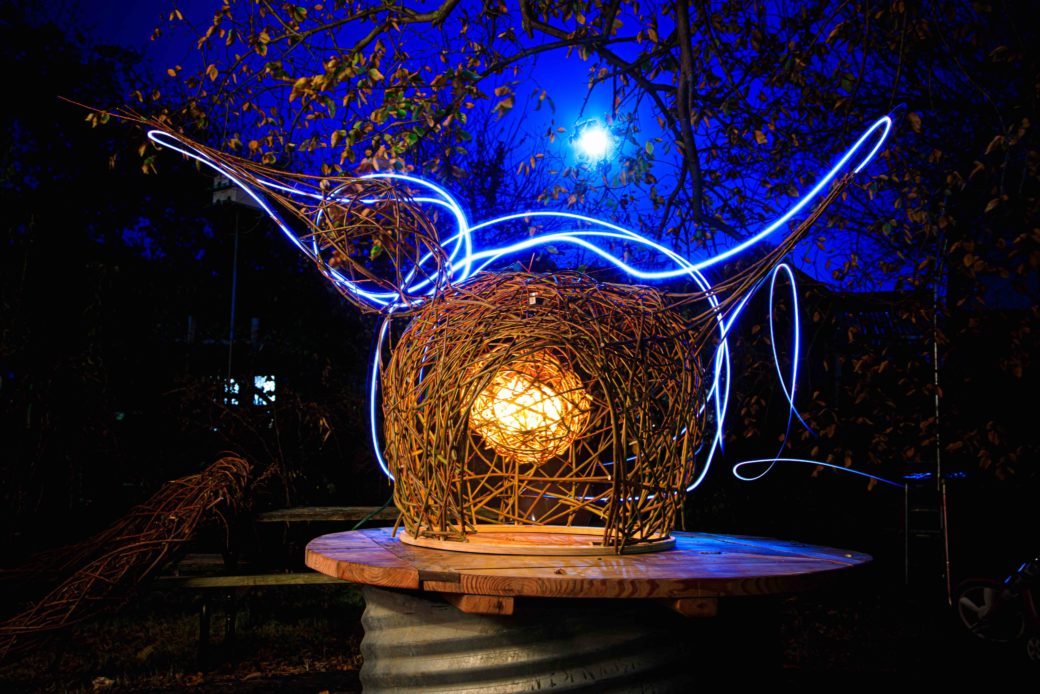 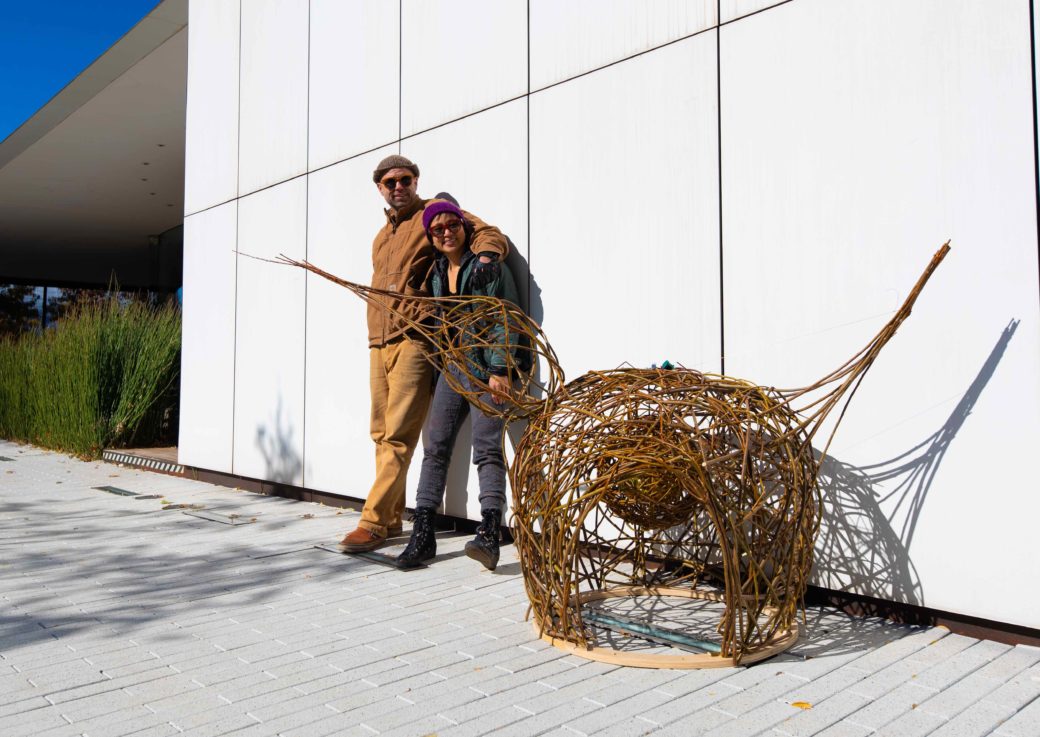 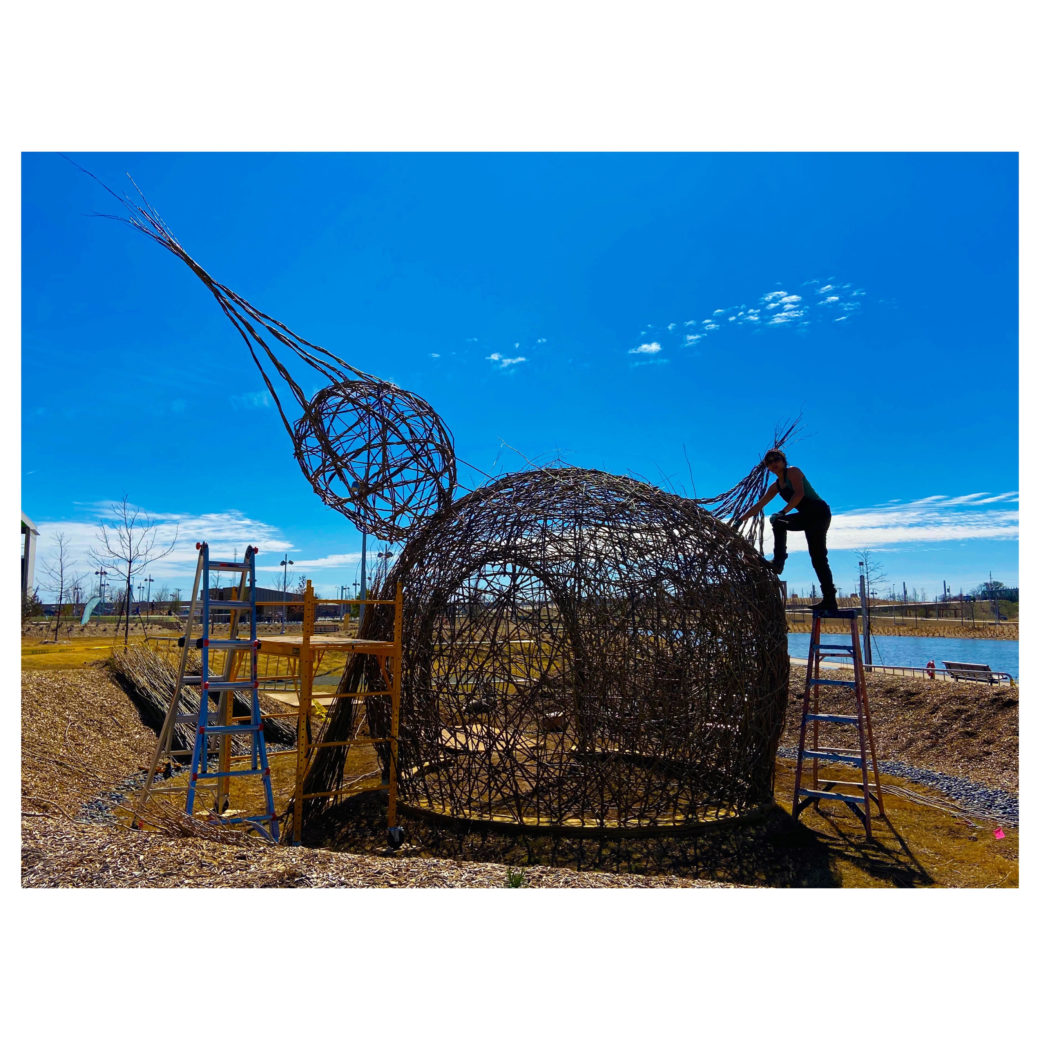 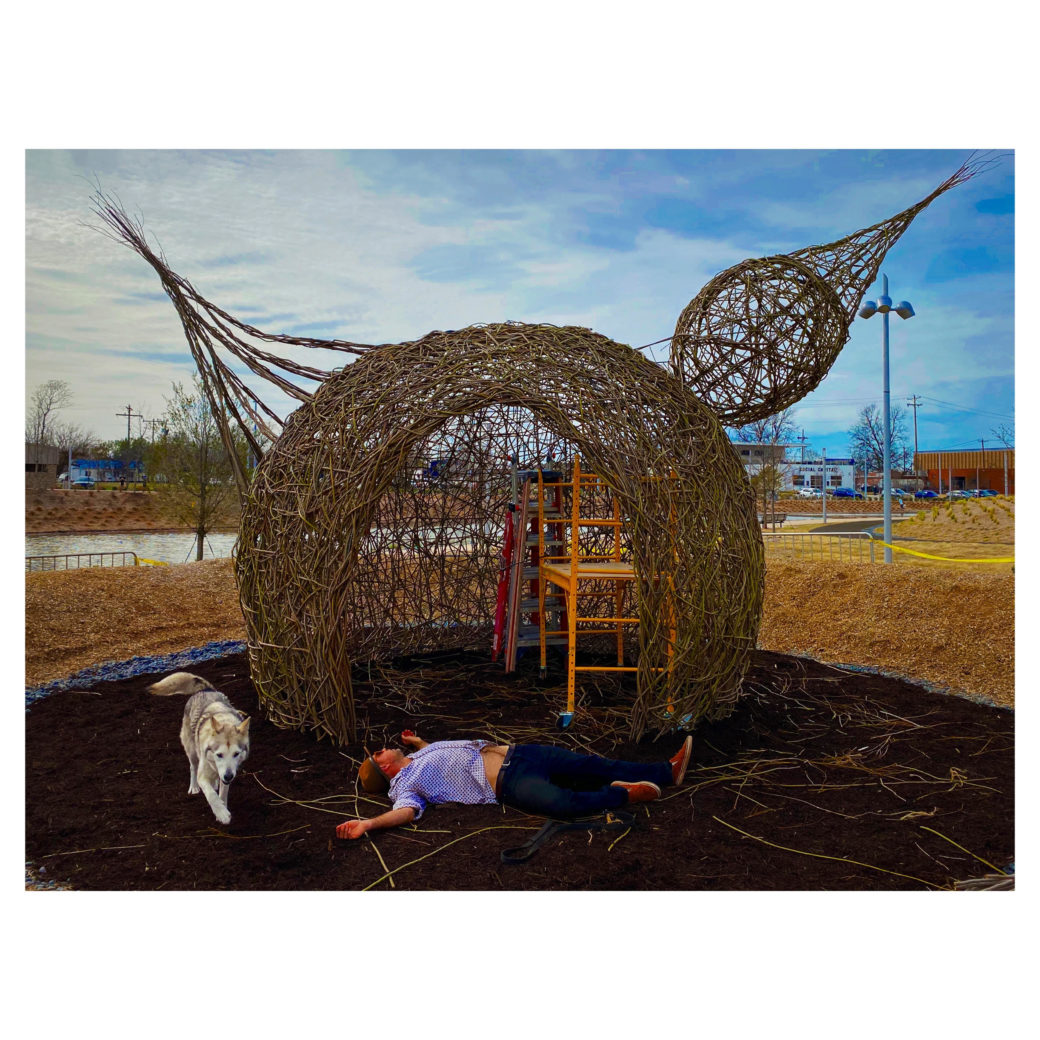 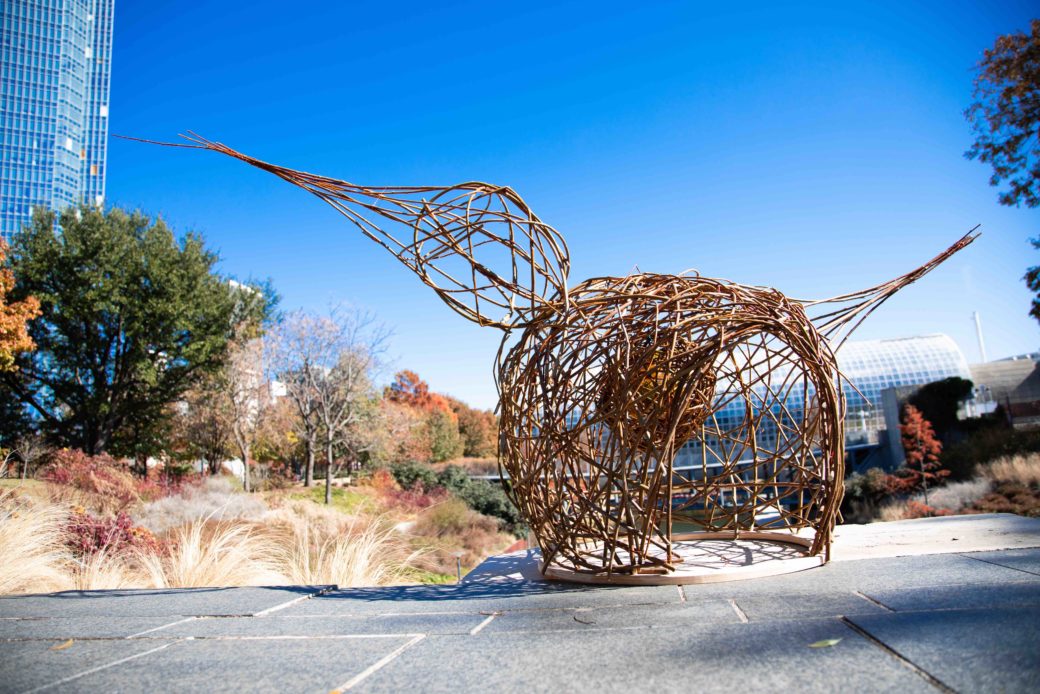 Over the last few decades, artist Denise Duong has been visited repeatedly by the same bird. You’ll find it perched in her vibrant paintings of everyday wonder or fluttering in the background of her whimsical pen-on-paper drawings: a quick series of circles, flanked by exaggerated points to suggest its beak and tail.

The bird resembles an American robin or house sparrow at first glance — but nestled in Duong’s surrealist swirl of flora and fauna, it feels more like a dispatch from a dream than a depiction of the world as it is.

“It’s a very comfortable motion for me,” Duong said. “I find it has a perfect symmetry of circular movement and lines. I think there's something nostalgic about it as well. It has a little play on childhood. These little birds have accompanied me through every aspect of life.”

Duong’s feathered friend nests at Scissortail Park as an interactive public art installation in conjunction with Oklahoma Contemporary’s now-delayed inaugural exhibition, Bright Golden Haze. The Unexpected Us is a collaboration with her partner and fellow local artist Gabriel Friedman, presented as part of Bright Golden Haze: Reflections, a series of satellite exhibitions, installations and performances across Oklahoma City celebrating light and place.

The result is a massive woven willow stick sculpture in the shape of Duong’s signature bird, featuring a golden pulsating light suspended within a willow orb at the center. Visitors enter the structure through a single entrance to the center, where a secondary woven willow sphere contains a golden LED light, pulsating at the speed of a gentle heartbeat.

Exploring the themes of Oklahoma Contemporary’s inaugural Bright Golden Haze, the collaborative work sparks visitors’ imaginations through its use of light and space. The one-of-a-kind installation will weather the elements and take visitors under its wing through Aug. 14. 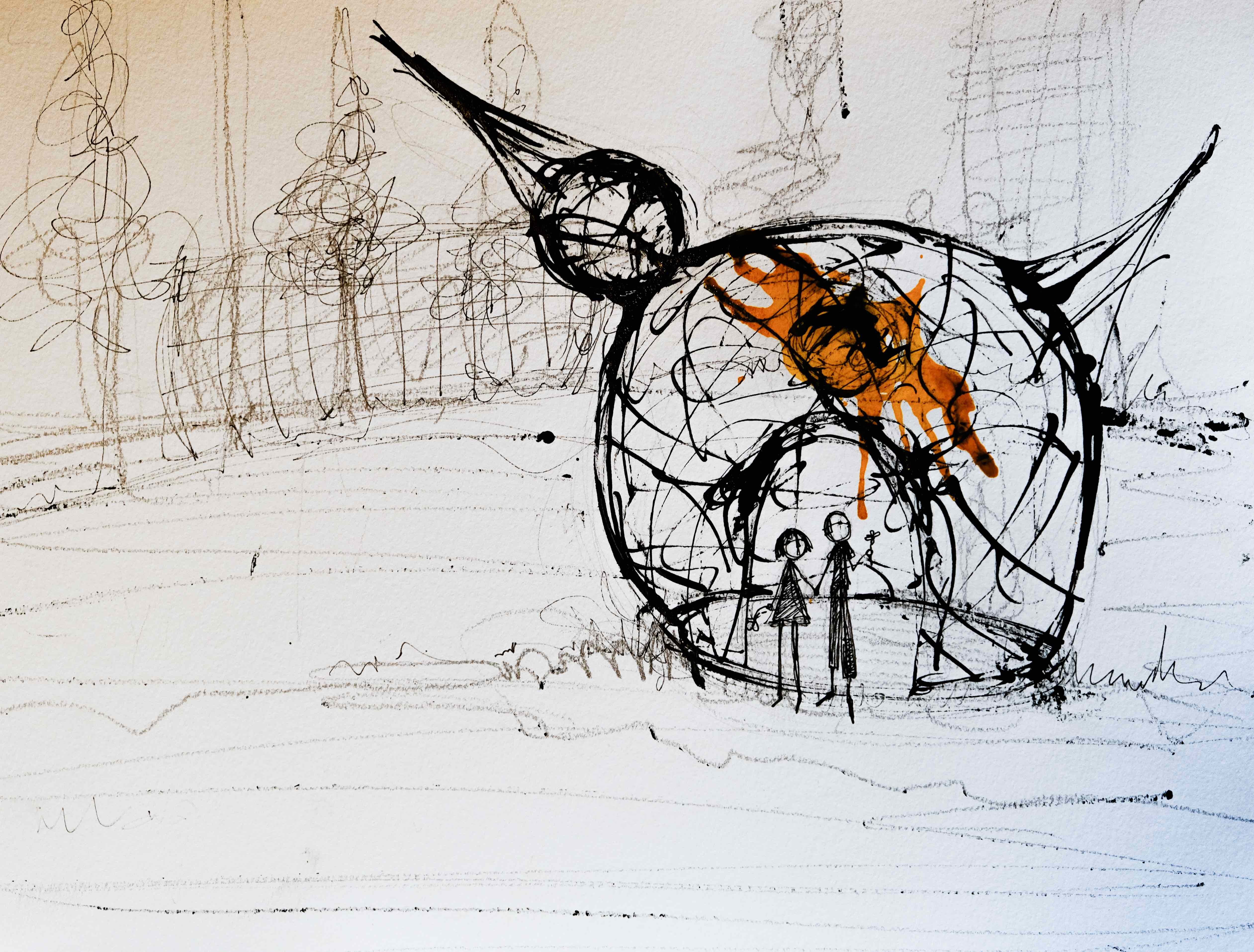 “These little birds have accompanied me through every aspect of life.”

After a stint away from the arts, collaboration was the draw that pulled Gabriel Friedman back. “I really wanted to work with other artists to translate their imagery and their concepts into tangible, three-dimensional pieces,” he said. “I saw Denise’s work and thought it would be great to translate it into a massive world.”

Though a long time coming, the partnership between Duong and Friedman nearly didn’t happen. The two began dating in 2000, before falling out of touch for nearly 17 years. “After just a few days of reconnecting with one another, we decided to collaborate, and we came up with this,” Duong said. “It’s a combination of both of us — perfectly.”

The opportunity to collaborate on a public installation of this scale represented a new phase not just in their relationship to each other, but to the city they call home. Art events were rare in early-2000s Oklahoma City, but Duong and Friedman engaged their DIY spirit to bring creative experiences to the public decades before the phrase “art renaissance” was on the radar of any city official or local reporter.

“There were almost no art spaces. There were no events happening,” Friedman said. “We wanted to have these art shows, and there was no place to do it.” So the pair improvised, throwing guerilla-style art blowouts and pop-up exhibitions for an underserved creative community that was clamoring for them.

“It was natural for us to throw these parties,” Duong said. “Nobody else was going to do it.”

One of the biggest events was a New Year’s Eve art bash in Automobile Alley, held in a parking garage just a few blocks south of the new Oklahoma Contemporary. Twenty years before the area would become a major cultural artery for the city, Duong and Friedman rang in the millennium in an abandoned space with music, food and a major dose of public art.

With The Unexpected Us at Scissortail Park — one of 13 metro sites where people can experience art tied to Oklahoma Contemporary’s inaugural exhibition now through summer — Duong and Friedman find themselves working in tandem with the city’s momentum, rather than blazing a trail outside its institutions.

“Twenty years ago, when somebody was excited about doing something, like having an art show or making art, everyone was very supportive of it,” Friedman said. “But there wasn't a support system. Today there's just more support. There are more avenues, which is great.”

Duong shares her collaborator’s appreciation of these new sources of support for local artists, at a time when inspiration is taking flight across the city. After installing what the artist calls the most physically demanding piece of her career, she’s pausing to take it all in.

“It's exciting to be involved in this epic moment in Oklahoma art history, with Oklahoma Contemporary soon to open this gigantic state-of-the-art facility,” she said. “It means so much to be a part of it.”