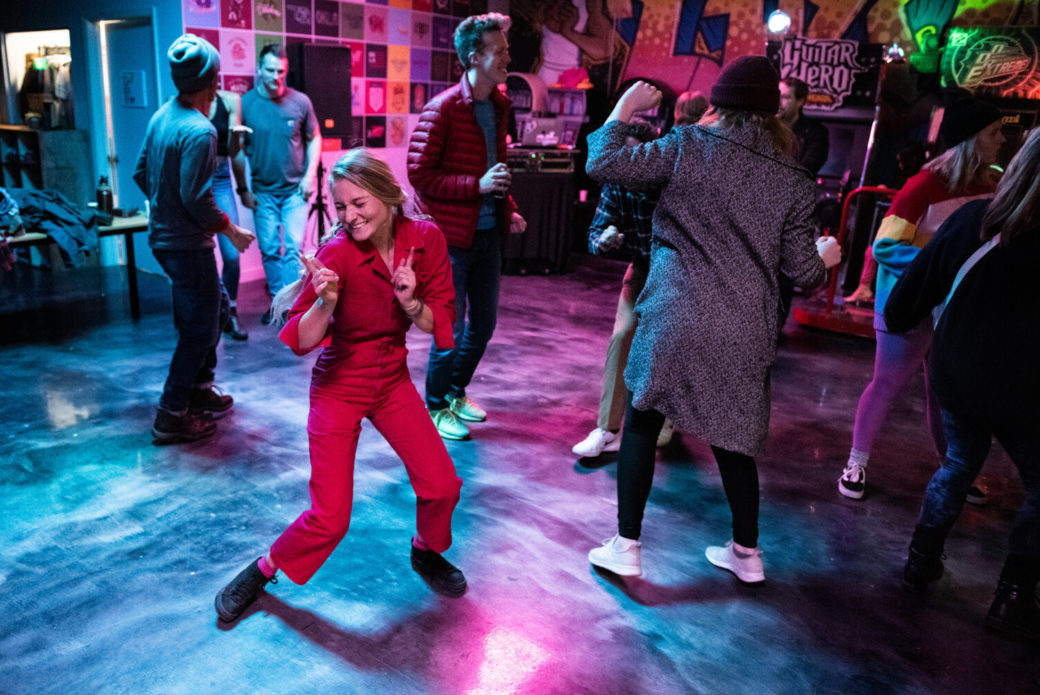 The Studio-in-Place artist on breaking rules and building community 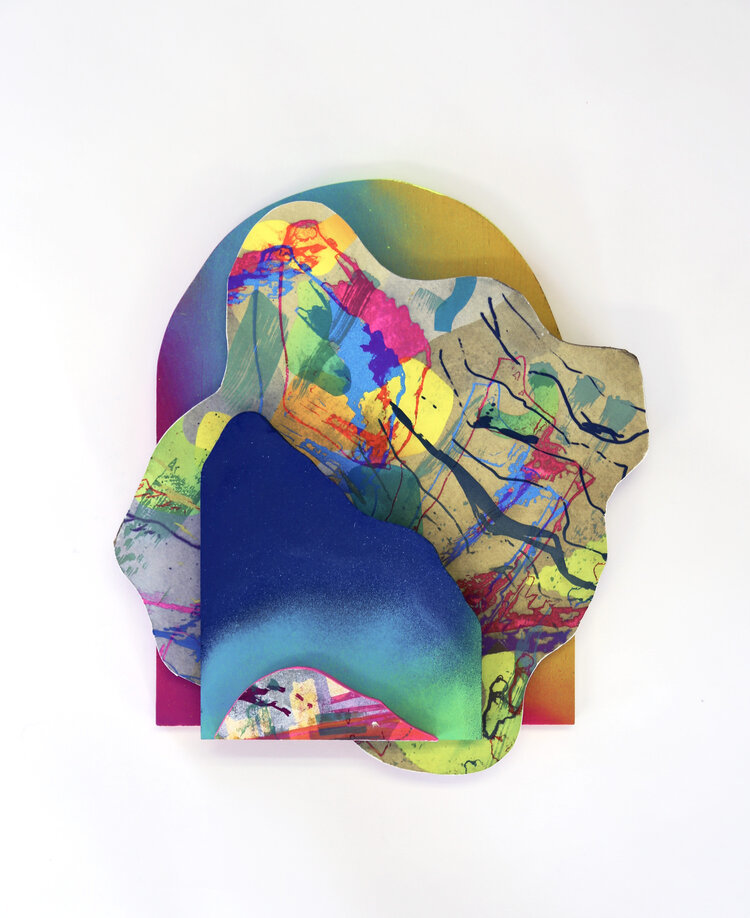 A Spacey Ballad (2020) by Virginia Sitzes

Virginia Sitzes was once a rule follower — then she discovered printmaking. The artist had been struggling in her painting practice to capture the images in her mind, trying to realistically depict the world as it is. "Sometimes it was a good experience, but it was heavily anxiety-inducing," she said. When the final result didn't match the artist's vision, doubt and unease would begin to creep in.

Now, as a printmaker, Sitzes revels in experimentation. The artist begins with a blank slate, gradually and intuitively adding a screenprint, paint and other elements. "I love the risk involved in not knowing how certain elements will respond to each other, and the pleasure in witnessing new colors and shapes emerge," she writes in her artist statement.

For today's #ThursdayThree installment, we talked to Sitzes about her path to printmaking, the value of public art and the inspiration for SHAKEN OUT OF THE SCREEN, her new digital residency project with Oklahoma Contemporary.

You came to printmaking through painting. Can you talk about that journey?

When I first went to school, I was like, "I'm gonna be a painter!" It was going to be my number one. But thankfully they make you take a beginning class in everything. I just totally fell in love in my printmaking class. I was fascinated by so many different processes. But also within each of those, you could experiment and use different processes for one project. And once I got the hang of things, I realized I could go back and break the rules to create something new. That was really cool to me. I was excited by the idea that I could forever be learning about this whole thing. 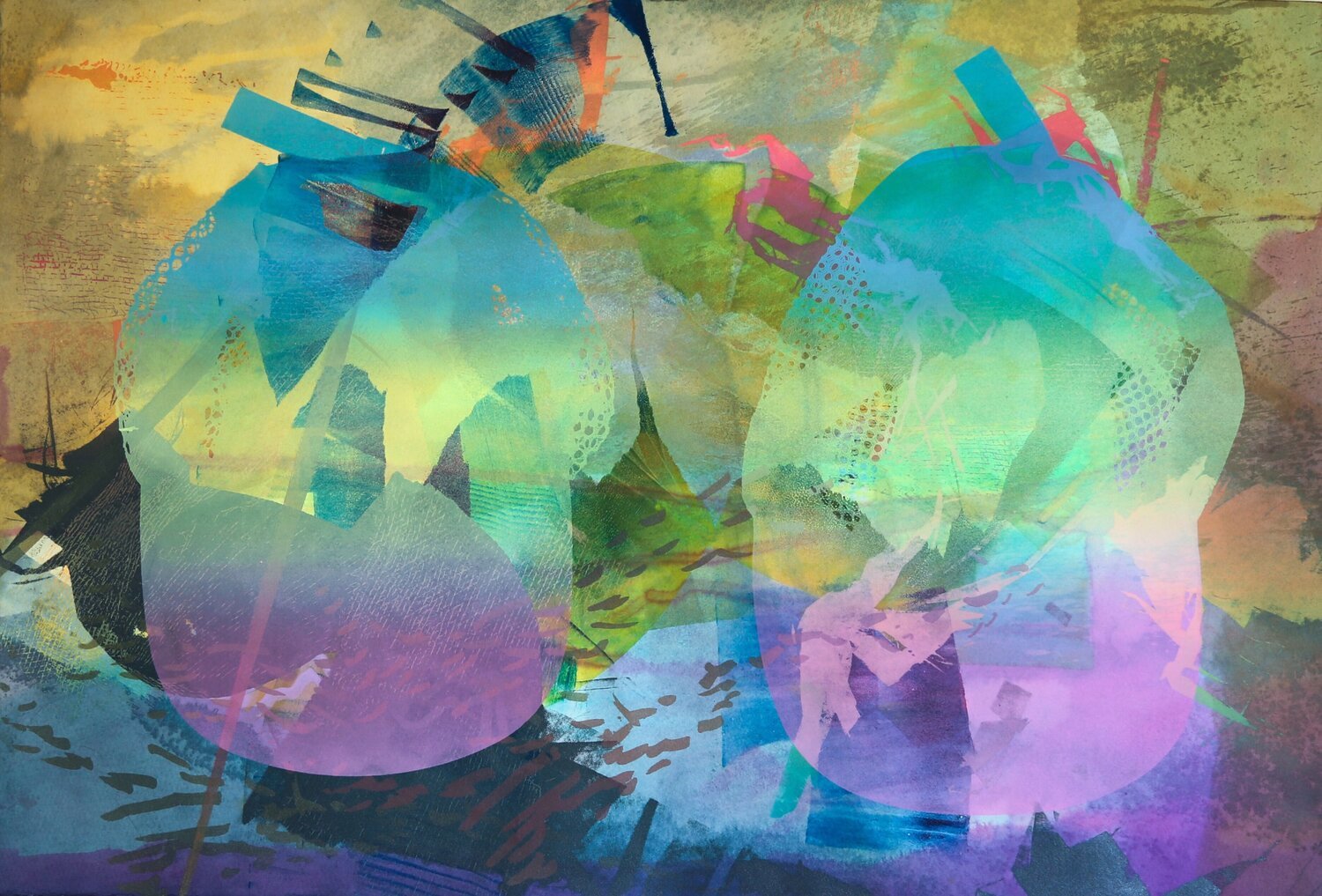 It actually helped a lot with my painting practice. In the beginning, I was doing these super realistic portraits, which is kind of funny now. But printmaking taught me to give myself to the process. I learned a ton that translated to my painting. It really flipped this switch — in a great way. I used to get a lot of anxiety trying to make these things look like a picture or make it perfect. It wasn't what I came to think art should be, in my mind.

So finding printmaking was very freeing. I just kind of went through that honeymoon phase of being in love with printmaking, and it's kind of just stuck around. I can't really stop. And the more you get in it, the more you come to find that the community is pretty tight knit. I know a lot of printmakers from a lot of places. You see these people at the same events, and everyone is just very supportive and welcoming as a whole. And printmaking is an accessible art. It was made for the masses: to make multiples, to get art out there into the hands of people. I think that's really great.

To that point about accessibility, what can you say about your involvement in public art projects like Plaza Walls? What's the value of that kind of work, and how is the process of painting in open air different from creating in the studio?

I got really lucky as far as coming to mural work. I met someone with the Oklahoma Mural Syndicate who recommended me for the Route 66 Mural Fest in Miami. A week before that, I was asked to do a mural on a dumpster for a friend-of-a-friend who started a dumpster company and they wanted to do a series. So I got kind of connected through that. I was thankful to have kind of a smaller but still large-scale thing to kind of test it out on. 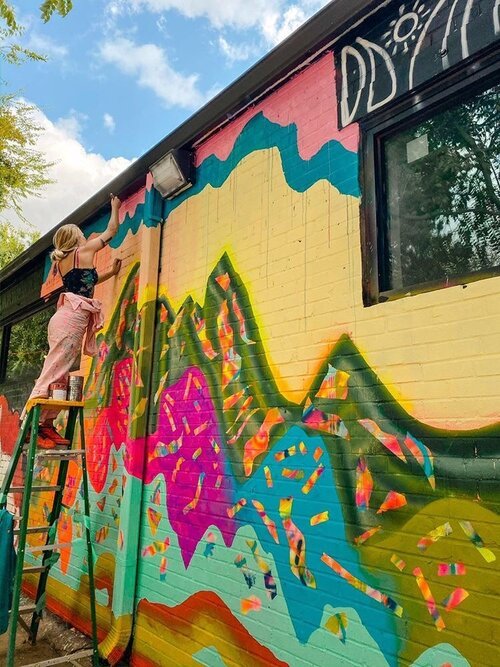 I don't often think about open air versus in the studio. I actually see a lot of similarities with printmaking, which I think is why I love the mural festivals and all of that so much too, because this mural culture is made up of people who belong to this small world where you're going to see the same artists every now and then while you're creating. I've been lucky to do a few festivals now, and it's not just me working on one wall. There's usually a few going on.

So yeah, it's kind of like printmaking, because very few people have their own at-home studio where they're working alone. Currently, a lot of people have kind of had to figure that out during the pandemic, but it's very community based. I find that public art, murals and mural festivals specifically are very much the same in that way: We're all working at the same time, inspiring each other and encouraging each other. It's a really euphoric experience where you come out way more inspired, but also empowered.

What can people expect from your Studio-in-Place project with Oklahoma Contemporary?

It's a way of documenting contemporary art during this state of national unrest. I'm working with visual and written art that people have been generating during this time. I'll be putting the visual art into books, because books have historically documented things. They live on through generations. It's something people can go back to and learn about specific times. 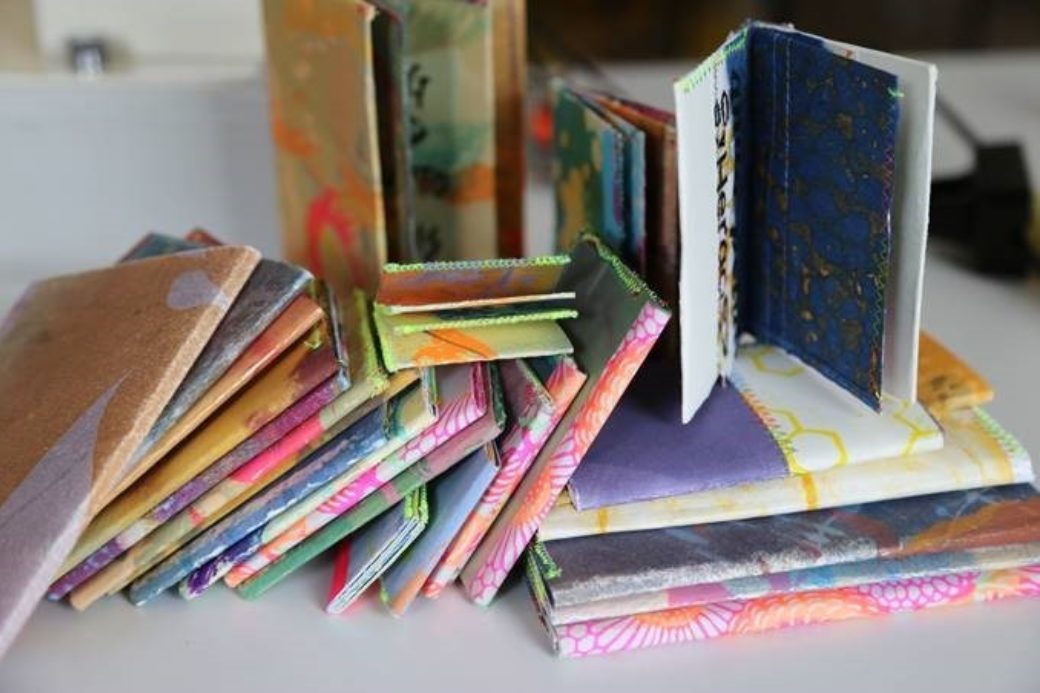 Virginia Sitzes' project, SHAKEN OUT OF THE SCREEN, will result in a mini library of hand-bound collaged art books.

I'm working with poet Lily Greenberg, who will create these master poems by rearranging and reworking these written submissions. So it's a big collaboration as well. I'll make multiple screenprinted editions of those, to spread those around for people to keep and look back on. It's sort of a way to capture the feelings going on at this time and the words people are using to describe things.

In the end, there's going to be a shelf with a bunch of books on it, along with what will look like posters. I'm envisioning them looking like letterpress posters with the poems screenprinted onto them. I really like the idea of of flipping things, so the visual art is in the books and the written art is on the wall. I'm really excited about this project, and I can't wait to see how it comes together.

Virginia Sitzes is a printmaker, painter and muralist living in Oklahoma City. She is a Studio School instructor and has taught various workshops regionally. Her work has been featured in Art Focus magazine, Barnstorm Literary Journal, Oklahoma Gazette, the Tulsa Voice and the Inspiring Conversations OKC and Whatcha Makin’? podcasts. She has been the drawing and painting liaison for Oklahoma Summer Arts Institute at Quartz Mountain and is also a printmaking mentor for Artspace at Untitled's high school mentorship program. Virginia is also an active arts organizer. She co-founded the emerging artist collective, Art Group OKC, in 2017 and is the operations coordinator for the Connect::Collect international print exchange. She has curated various pop-up shows and events in houses, alternative art galleries, and non-traditional venues.