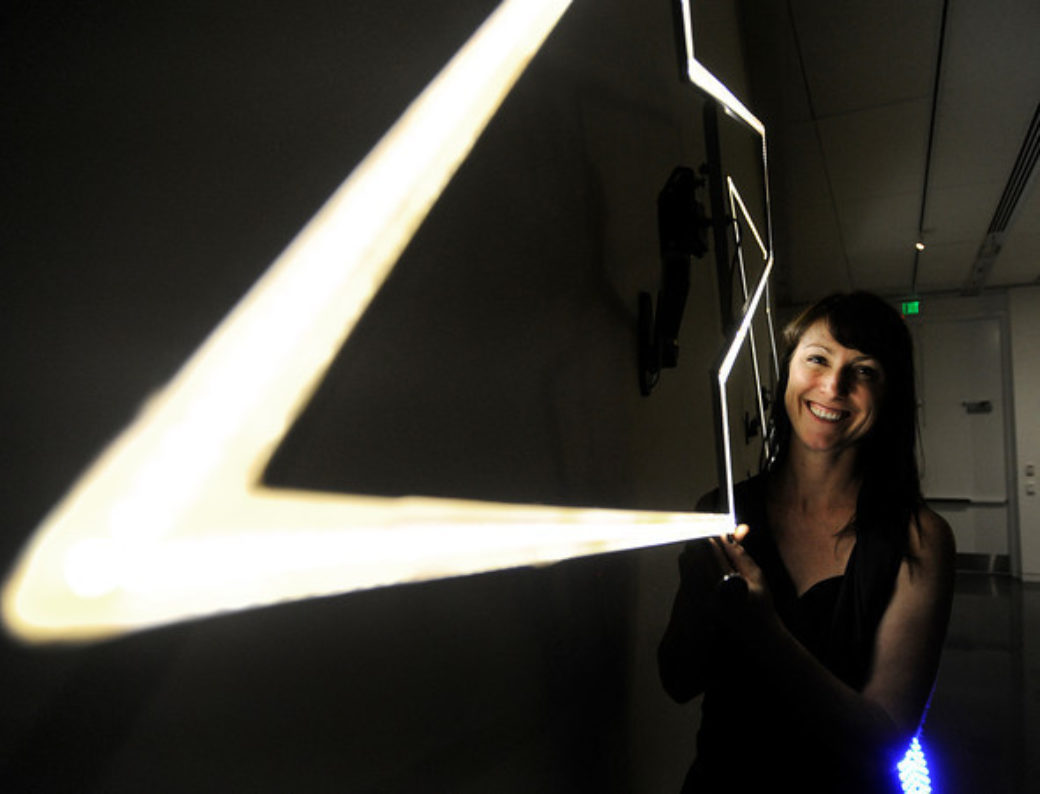 Color and movement are returning to downtown Oklahoma City. Since artist Jen Lewin's interactive light landscape Aqueous opened in Campbell Art Park outside our new home last month, people from all over have come to scamper, dance and play across its spiraling LED surface.

"I wanted to create this environment that inspires the playing of games and inspires people to ... collaborate and participate with others," Lewin told The Oklahoman. "Really, that's the core sentiment for my part, and I'm creating this light environment that can explore that."

Viewers will get a behind-the-scenes look at Lewin's studio space and learn about how she constructs mesmerizing, interactive sculptures like Aqueous tonight during a virtual gallery tour as part of our Thursday Night Late programming. Before you tune in at 7 p.m. on Facebook or here on our website, learn more about Lewin and her practice in today's #ThursdayThree installment. 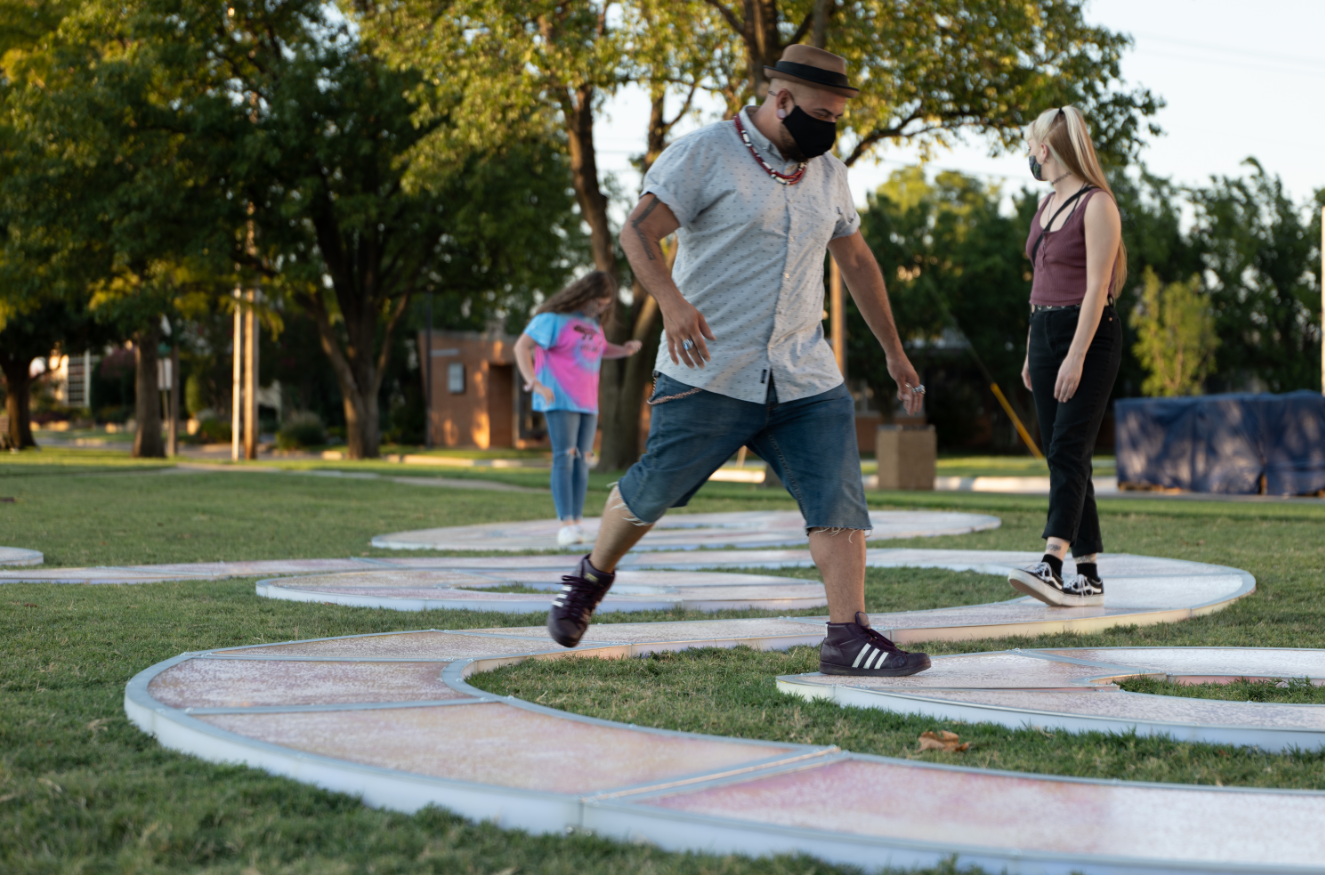 So much of your work is about bringing people together, which seems to make it uniquely vulnerable to COVID-19. How has your practice been impacted by the ongoing pandemic?

I mean, it's definitely been pretty wild. It started out with a big complication. We installed the largest sculpture I've ever made — a 15,000 square-foot sculpture — in the center of Tokyo. I was there for the installation in mid-March, quite literally as New York was basically saying, "We're not going to let anyone back." We have this kind of panic, because the sculpture was being installed, so we actually worked around the clock to finish it. Then we returned to New York to go into full quarantine for two months while the sculpture in Tokyo sat closed.

It's very emotionally strange to work for two years on a piece that big and not have it open to the public. It was devastating, to be honest. But interestingly enough, it opened [in late July]. So now there's this happiness that it's open, but there's also a really complicated emotional feeling about the fact that I'm not there. It feels very distant and detached — which I don't like, because the heart and soul of all this work is really about bringing people together. It's about creating this communal, connected experience. It's about this joyful way that you can come into your community to play and interact with piece of art, and not only just notice the work but also notice that people around you. That's the art. The art is actually the people on the sculpture.

So for that to be the heart and soul of my work, then have it on the other side of the world is very weird to me. For the exhibition in Oklahoma, at least I have Charlie [Lindgren, head of operations for Jen Lewin Studio] there, but it's definitely tough for the rest of my team to be stuck in Brooklyn. 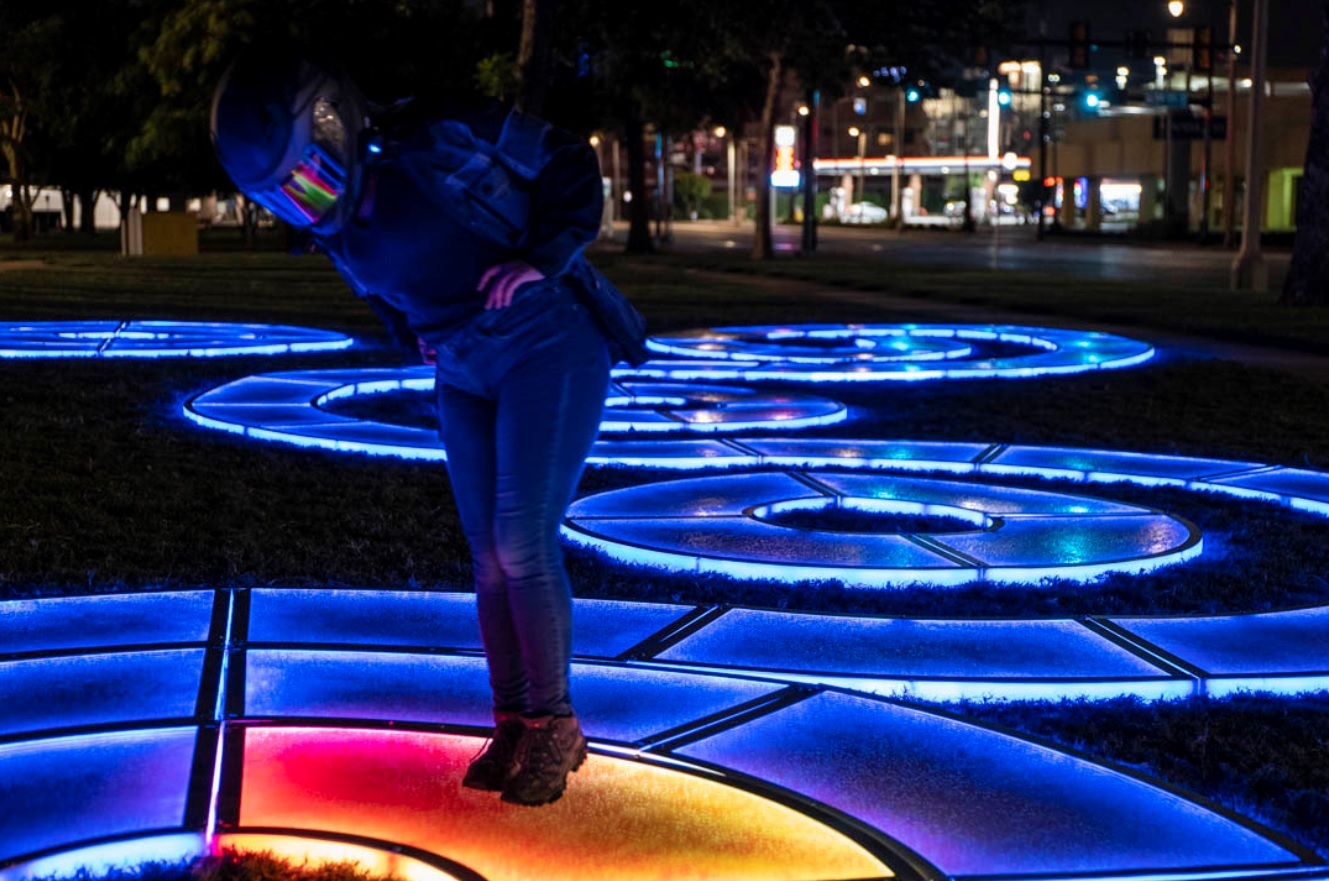 Many readers might not know what a studio team really does. Can you talk about the collaborative aspect of your work, and the installation process for Aqueous in particular?

Originally, I was just on my own. When these sculptures were all made, it was just me. It's all built in-house, which is highly unusual about what I do in interactive art spaces. It's all engineered in-house. I'm not an artist who might sketch out something on a napkin and then go and hire a software team or hire an engineering team. It's actually built in the studio, and the reason for that is that is I love making things. That's why I became an artist. I want my hands on every aspect of making the work.

About eight years ago, I just started imagining these very complicated, large, interactive sculptures that were 100 feet by 100 feet, and making them all by myself wasn't reasonable. And so very slowly and organically, I started putting together a team to help me with production and fabrication. You know, artists all collaborate. They all work in teams, when you're talking about a public artist or anyone who makes large installations. They just typically outsource it. The difference for me is that it's all internal; I don't outsource the work. It's built by me and a team of wonderful people.

The heart and soul of this work is really about bringing people together.

For Aqueous, I sat down with my Brooklyn team, and we looked at what it meant to prep and develop the sculpture. There were a lot of things we could reuse from past versions. There was a lot that needed to be rebuilt. So we started projecting out what it would look like to rebuild Aqueous to come to Oklahoma City. That process was spread out over the course of six months in Brooklyn. There were lots of different groups involved in that. I had some interns last fall that helped out, along with other artists from the community. It was a long building process.

The install itself is a little different each time. In this case, Charlie [Lindgren] is there. He can work with a team of four to six people and usually install in about two days. And honestly, that is a testament to the strong design sentiment that went into that work years ago, to really be able to make a traveling community sculpture. To truly do that, you can't have a two-week install — you've got to have it installed reasonably quickly. And so, so much goes into the prep here ahead of time. 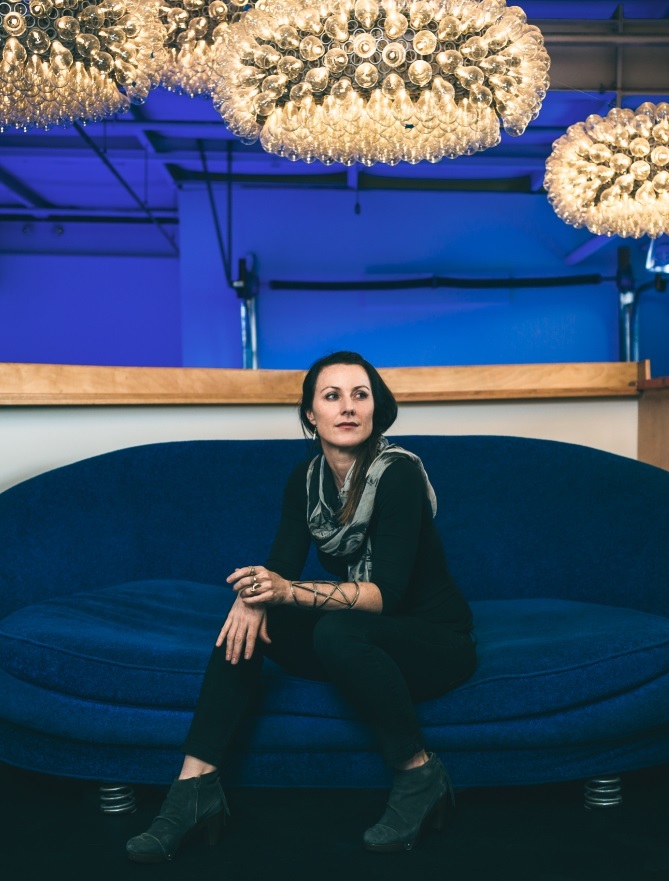 Bright Golden Haze explores the ways artists use light to create a sense of place. Can you talk about Aqueous fits into that conversation?

Yeah, I mean it seems like to me it's quite literally doing that. I'm taking over a whole landscape and creating an illuminated landscape. But the actual nature of illumination is dictated by the participants; that's fundamental. So I compose a base palette of these lights that will be there when no one's on it, but it doesn't come to life with true illumination — or, as you're saying, the true full bright golden haze — until other people are actually in the work.

For me it's really about illuminating this park but then also illuminating the humans in the park. That human element is really the strongest cornerstone of the work. It might be beautiful and curvy and organic, and have some wonderful symmetry and luminescence without humans, but it really only comes to life with humans.

Editor's note: This interview took place on July 29, 2020. It has been edited for length.