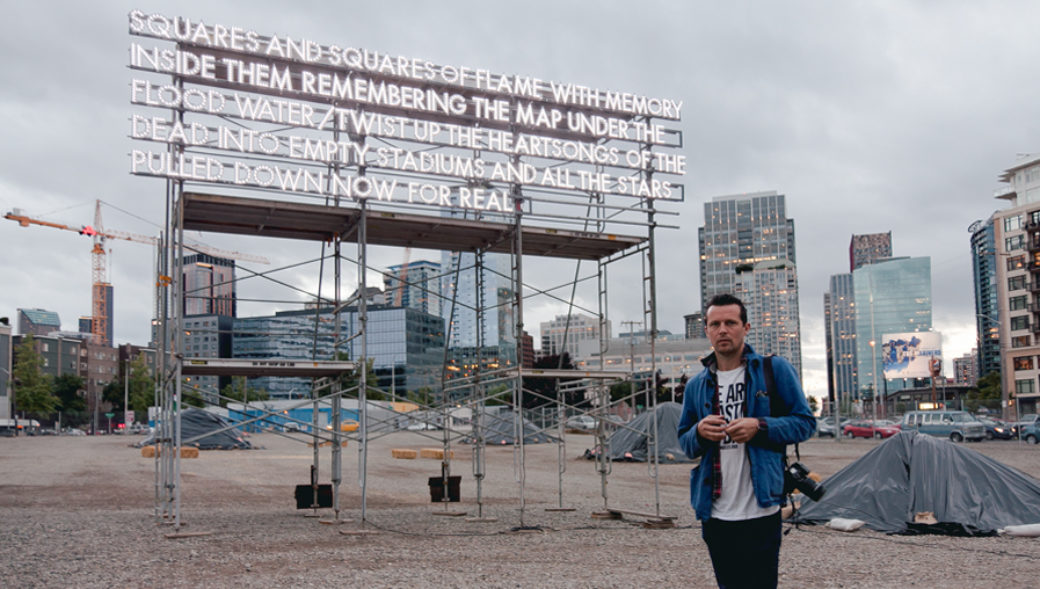 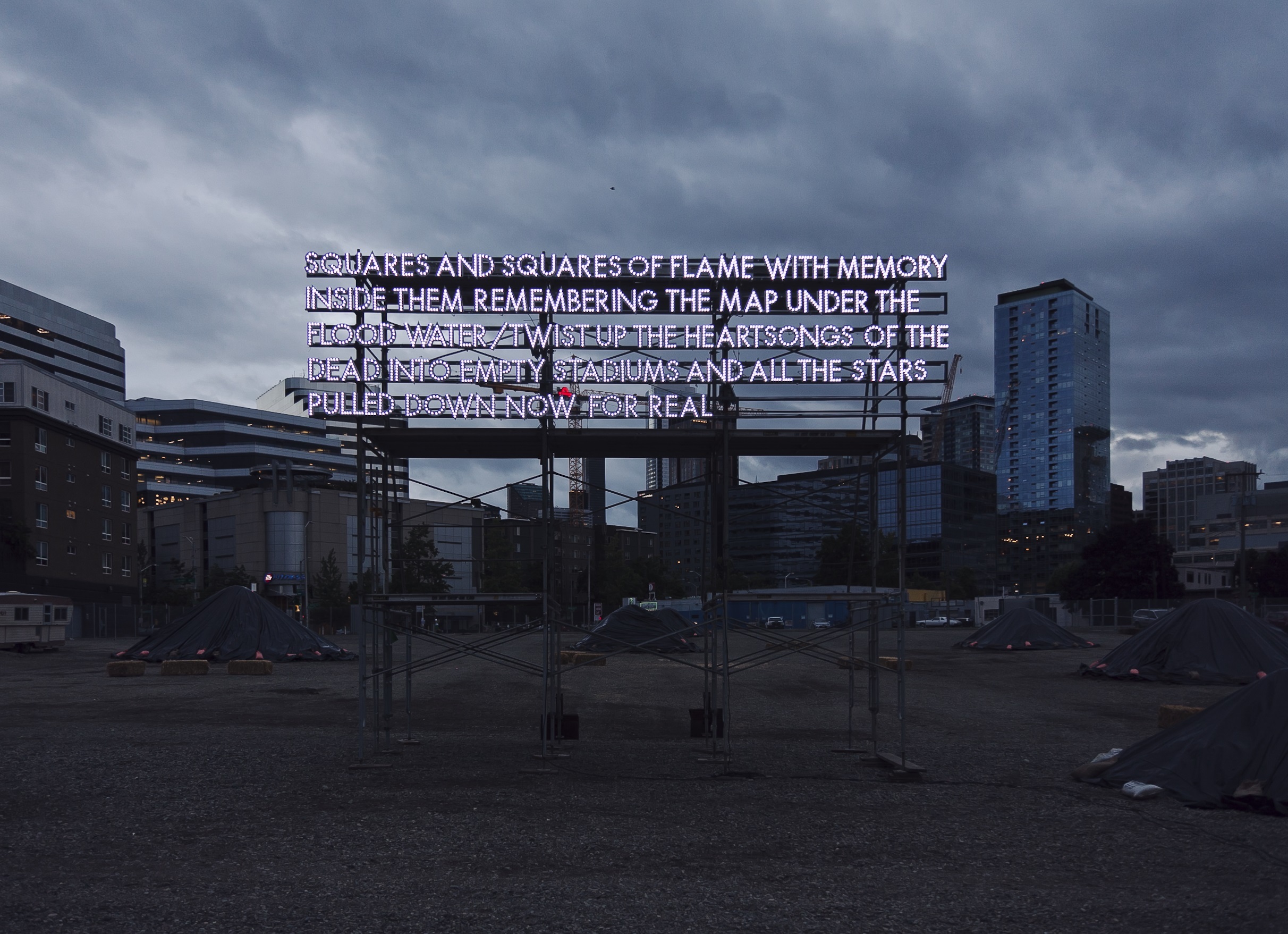 Robert Montgomery's THE STARS PULLED DOWN FOR REAL opens on the North Lawn at Oklahoma Contemporary on Dec. 24.

Visual and literary art collide in the work of Robert Montgomery. Since he first began installing billboards in the Shoreditch district of London's East End in 2004, the artist's text-based work has occupied a unique position at the intersection of conceptual art and poetry. Oklahoma Contemporary visitors will get a chance to experience Montgomery's work in person, when his installation opens on the North Lawn outside your new arts center on Dec. 24.

"I don't necessarily think of myself as a poet, but I certainly think about trying to bring poetry into my practice as an artist by osmosis," Montgomery told Blouin Artinfo. "That kind of voice just bled into my work." 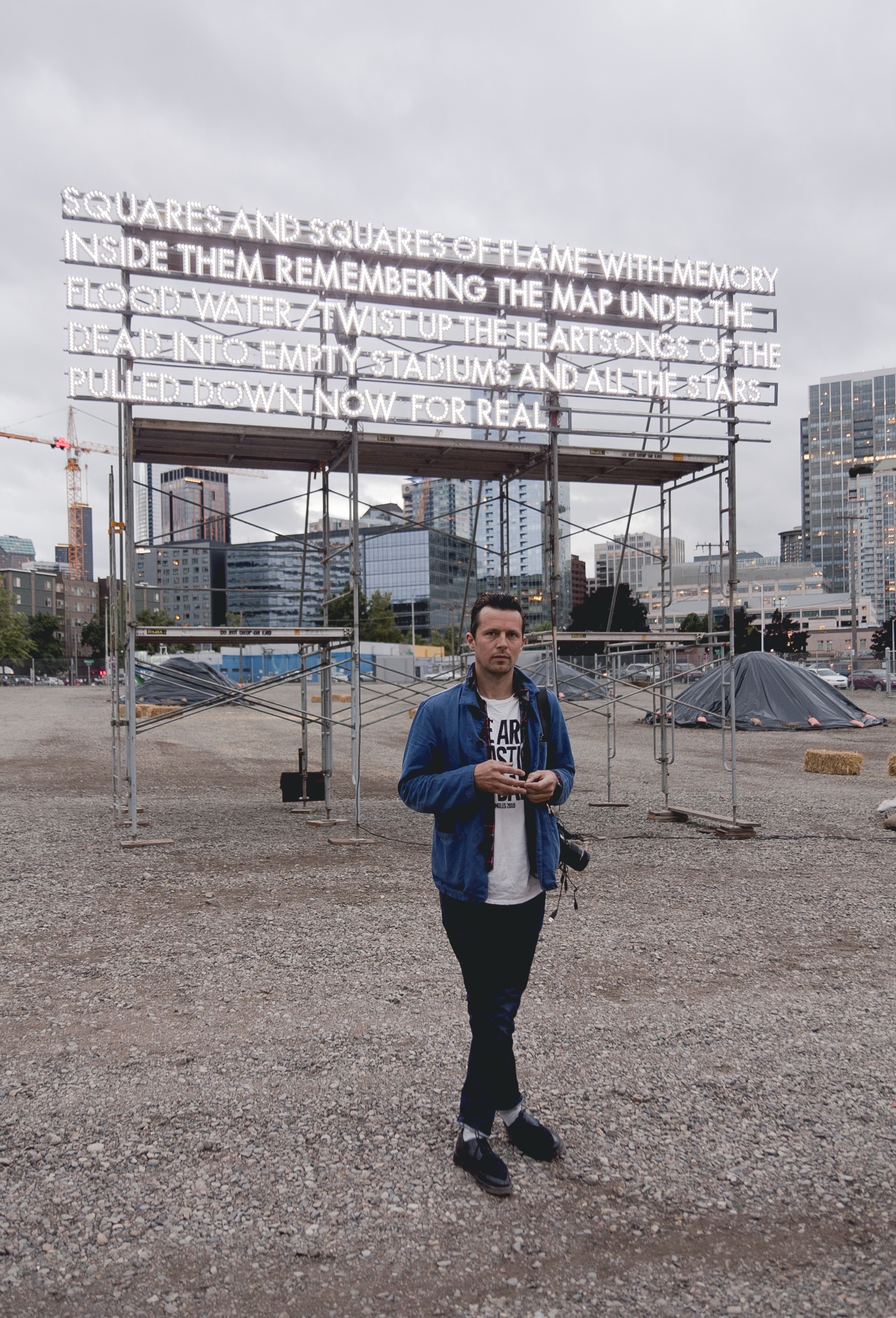 "I’ve definitely wanted to use the techniques and formats of advertising copy, and ask that to deal with poetry," Montgomery told purple ART. "It’s a challenge to constantly modernize the way you go about writing poetry. When I’m writing texts I consciously try to use the way we speak on social media, to use modern, idiomatic shortenings of words. I think you have to deal with the language of your time if you can. Then there’s lots of ironic things in terms of the dissemination of poetry and art on social media."

Referencing poet Ezra Pound’s 1913 essay Patria Mia, celebrating the dazzling lights of New York City, Montgomery’s THE STARS PULLED DOWN FOR REAL casts an elegiac light on the surrounding cityscape. First installed for a commission by ALL RISE in Seattle in 2015, the reading of the text and its commentary on the contemporary city is inflected with new meaning in 2020. Still, the work retains Montgomery's faith in the possibility of transcendence in what the artist calls an exercise “of remembering the magic of a city and trying to uncover that sense of the sacred [in] the every day or a sense of God in the mundane.”

Putting a literal spin on concrete poetry, Montgomery sees city blocks — like Oklahoma Contemporary's own corner of NW 11th and Broadway in downtown OKC — as “concrete poems” with each billboard as a page. With works in private and public collections in China, Germany, Switzerland, the United States and the United Kingdom, the artist's mission to poeticize the cityscape is one that spans the entire globe.

Sharing more than just the form of poetry, Montgomery's work strives for immediacy in forging a connection between reader and text, viewer and object. "The point of making art is to touch the hearts of strangers," he said in an interview with JD Malat Gallery. "That achievement is more important to me than anything else."