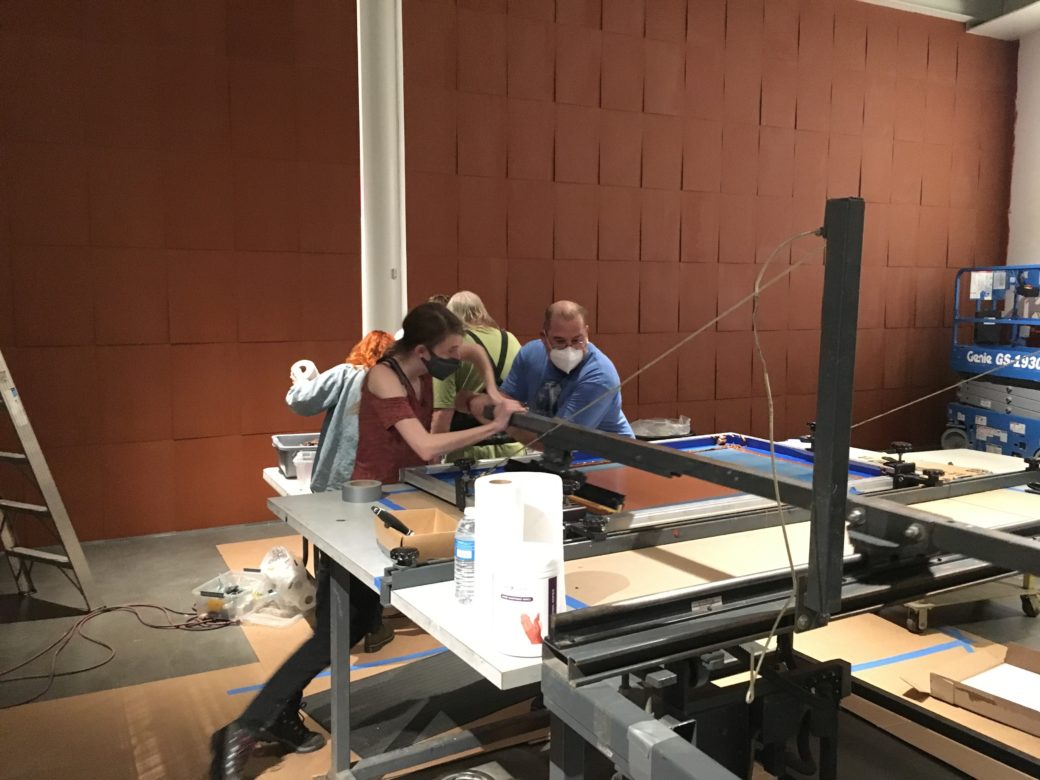 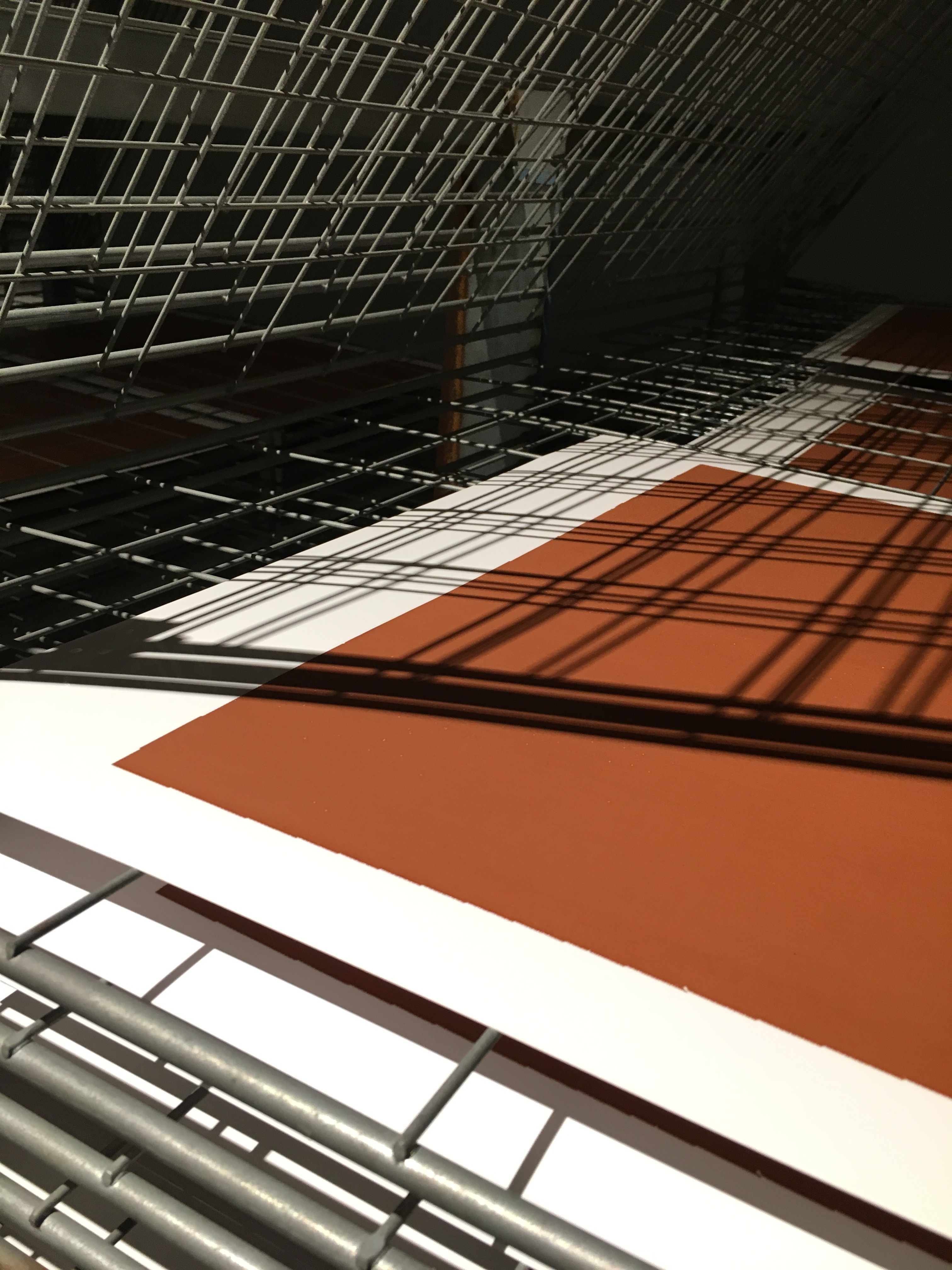 A firsthand account, unwrapping the brilliance of a delicious installation

My experience with Ed Ruscha’s Chocolate Room began with unwrapping around 600 chocolate bars, or the equivalent of 100 pounds of Hershey’s chocolate — and yes, I might have nibbled on a piece or two. My fellow Visitor Experience associate, Araina Leatherock, and I set about opening boxes and wrappers, crumbling the milk chocolate into tubs. As we broke chocolate bars and made Charlie and the Chocolate Factory jokes, the team from La Paloma Fine Arts pieced together the printing press and other equipment they had brought with them from their Los Angeles fabrication lab.

Ron McPherson runs La Paloma with his wife, Edan, and their children, Robin and Daniel, where they work together to craft large-scale metal sculptures and other installations of varying media. Ruscha entrusted the family with producing and installing Chocolate Room many times before, starting in 1995 with the Los Angeles Museum of Contemporary Art’s exhibition 1965-1975: Reconsidering the Object of Art, where the installation was reproduced for the first time since its inception at the Venice Biennale.

During that 35th edition in 1970, many of the American artists set to display work boycotted the show and withdrew to protest the U.S. involvement in Southeast Asia, including Robert Rauschenberg, Andy Warhol, Frank Stella, Claes Oldenburg and Roy Lichtenstein. Of the 47 artists listed in the catalog for the show highlighting lithographic works, only 24 remained. After much personal debate on whether he would choose to participate, Ruscha asked his mother to send a letter stating her approval of his participation. Due to the space freed up by the withdrawal of so many artists, Ruscha was given space to display existing prints, as well as to create something new for the Biennale.

At this point in Ruscha’s career, he was producing prints utilizing organic materials like coffee, caviar and — you guessed it — chocolate. After procuring just about every tube of Nestlé chocolate paste he could get his hands on, Ruscha created 360 prints covered in chocolate and hung them on the walls of his room within the American pavilion. The result was sensational, while it lasted. One can imagine that a room covered in sweetness in Italy during the summer would have a short shelf life. Halfway through the Biennale, the original Chocolate Room was attacked by hungry ants. And it wasn’t just the animals that wanted a taste; human visitors, entranced by the smell of the installation and piqued by curiosity, touched, scratched and licked the walls. (This is why, during our exhibition of the Chocolate Room at Oklahoma Contemporary, our Visitor Experience team members will ask gently but seriously that you refrain from eating the art.) Some even marked the prints with anti-war "scraffiti," which Ruscha allowed uncensored, providing the slate for political expression that non-participation would have precluded.

Flash forward to early 2021, and we are standing in the Eleanor Kirkpatrick Main Gallery, where the 73 other objects in the show were being staged as we prepared to cover the space in chocolate prints. For the next week, the small gallery was transformed into a chocolate workshop — with tables set up with the tubs of broken Hershey bars and two double boilers to melt them down, all adjacent to the offset printing press the La Paloma team had reassembled on site. Using a vacuum connected through the underside of the table to hold the paper in place, the melted chocolate was spread across the silkscreen, then quickly pressed over the surface of the thick, double-sided glossy paper. (See video above.)

Each of us had a task, whether it was stirring the melted chocolate and monitoring the temperature, controlling the vacuum, lifting and raising the screenprinting matrix or running the arm of the press across the length of the large table. It was a dance that the La Paloma team knew well. For several hours, it was a ballet of trading off the fresh paper to be printed, then delicately moving them to await the next production step.

The process of creating the chocolate prints was laborious and sensitive. Working with an organic product like chocolate meant there were extra factors to consider, outside of the typical printing process. Once the melted chocolate was poured onto the screenprinting matrix, it needed to swiftly be applied to the paper and pushed through the silkscreen, otherwise it would cool, harden and clog up the screen. Where you placed your hands and fingertips on the paper was also important. Residual oil from the hands could show up in the final prints, and unintentionally touching the freshly printed chocolate could cause it to melt.

Each rectangle was handled with care as it was released from the press onto nearby racks where nearly 400 prints cooled and rested overnight before they were trimmed and installed. To reproduce the shingled effect inspired by the rooftops of California bungalows, prints were cut to precise measurements. Laser pointers, rulers and several pencil marks later, the grid traversed the three walls of the gallery. Starting from the bottom row and stapling from left to right, each print eventually aligned so that it overlapped the previous one, with corners meeting up and covering up all the white on the paper and the walls.

So why chocolate? There are different ways to interpret Chocolate Room. Was Ed Ruscha tiptoeing around the anti-war and anti-establishment critiques by creating a piece that focuses on the senses instead? Is there something to be said about American consumerism when faced with a room covered ceiling to floor in sugary materials? Is the whole thing a ruse devised by Ruscha to lure the audience to revel in the absurdity? Does Ruscha even like chocolate that much?

To echo the words of Gene Wilder as the titular character from Willy Wonka and the Chocolate Factory, “A little nonsense now and then is relished by the wisest men.”

If you haven't yet seen Chocolate Room in person, you have a few days left to do so. Grab your tickets here before OKLA closes July 5.