A whole host of reasons to get your kicks with Ed Ruscha: OKLA before it comes off the walls July 5

Since long before Ed Ruscha: OKLA opened Feb. 18, we at Oklahoma Contemporary have been living, breathing and dreaming Ruscha, the Oklahoma City-raised King of California Cool who became one of the most exciting pop artists of the 20th century. The second exhibition in our Main Gallery, Ed Ruscha: OKLA is a monumental, landmark show, and we are having a hard time saying our goodbyes.

So, with just a few days to go before Ed Ruscha: OKLA closes July 5, Oklahoma Contemporary staff are playing favorites. We asked our crew to write about favorite pieces, themes and ideas from OKLA, so what follows is an entirely subjective, opinion-rich list of must-see works. Time is of essence, so let us help you out with recommendations for your last-minute visit to Ed Ruscha: OKLA. 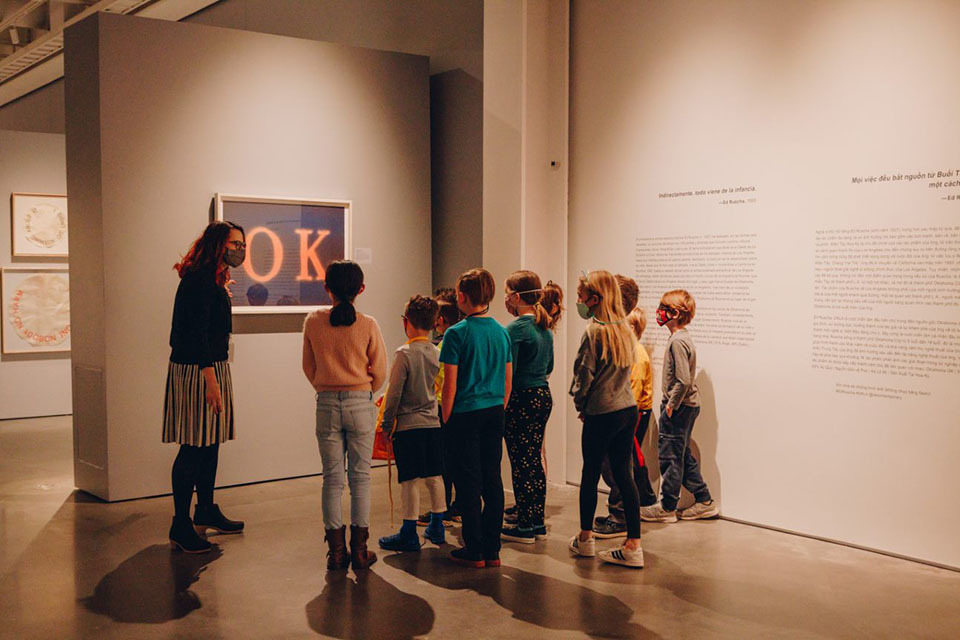 OK (State I)
"Although this piece might seem inconsequential at first, it is my favorite. We start each tour with OK (State I) and have visitors discuss with us how this work is an example of Ed Ruscha’s roots here in Oklahoma. As a newcomer to the state, these discussions have helped me understand and conceptualize my new home." – Jaime Thompson, director of education and public programs

Our Flag/Mother’s Boys
"Each of these paintings of the American flag occupies a different time and mood for the nation. While Mother’s Boys (1987) debuted at a time when details of the Iran-Contra Affair were coming to light, Americans were still largely unified in their views of government and the state of the country. Four decades later, in the piece commissioned by entertainment executive Jimmy Iovine titled Our Flag (2017), another American flag from a different time is shredded and tattered, depicting the disunity and political upheaval of the late-2010s." – George Lang, content creator and editor

Artist Talk
Ed Ruscha himself will tell you why to visit. In this June Artist Talk, Ruscha and co-curators Alexandra Schwartz and Jeremiah Matthew Davis cover a little of everything – history, humor and more. Post up on your couch to delve into the exhibition pre-visit, accent the trip you’ve already made or console yourself if you can’t see it in person. 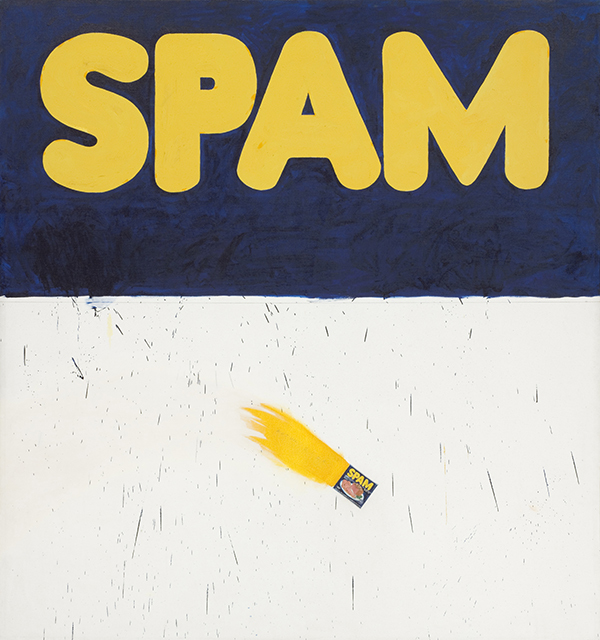 Spam Study
Putting Spam Study – a literal painting of a can of Spam made while conceiving 1962’s Actual Size – in context makes the whimsical work even better. In the final work, the word “Spam” is rendered in the brand’s rounded yellow typeface. Below it, a tiny, exquisitely rendered Spam can shoots through space. Ruscha monumentalizes the notorious canned meat, produced for wartime rations and widely marketed post war, while referencing the Cold War “space race” that dominated the 1960s.

Artist’s Books
"It’s hard to choose a favorite in Ed Ruscha: OKLA, but I do enjoy showing visitors Ruscha’s books. The idea that a mass-produced book can be art often intrigues visitors, but I love the giggles I get when I explain that they are looking at photographic evidence of the artist and his friend throwing a typewriter out of a car. That humorous and seemingly nonsensical act of rebellion really resonates with folks." – Jaime Thompson, director of education and public programs

Route 66
Route 66 is not merely a song or a state of mind for Ruscha. He drove “the mother road” when he and guitarist friend Mason Williams (Classical Gas) lit out for California, where Ruscha attended what would become California Institute of the Arts, and Route 66 iconography expresses both Ruscha’s childhood in petroleum-rich Oklahoma and his adult life amid California car culture. An entire section of OKLA explores this theme, with works from the iconic Mocha Standard to the clever Well, Well.

Learning Gallery
"I absolutely love walking through the Learning Gallery and seeing all of the graphic design-inspired creations by Oklahoma Contemporary visitors. Every day there are new works decorating the space – there is always something interesting to see!" – Marie Butterline, design and marketing manager 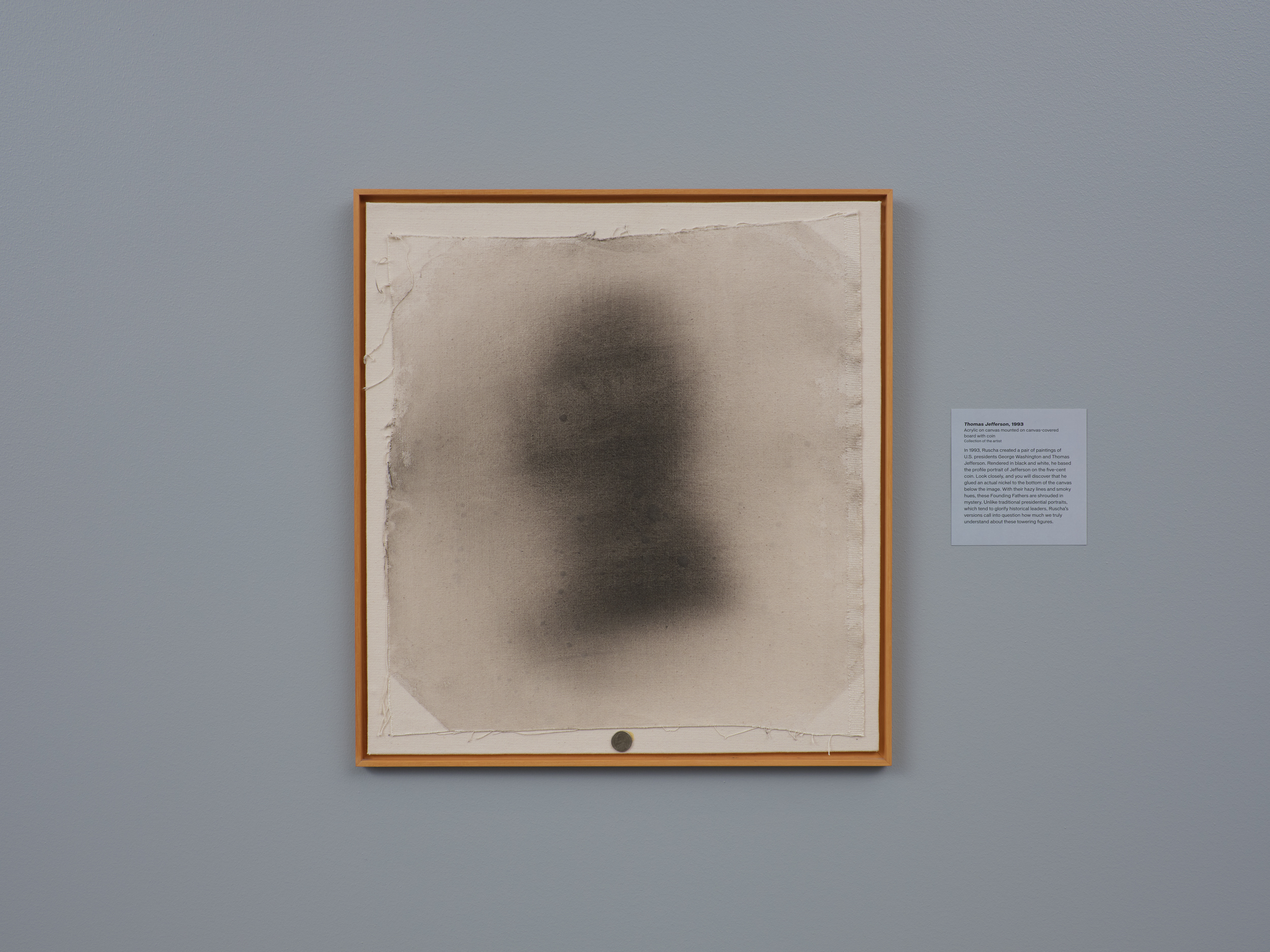 Thomas Jefferson
"I love many of them, but I decided on Thomas Jefferson. I like how it’s fuzzy, like our understanding of who the founding fathers really were. It’s like a visual representation of their intentions. So much 'gray area.'" – Tara Heitz, development officer

Drum Skins
Incorporating colloquial speech and double-negative phrases with elliptical meanings like I Didn't Do Nothing About It (2018) or He Up and Went Downtown (2018), Ruscha evokes the style of speaking he heard while growing up in Oklahoma. Native speakers of Oklahoma English will likely find much comfort in the language, persistent as a drum beat.

Library
Ed Ruscha found the world of art through the world of books. He credits the Oklahoma City Library with helping him discover his artistic calling and his desire to explore the world. When you view the lithograph Library (1995), it may initially feel like an anonymous municipal building. Knowing his connection to the institution changes that.

Comics
Comics (1961) draws not only from Ruscha's time delivering copies of The Oklahoman, but from his experiences visiting the capitals of European art in July 1961. The piece is a four-panel collage incorporating comic strips from Parisian newspapers and his own humorous sketches. 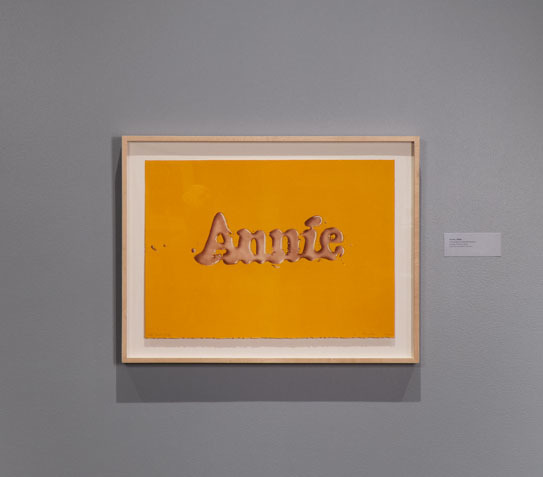 Graphic design
"OKLA is can’t miss for anyone interested in graphic design, advertising or marketing – or the flip side of those, when and how they become something more esoteric. From playfully re-creating logos (20th Century Fox, Annie and so many iterations of Standard gas stations) to a marriage of image, letters and language that has become his own brand (and literally, his own font), there are surprises around every corner. Does that canvas actually curve? Are those car emblems drawn by hand? How does that type change at a distance? The biggest question may be: Where are the lines drawn between commerce and art? Or do they exist at all? Visit in person before July 5 to decide for yourself." – Lori Brooks, director of communications

Miracle
"My favorite piece seems to change every week, but recently I’ve really come to appreciate Miracle (1999). I think it took me the longest out of all of the pieces to fully appreciate, but the message I got from it was a powerful one." – Duncan Payne, Visitor Experience associate

Ghost Station
"Wow, it is so difficult to select a 'favorite' piece from the Ed Ruscha: OKLA exhibition! There are so many great pieces and from such varied mediums. I think, if I must choose, my favorite piece is Ghost Station (2011), which appears to be embossed on paper, although I am not 100 percent sure that is the technique Ruscha used. There is something so impressive, creative, unique and precise about this work. The time and skill it must have taken to create a seemingly perfect embossed gas station, with seemingly perfect two-point perspective, is awe-inspiring to me. I could examine this work for hours and still want to study it more the following day." – Katie Long, events manager

Chocolate Room
Originally created for the 35th Venice Biennale, Ruscha was inspired by free space and extra time to create 360 chocolate “shingles” by silkscreening liquid chocolate onto large sheets of paper. While the original Chocolate Room (1970) was made with Italian favorite Nestlé, subsequent installations, including this one, were created using melted Hershey’s chocolate.

Dorothy Ruscha and Lady With a Spreader
"The pieces I find most interesting inside Ed Ruscha: OKLA deviate from his classic 'wordplay': Dorothy Ruscha (1960), a sweet woodblock homage to Ruscha’s mother, and Lady With a Spreader (1997). The latter exemplifies Ruscha’s expert skill as he depicts a woman, possibly a famous starlet, using only black dots and lines against a muted yellow background divided by an easily mistaken-for-real wood spreader." – Vikki Penix, communications associate and board liaison 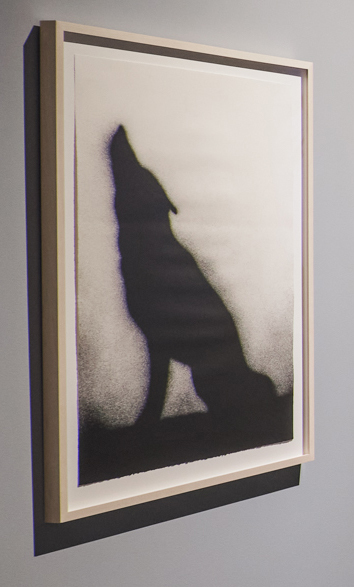 Coyote
"My favorite piece in the exhibition is Coyote (1989). It's a striking depiction, but I also love it for autobiographical reasons. During quarantine, people would ask what it was like with a 3-year-old in the house. I would say 'pretend you caught a wild coyote in your backyard and then tried to keep him in doors for 10 months.' I was grateful for the opportunity to introduce the Coyote to Coyote." – Dan O’Donoghue, associate director of development

Video tour
From your patriotic grandad to your smart-aleck niece, the 74 works in OKLA offer something to please everyone. Need to convince them to join you in advance? This video tour gives you some idea of what to expect in the gallery.

Oklahoma-E
As a child, Ruscha threw copies of The Oklahoman onto neighbors’ porches, and the imagery from that newspaper – including the all-important comics pages that entranced Oklahoma City kids on Sunday mornings – figures prominently in Oklahoma-E (1962). The “E” itself might stand for “Ed,” who still carries memories of all those early mornings and rolled-up newspapers.

Twentysix Gasoline Stations
"If Route 66 connects the place Ed Ruscha left — Oklahoma City — with the place he adopted as his home as an adult — Los Angeles, Twentysix Gasoline Stations (1963) is the artist’s book that marks the spots for Ruscha’s stops along the way during trips taken between the two cities in 1962. Ruscha had already been producing word paintings, e.g., HONK, ACE, ICE, RADIO and BOSS, some of which would also be painted on the sides of the canvases so that the sides looked like book spines featuring book titles. He said, 'In an odd way, it was like a book, and so my paintings were book covers in a way. That’s it, I do book covers …' The artist who was so in love with words that he began to paint them would publish artist’s books with barely any words in them. The only text in Twentysix Gasoline Stations would be the names of the gas stations and their location." – Carina Evangelista, director of curatorial affairs

Only a handful of days of Ed Ruscha: OKLA remain! We're staying open through the holiday weekend – grab your FREE tickets here to see it before July 5.