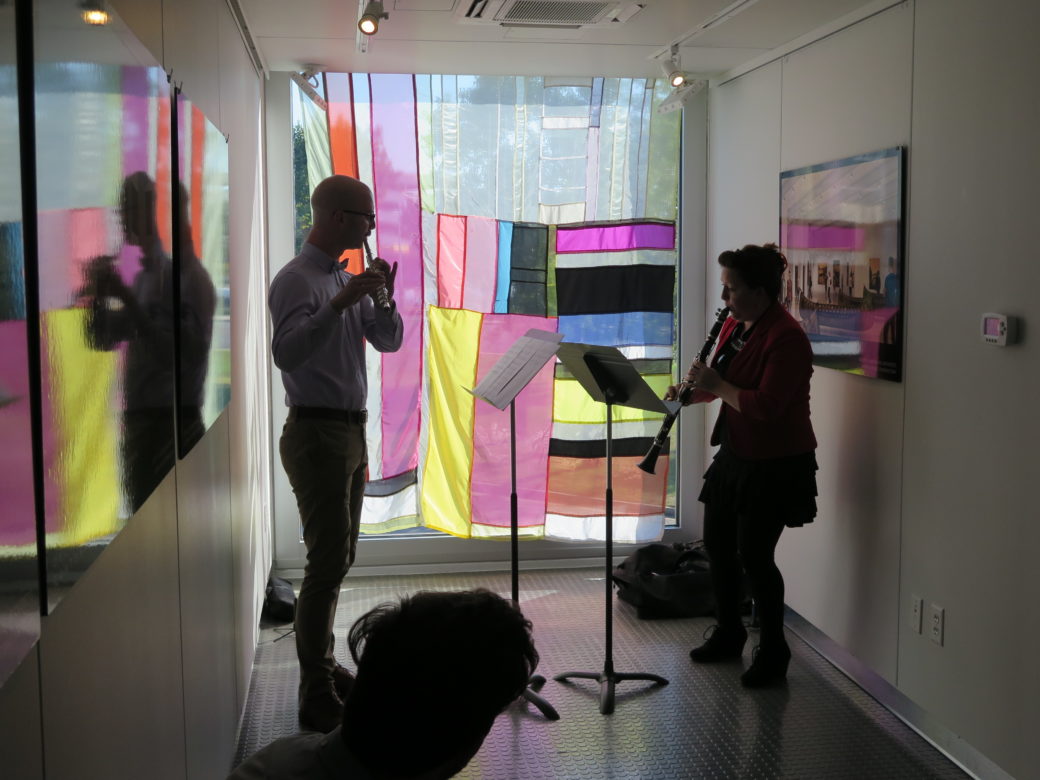 Share at the Showroom was a monthly event that started in 2016 and featured discussions on culture and art with creators from various backgrounds in Oklahoma. Photographers, clothing designers, coffee roasters, chefs, composers, and more were among those featured. Each discussion was paired with a performance by an Oklahoma musician or poet. The event was usually held at our Showroom location, on the site of our new arts campus at NW 11th and Broadway.

Scroll down for a full list that includes details on each past event.

Jordan Vinyard, multidisciplinary artist and assistant professor of art at the University of Science and Arts of Oklahoma, discussed her artistic practice and the themes within her work, which often center on the idea of absurdity being a driving force of life.

Nick Poss, composer, sound designer and educator, presented a series of audio clips from scores he’s worked on for various films, including You People, deadCenter’s Best Oklahoma Film of 2018.

Marilyn Artus led a discussion on protest art and how creatives can use art as activism. She shared about the inspiration and creative process behind a series of works that are part of a project titled, The Flag. Works within this project are those which find Artus, "...using the American flag and all its preexisting meanings as a vehicle for exploration of the feminine."

Designer and motion graphics creator Justen Renyer stopped by to describe his creative process and the insight he's gained as an assistant professor at OSU.

Before the discussion, dream pop band Swim Fan performed a stripped-down set of their original songs.

Oklahoma City based artist Tiffany McKnight discussed her creative practice, which includes pattern making and illustration that is inspired by African textiles, Art Nouveau, biology, and natural flora and fauna. Tiffany is the author of the coloring book, NUVEAU: The Future of Patterns, and is a contributing artist to the Oklahoma City art collective, Factory Obscura.

A reading from poet Najah-Amatullah took place before the discussion.

Artists featured in the third installment of the outdoor sculpture park discussed their work and the inspiration that spawned it.

Inside the Showroom, multi-instrumentalist and loop-based songwriter Jarvix performed a set of his original music.

Dustin Ragland, Oklahoma City musician, producer, and educator, discussed the world of music software and its impact on the contemporary music industry. Ragland is a faculty member at ACM@UCO, and is one of only 200 certified Abelton trainers worldwide.

Oklahoma City-based artists Katie Rake and Elijah Scott discussed what they call, “a collaborative effort of creepy creations”. As the Holey Kids, Rake and Scott are typically masked when presenting or performing their work in public, adding an enigmatic allure to the art they create.

Tulsa-based artists Grace Grothaus and Rena Detrixhe discussed their multi-sensory installation, Wake. Designed and crafted specifically for The Showroom, Wake was an immersive experience about water and its presence in our lives, in Oklahoma, and on the planet.

In addition, the two artists invited guitarist Ruben Leal to perform an improvisational set that interacted with the installation.

This special edition event took place inside Oklahoma Contemporary’s performing arts theatre. Emmy Award-winning hip-hop artist Jabee discussed the legacy he is building in the Oklahoma music scene and how he’s taken his career far beyond the bounds of just music.

Rapper and producer WoRm performed a short set of his original music before the discussion.

To kick off the 2018 season of Share at the Showroom, collage artist Marissa Raglin - who at the time was an Artist in Residence at the Skirvin Hilton Hotel - came by to discuss her artistic practice and her experience as an artist in residence.

Coffee roasters and shop owners Paul Zimmerman (Leaf+Bean, Gambit Coffee) and Steve Willingham (Clarity, KLLR Coffee) discussed how coffee gets in the cup - from the harvest of the bean to the pull of the espresso shot - and shared where they each think the coffee industry is headed.

Cameron Neal, lead singer for the band Horse Thief, performed an acoustic set of original songs before the discussion.

Artist and entrepreneur Jerrod Smith discussed his creative journey, which has led him from being a full-time artist and founder of an artist collective to owning and operating Weldon Jack, a provisions and barbershop in Oklahoma City.

Before the discussion, Gall performed a set of their keyboard and drum machine-based melancholy pop music.

Artists from the second installment of the outdoor sculpture park discussed their work and the processes behind it.

Colin Stringer, chef and co-founder of the multi-course tasting menu restaurant concept Nonesuch, discussed his history with food and how he and a few others took an ambitious dining concept from living room to brick-and-mortar.

Cruise Berry, composer and baker, presented a piece of music written specifically for the event and performed by two flautists.

Co-founders of the boutique effects pedal company Old Blood Noise Endeavors stopped by to demonstrate a few of their handmade models, and then discussed the history of their business.

Sarah Nsikak, clothing designer and creator of Stone+Harper, discussed her personal brand and beliefs about ethical and sustainable fashion, and how these convictions led her to start making her own clothing pieces.

Before the discussion, singer-songwriter Jose Hernandez performed an acoustic set of his original music.

Canvas painter and interior designer Ashely Whiteside discussed the collaborative work she does with her then four-year-old daughter Nora, which has led to gallery shows and blog features.

Before the discussion, singer-songwriter Kinsey Charles performed an acoustic set of her original music.

Photographer Josh Welch discussed what captures his eye, and how he went from attorney to artist.

Artists from the inaugural installment of the outdoor sculpture park discussed their work and the processes behind it.