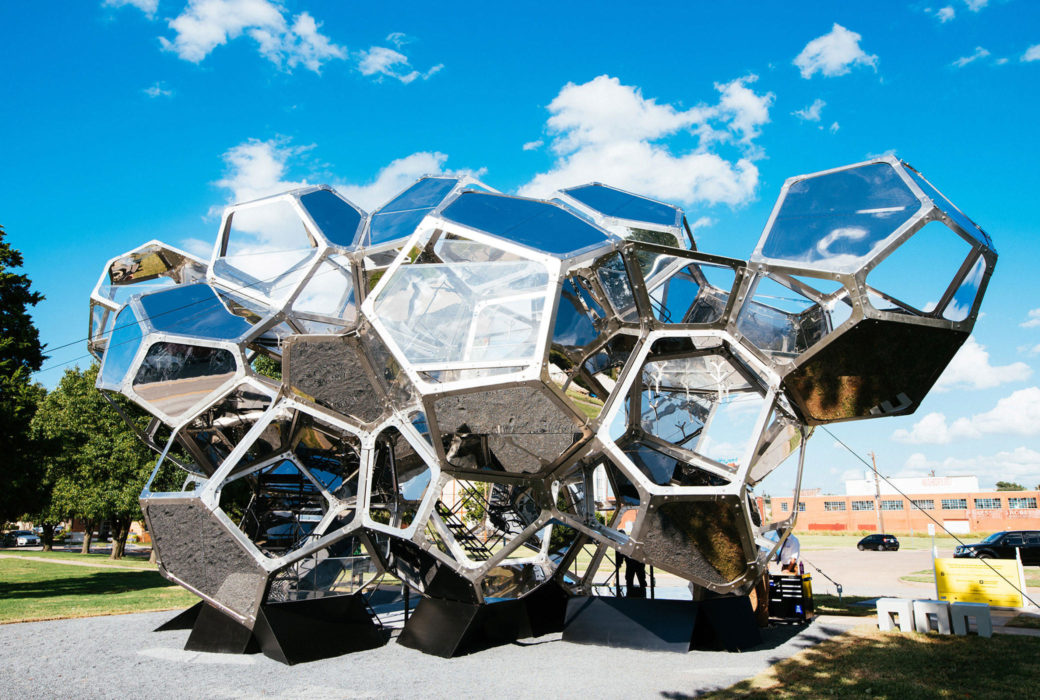 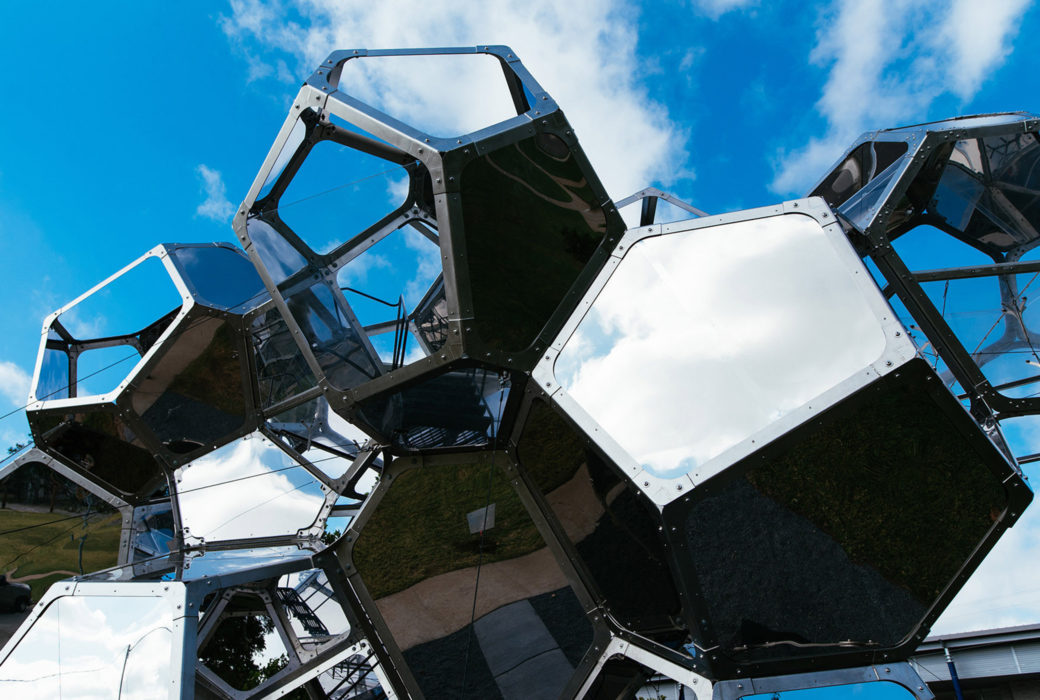 Cloud City was loaned through and with the generous support of the Christian Keesee Charitable Trust.

Oklahoma Contemporary Arts Center reflected, refracted and rearranged the skyline of downtown Oklahoma City the fall of 2016 with Tomás Saraceno’s Cloud City. The large-scale art installation opened Sept. 8, 2016 at Campbell Art Park, adjacent to the site of our planned art campus at NW 11th and Broadway. At the groundbreaking of the new center, Founder and President Chris Keesee announced an extension of the installation. Support and interest have been extraordinary, so the sculpture stayed in OKC through Oct. 30, 2016.

Visitors to Cloud City walked inside what Saraceno calls “a utopian city in the sky.” Made of steel and acrylic, the structure is both transparent and reflective, so that grass appeared overhead and the sky reflected onto the ground. The 16 interconnected modules – each the size of a small room – drew shapes from natural forms, including bubbles, clouds, universes, bacteria, foam and animals’ neural communication networks.

Previously shown on the rooftop of New York’s Metropolitan Museum of Art and at the Green Box Arts Festival in Green Mountain Falls, Colo., the 28-foot-tall installation in Campbell Art Park reflected and reimagined the downtown Oklahoma City cityscape and our state’s unending sky. Saraceno notes: “When it is reassembled in a different place, the sky and the environment will be different; it will change completely.” The change it brought to downtown was breathtaking.

The sculpture showed how Saraceno, who studied art and architecture in his native Argentina and in Frankfurt, Germany, blends them with science and engineering. Instead of designing buildings, the artist has developed a series of projects that present alternative ways of perceiving reality and interacting with others.

Visitors were welcome to enjoy Cloud City from ground level 24 hours a day with the interior of the sculpture open for exploration Thursday and Friday evenings and Saturday and Sunday afternoons. As with all exhibitions at our fairgrounds location, admission was free. 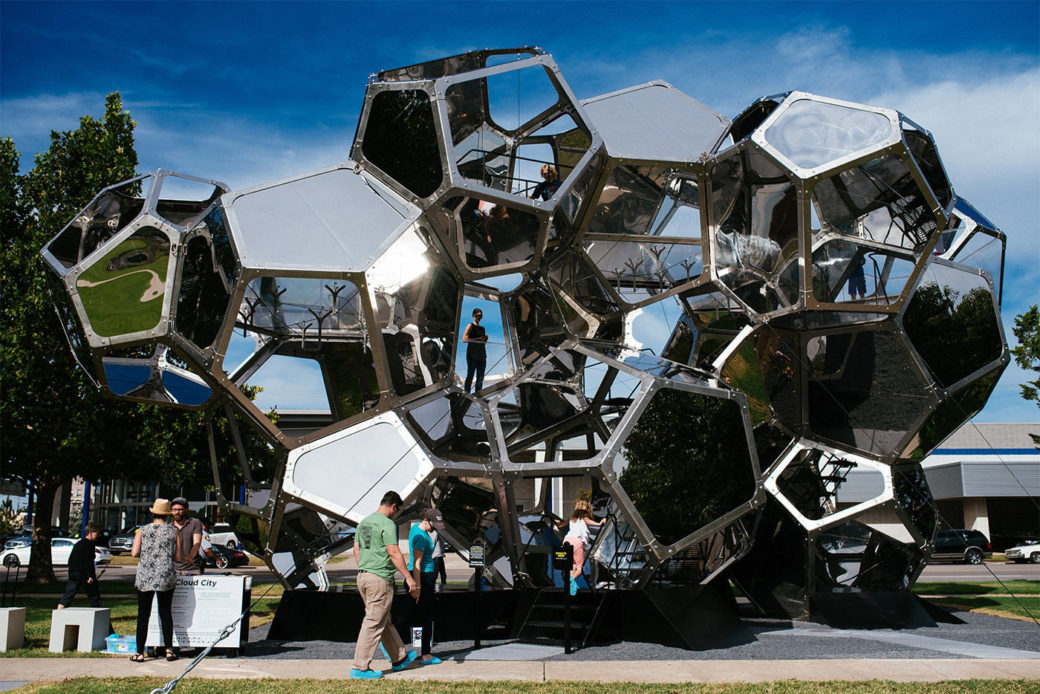 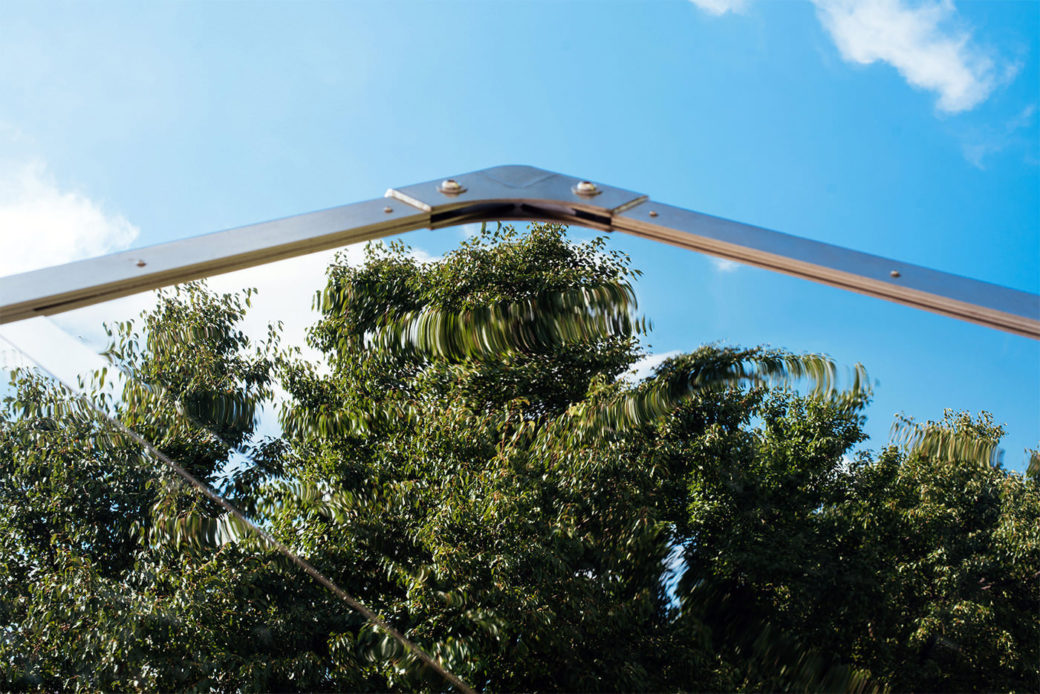 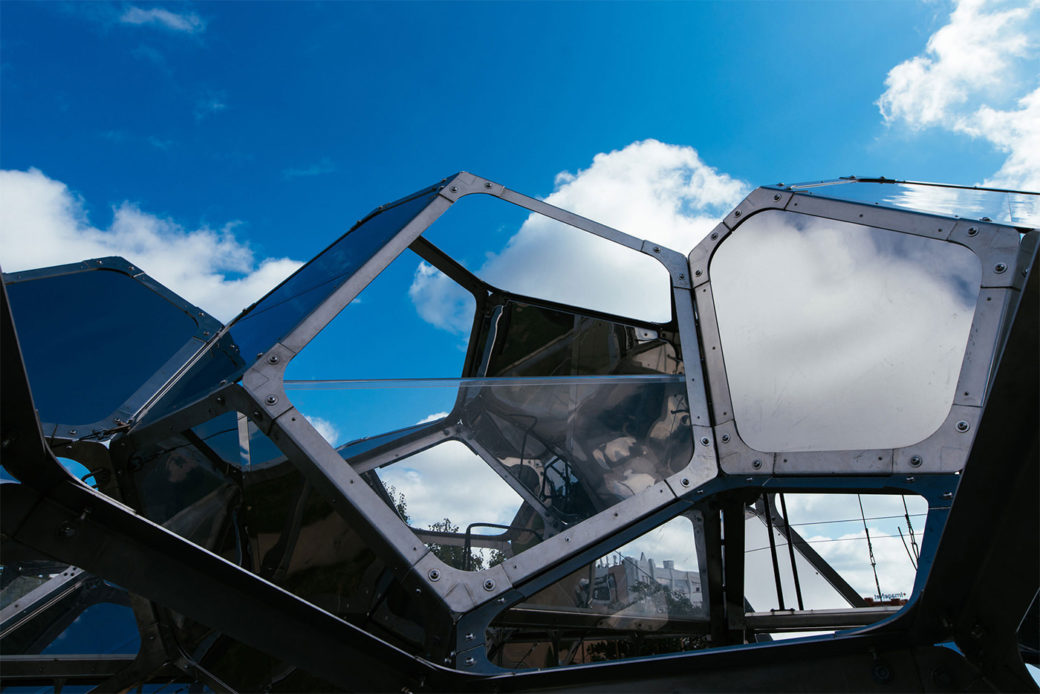 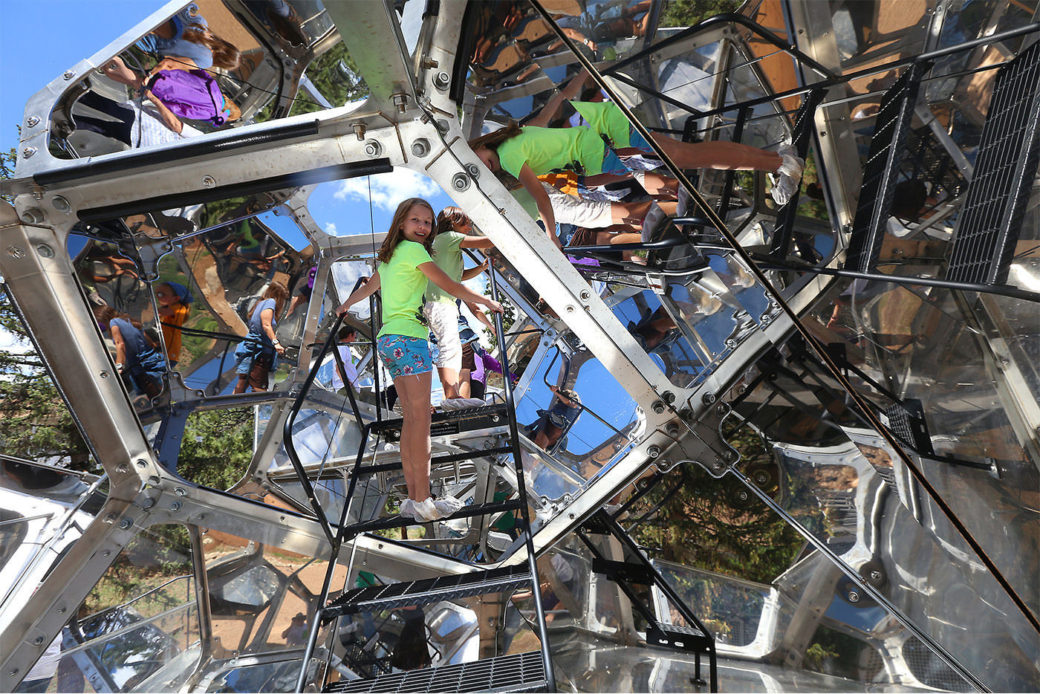 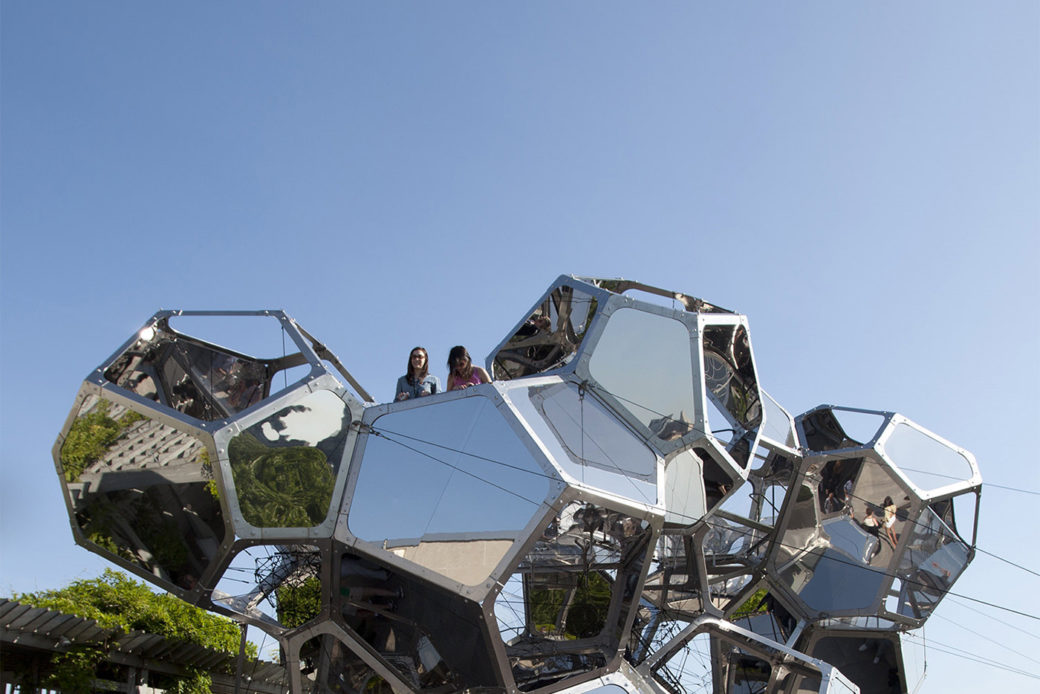 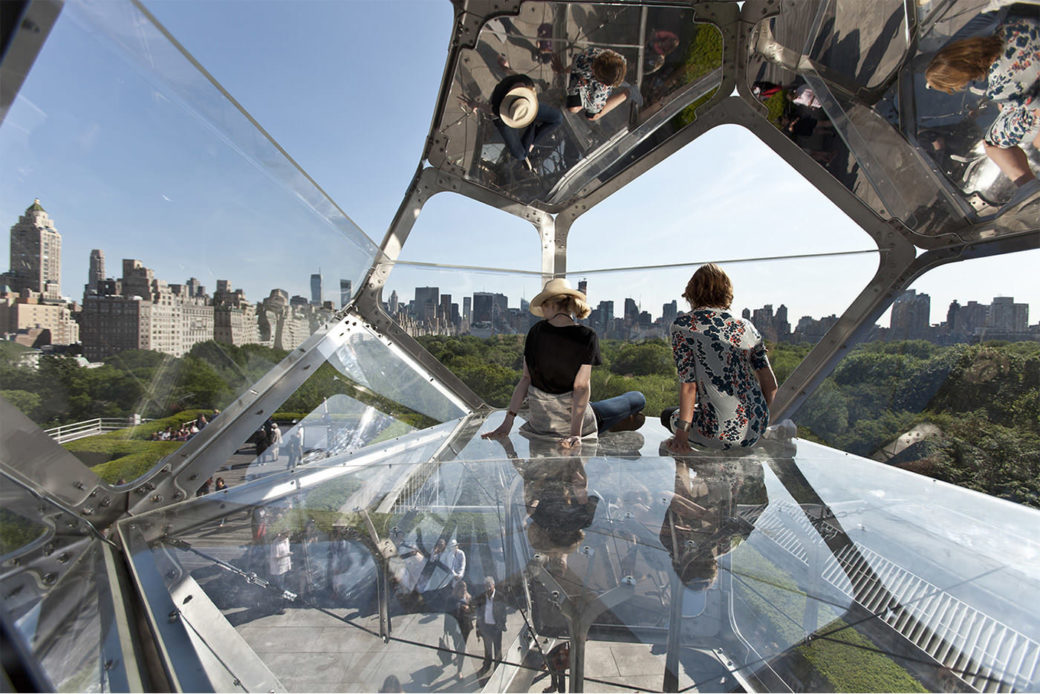 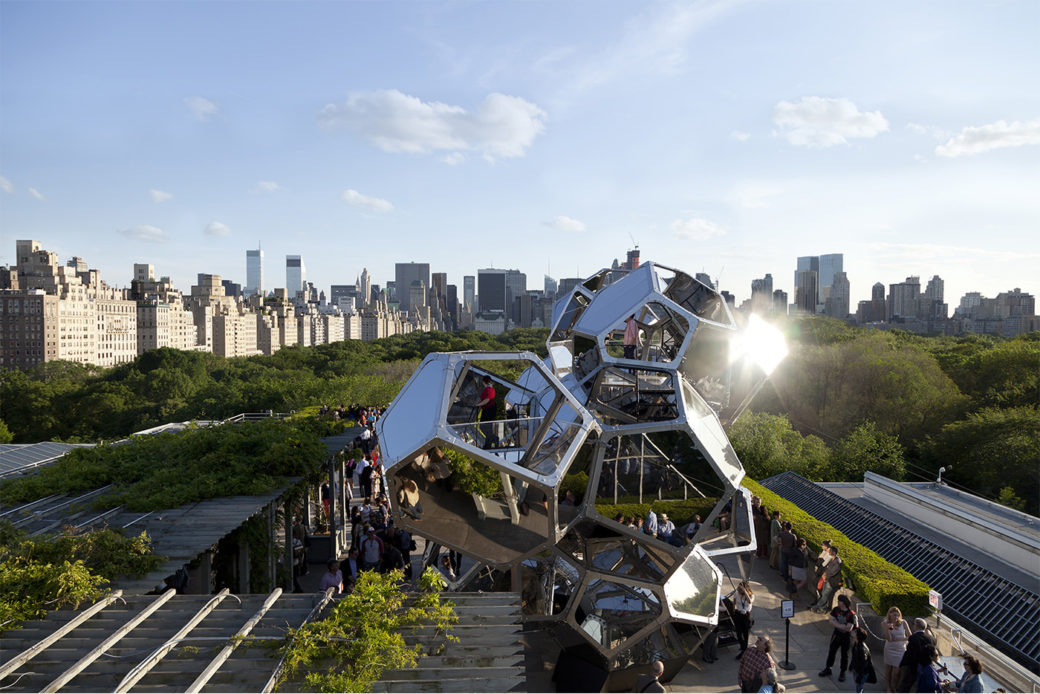 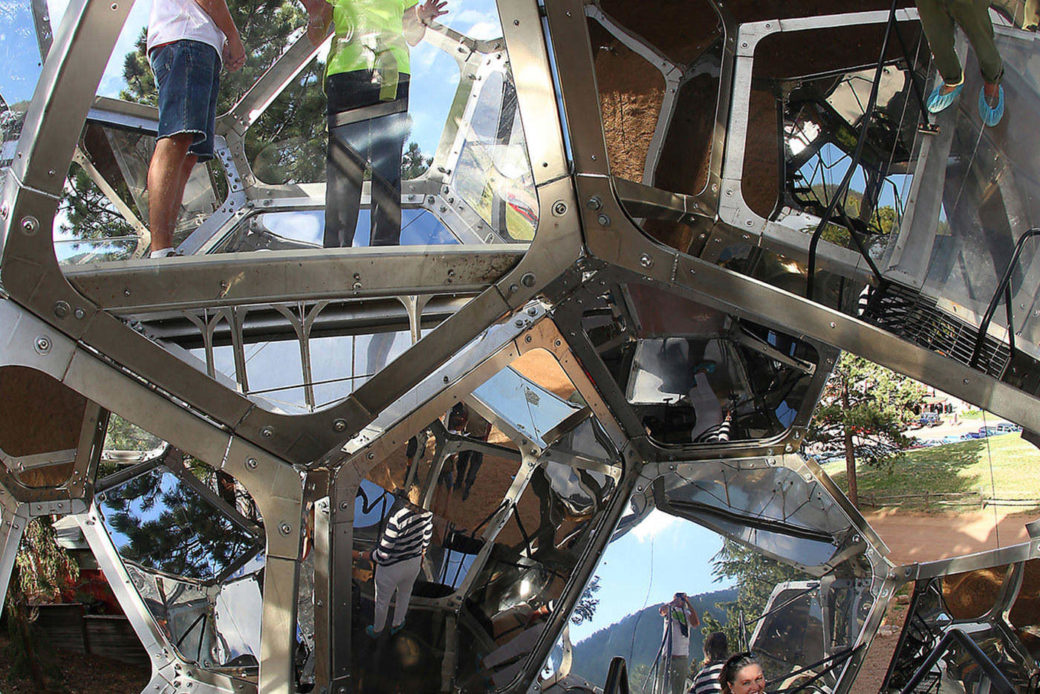