Sculptor and Pioneer Melvin Edwards to Exhibit This Fall

Oklahoma Contemporary is thrilled to welcome Melvin Edwards, a pioneer in the history of contemporary African-American art and sculpture, back to Oklahoma with his first solo exhibition in the state in the last 25 years. His exhibition will be held Oct. 27–Dec. 27, 2016.

Originally from Houston, Edwards emerged onto the art scene in Los Angeles in the early 1960s. He became well-known for his Lynch Fragments series, begun in 1963 and continuing evocative forms. In 1970, he became the first African American sculptor to have a solo exhibition at the Whitney Museum of American Art. That exhibition showed, like Lynch Fragments, his interest in working within and against the boundaries of abstraction and minimalism, using materials with immense cultural and personal resonance, particularly in the context of the African American experience.

Over the past 50 years, his work has been complex and multilayered. His welded sculptures are abstract, though his materials and the titles move the works into the realm of the narrative. He was recently the subject of a 50-year retrospective at the Nasher Sculpture Center in Dallas, which toured nationally. His work is in the permanent collection of major institutions, including the Metropolitan Museum of Art, New York; the Smithsonian American Art Museum, Washington, D.C.; the Museum of Modern Art, New York; The Whitney Museum of American Art, New York; the Los Angeles County Museum of Art; the Chicago Art Institute; and the Dallas Museum of Art. Recent shows include the Venice Biennale (2015), Art Basel Miami Beach (2011-2015), Frieze New York (2014) and Art Dubai (2012). 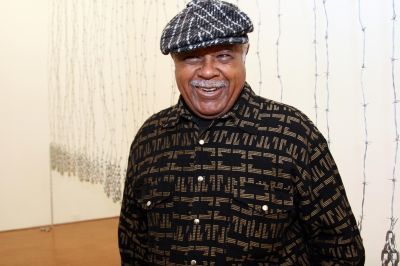