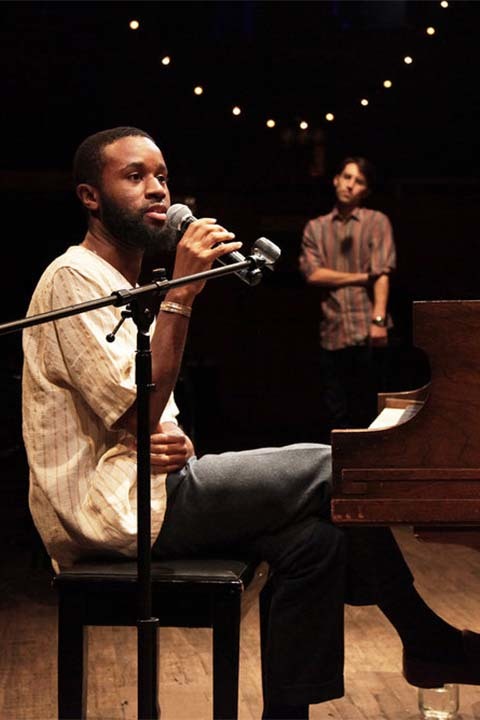 Piano Tales is James & Jerome's ongoing celebration of storytelling, music and the freedom that comes from not having a plan.

An old woman on her death bed asks two musician-storytellers to tell her a few tales in her final hour. The audience chooses which three tales will be told that performance and in what order, by selecting items from a trunk.

James & Jerome tell those tales differently for each performance, discovering a totally new show right along with the audience.

James & Jerome (James Harrison Monaco and JJJJJerome Ellis) are a duo of musician-storytellers based in New York. They make hyper-literary, live-music story performances for theaters and other spaces. Their work has been presented by The Metropolitan Museum of Art, Lincoln Center Education, La MaMa, the Under The Radar Festival, Joe's Pub at The Public Theater, Ars Nova and The Kimmel Center for the Performing Arts, among others. They often collaborate with directors Rachel Chavkin, Andrew Scoville and Annie Tippe.

Recent James & Jerome projects include: The Conversationalists (The Bushwick Starr), Piano Tales (La MaMa, Joe’s Pub at The Public Theater, Lincoln Center Education, etc.), Ink (Metropolitan Museum of Art, The Brick, BRIC Arts Media), Aaron/Marie (Under The Radar Festival, Ars Nova) and They Ran and Ran and Ran (HERE Arts). They have developed their work at residences with the Kimmel Center for the Performing Arts, the Public Theater, Berkeley Repertory Theatre and BRIC Arts Media, and they were members of the Public Theater's inaugural Devised Theater Working Group.