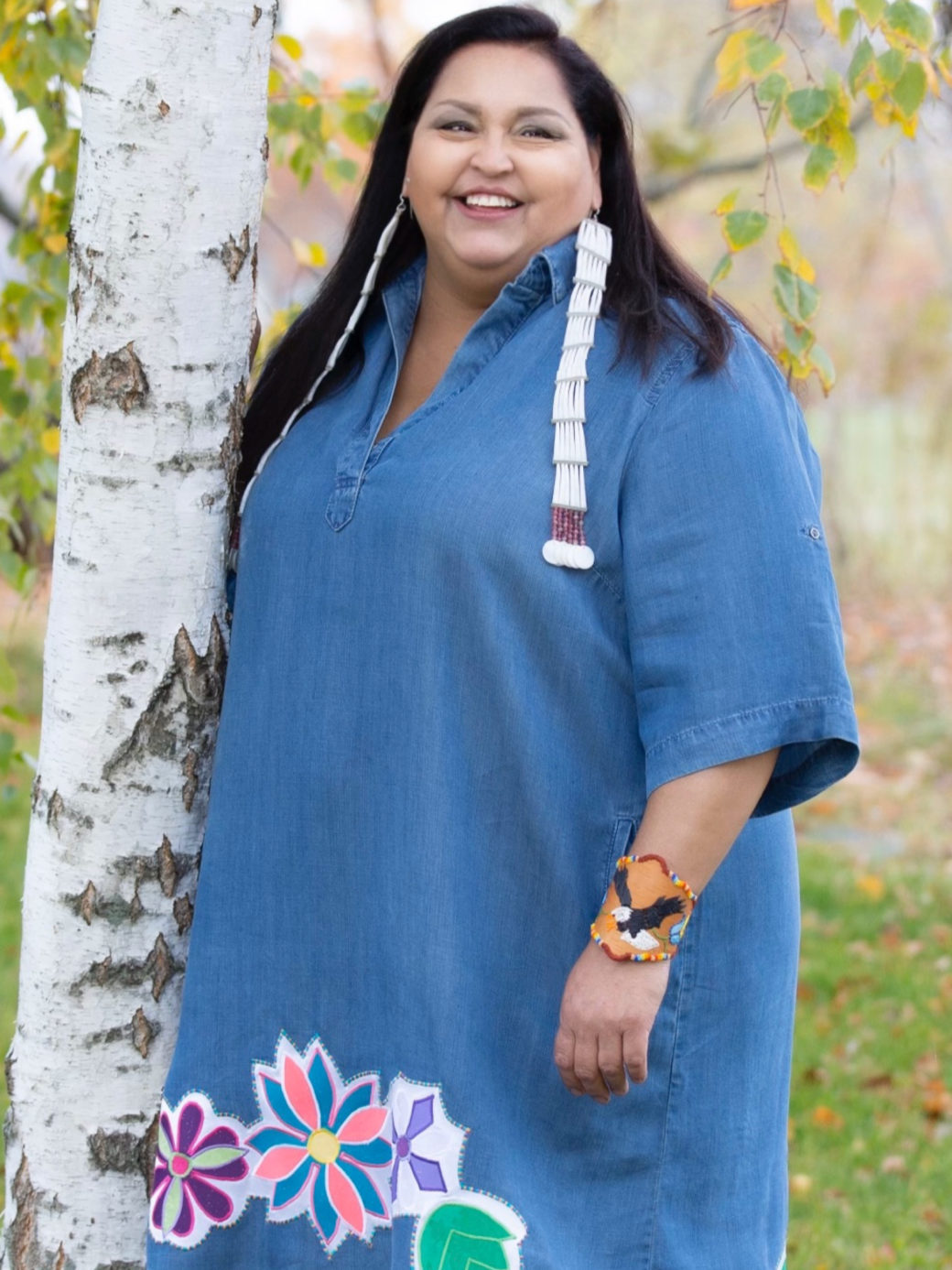 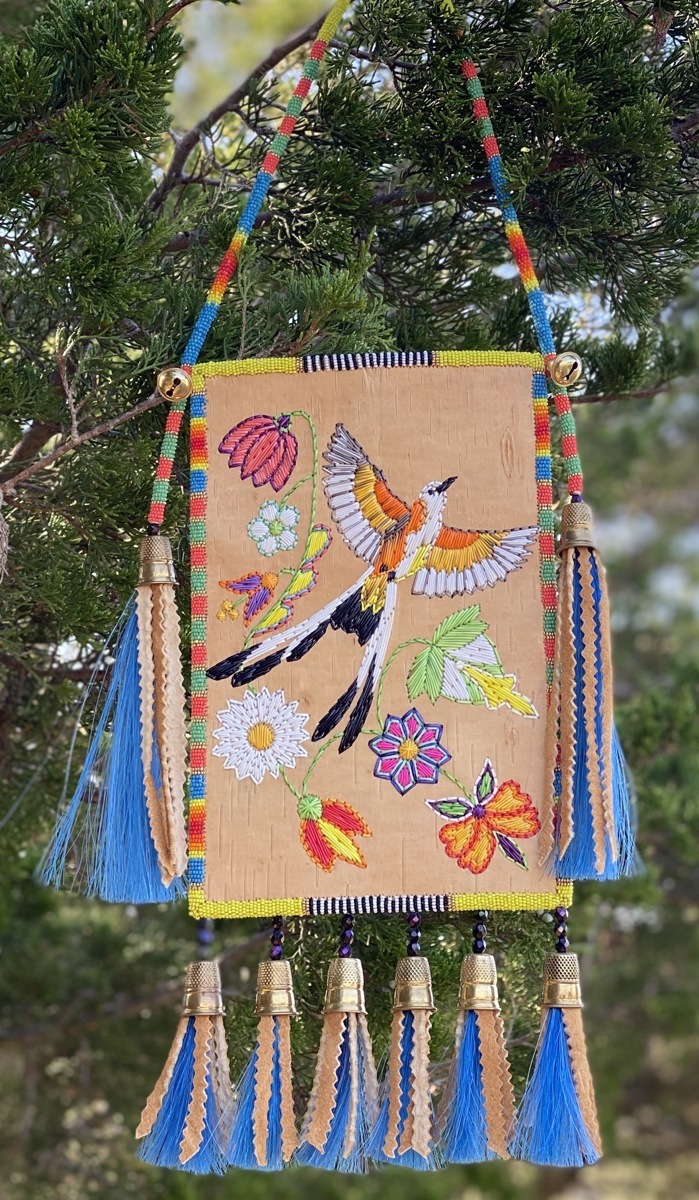 The art of Monica Jo Raphael is five generations in the making. Growing up on the Grand Traverse Band of Ottawa and Chippewa Indians Reservation in Michigan, Raphael was steeped in the tradition of her ancestors from an early age. Today, she carries on the legacy of her great-grandmothers who were prominent early 20th century quillworkers, masters of a traditional woodland art using porcupine quills and birch bark to embellish textiles.

"For many Native artists, that's how they do a traditional art," Raphael said. "It's been passed down, from generation to generation."

Combining these family-honored traditional techniques with vivid contemporary colors and complex designs, Raphael's quillwork gestures simultaneously to the past and the future. But it wasn't until 2018 that the artist left her career as a tribal community advocate to dedicate herself to the craft full time.

"Life expectancy for a Native woman is only about 75 years," she said. "Of course that's just basic data, but I decided I wanted to spend the next 20 years of my life doing something I really love. So I went full blown, headfirst into the art market world."

In the years since, Raphael has taken her work to new levels, earning accolades for her dazzling designs in places like the Woodland Indian Art Market, the Eiteljorg Indian Museum Festival and elsewhere. Her most recent piece — Debwaywin “Her Berry Fast,” quillwork celebrating a young woman's coming of age — was acquired for permanent collection by the Smithsonian's National Museum of American Indian.

Porcupine quillwork is the art of how you see your materials.

Studio School Online students will have the opportunity to discover the art and history of woodland quillwork alongside Raphael on Oct. 24. Her workshop will teach participants how to harvest porcupine quills, sweetgrass and birch bark, along with how these natural elements are prepared for use in woodland quillwork as it relates to the Anishinaabek.

In the meantime, we caught up with the fifth-generation quillworker to talk about her practice, workshop and relationship to the art form handed down from her ancestors. 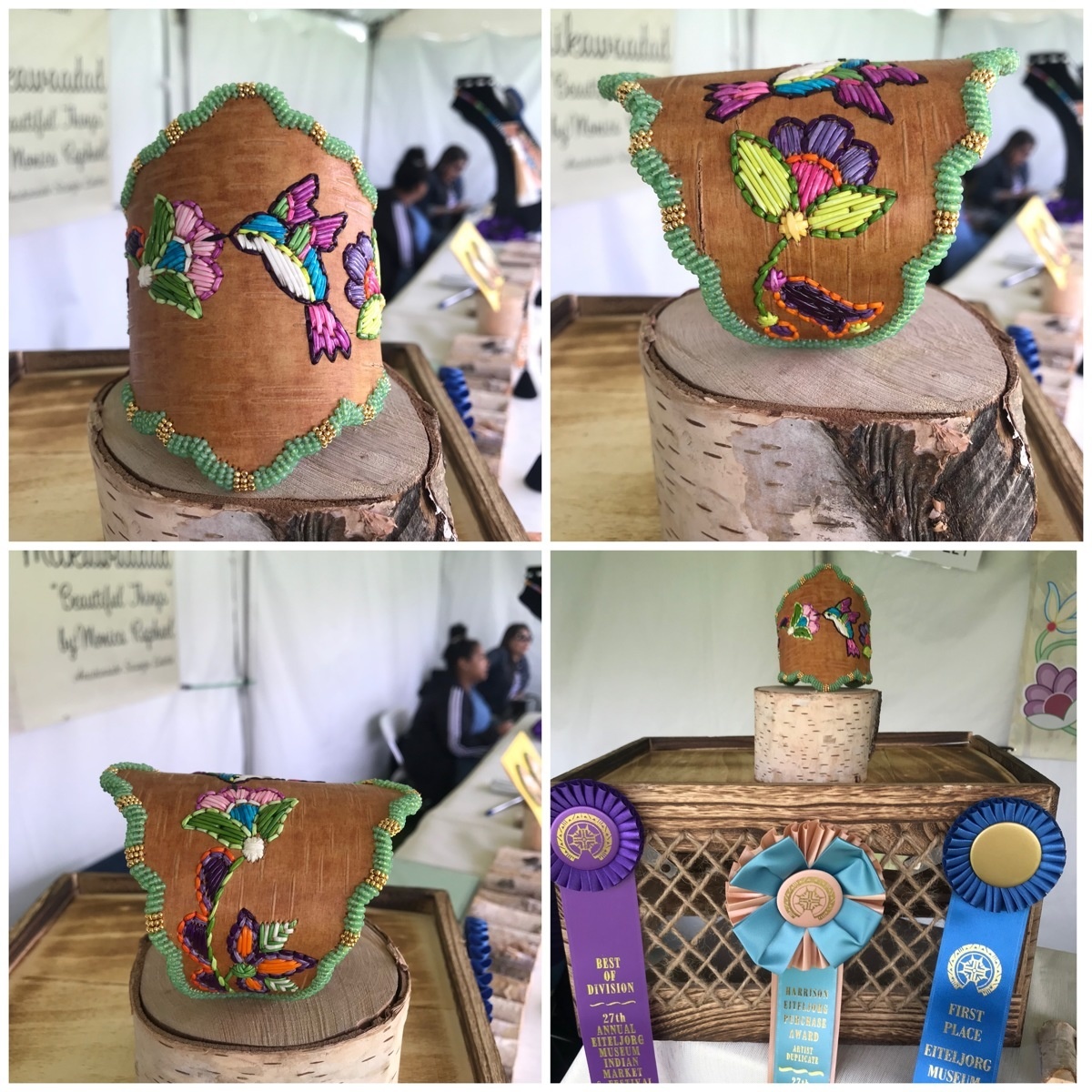 For readers who might not be familiar with quillwork, how is it different from other art forms?

It's the art of how you see your materials. Unlike maybe a painter or ledger artist, who can go and purchase their materials, everything we use for quillwork has to be harvested. And they're harvested at separate times of the year. You can buy porcupine quills or a piece of birch bark, but if the birch bark isn't harvested during a 10-day time frame in June, the bark is going to be really hard and not pliable enough for porcupine quillwork.

You have to check the trees every day. There's a certain side of the tree that will tell you if it's ready, and then you harvest the bark of the tree. So I guess the bark is what you would call your medium. And then you gather your porcupine quills in the very early spring after the snow melts, or in the fall after the first frost. If you gather your quills in the summertime, they're going to be oily. Unless somebody has taught them, people aren't going to know that. 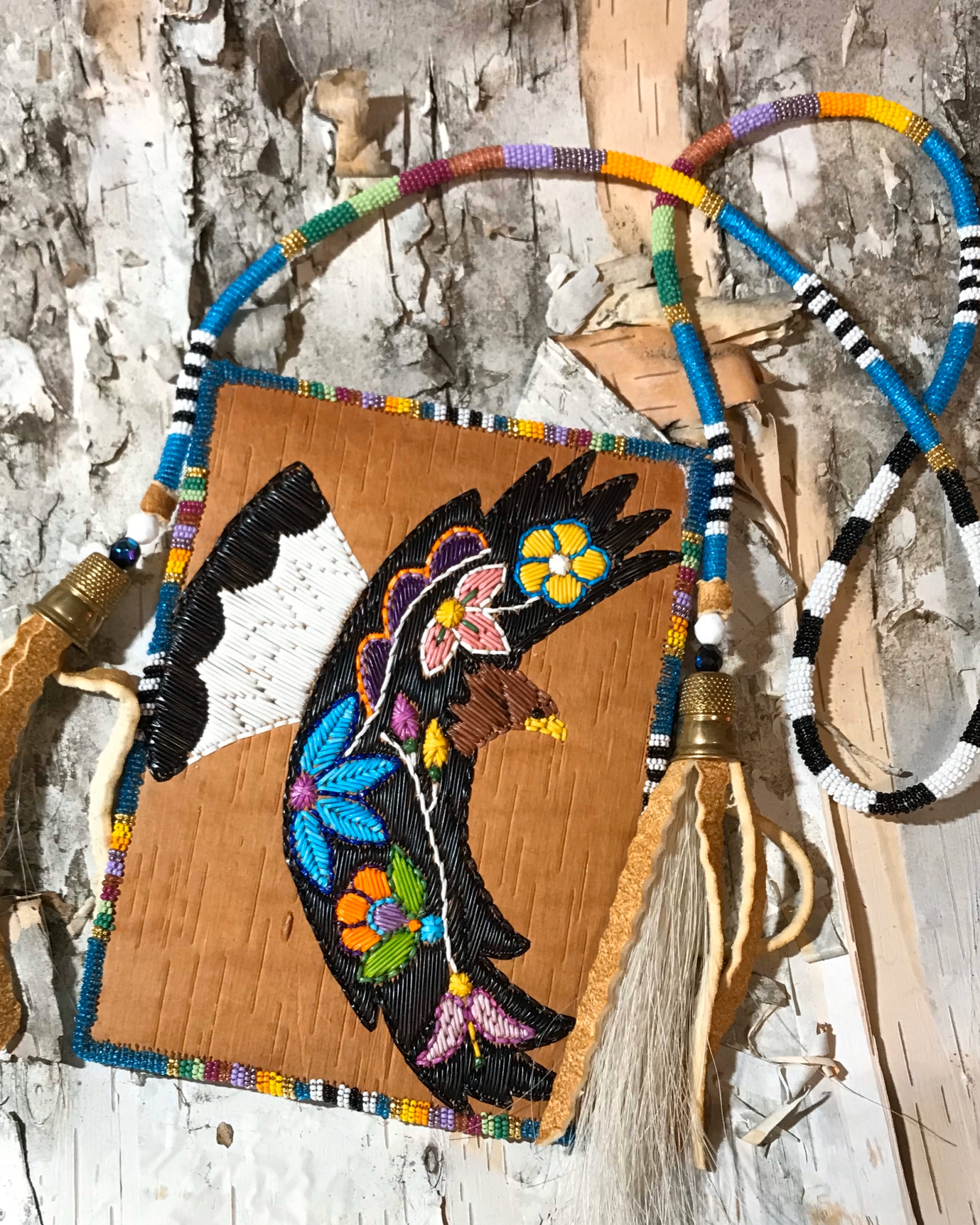 Studio School Online students will have the opportunity to discover the art and history of woodland quillwork alongside Raphael on Oct. 24.

How do you harvest porcupine quills?

I get roadkill. Porcupines tend to get hit on the roads right after the snow melts in early spring, or in late fall after it rains a lot. We would always make a joke and say "Let's go hunting after it rains!" We would just drive the back roads in northern Michigan, where I'm from. I live in Oklahoma now, so I'm not able to do that. Last year, I was able to go up north during the fall and spring to gather my materials, but with the pandemic I doubt I'll be able to go this year. So I'll have to rely on my family up there to go out and harvest some porcupines.

Once you get a porcupine, you have to clean it. You have to pull its quills out, which is really easy. You just pull them out. You don't need pliers or anything. (People talk about using tools like that, but you'll damage the quills.) Anyway, you pull them out of the porcupine and sort them by size. Then you take all the hair out, wash them and let them dry. You'll dye them in various dyes. I've done pieces with natural dyes — berries, roots, insects — but I've also done pieces with commercial dyes, like food coloring. You have to prepare your medium before you can quill. 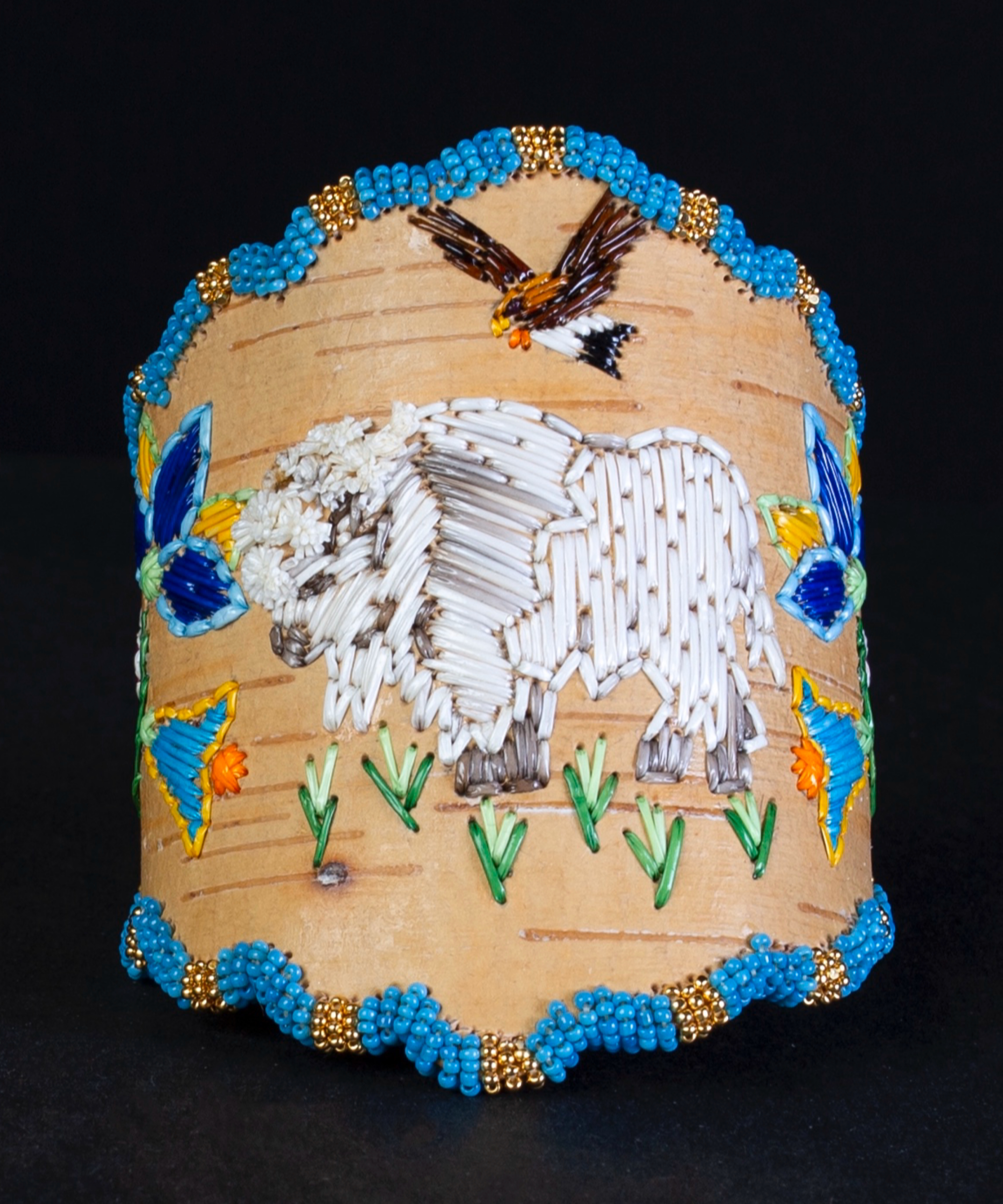 What can Studio School Online participants expect to come away with from your workshop?

They are going to learn the different steps — as much as you can teach in a setting. They'll learn how you would pull the quills out; how you would take the bark off the tree; how you gather sweetgrass. We won't really go into dying too much. That's a longer workshop.

Participants will make an ornament. It can really hang anywhere — it doesn't have to be a Christmas tree. They'll also make a sampler, a rectangular piece of bark where they're taught several different stitches. So in the morning part of the class, students will make the sampler to look back on how to make those different stitches. That's how, in quillwork, you might teach somebody else. Then you have that sampler forever, so you can look back and say "Oh, this how I did that stitch!" You might not use that stitch in the actual ornament, but you might want to use it if you continue on.

They're also going to learn the Anishinaabemowin words. All of the tools are labeled in Anishinaabemowin, which is our native language. Most Algonquin-speaking tribes have a very similar language. For example, the Cheyenne or Shawnee or Pottawatomie — any of those tribes local to Oklahoma. If any participants are part of those tribes, because our languages are so similar, if they're not a language speaker they could take the words to all of these tools to a language speaker, and they would be easily translated into their specific language. If we lose our language as Native people, then we really lose the heart of the culture. So I really try to promote the language within the art itself.