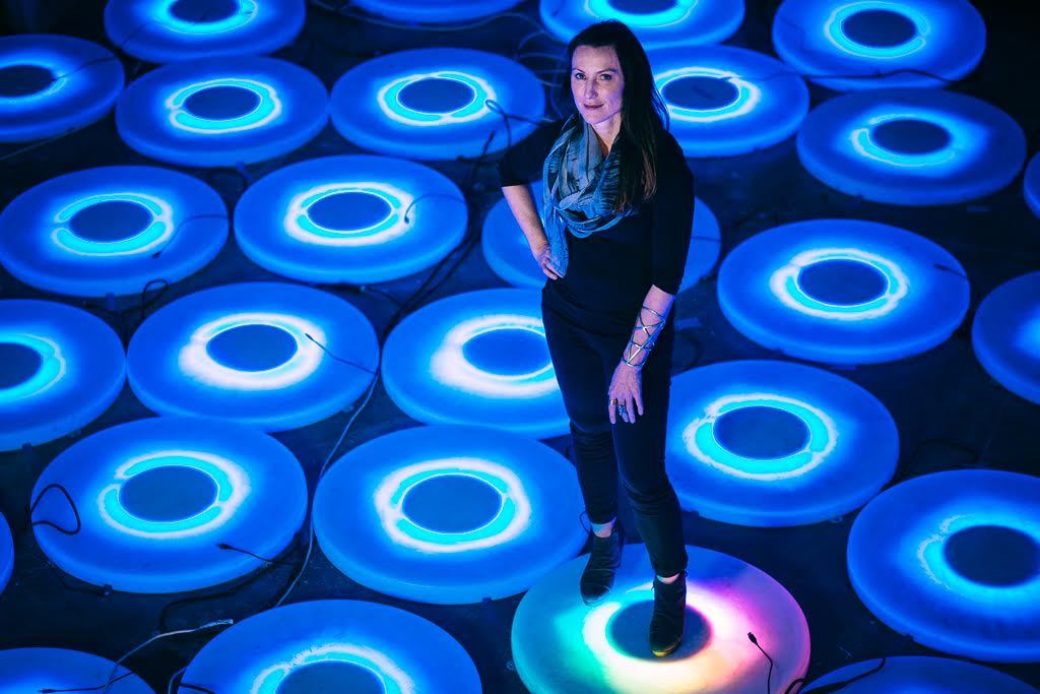 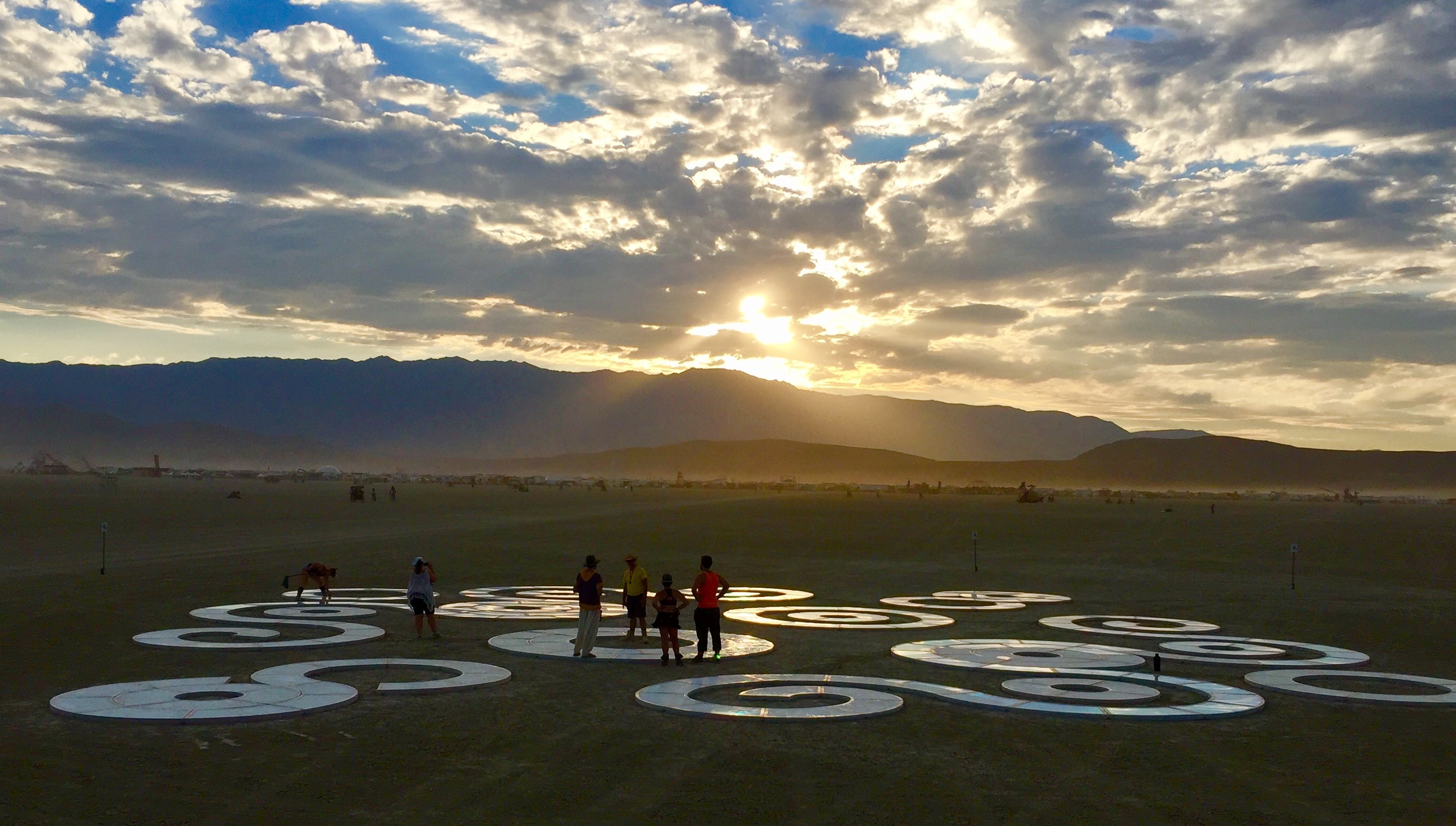 Bringing people together in these days of distance is a heavy lift, but Jen Lewin is up for the challenge. She and her studio team have installed the artist's interactive light landscapes across the globe, including a recent work in Toyko — her largest, at 15,000 square feet — which, like so many of the world's plans, was derailed by the outbreak of COVID-19.

"It was kind of devastating, to be honest," Lewin said. The spiraling LED pathways of her Cosmos installation, meant to forge connection between visitors to the city's Takanawa Gateway Fest, sat unused and unblinking while the artist quarantined at home in New York City. "Interestingly enough, it opened last week. Now the feeling there is happiness, but it's complicated by the fact that I'm not there." 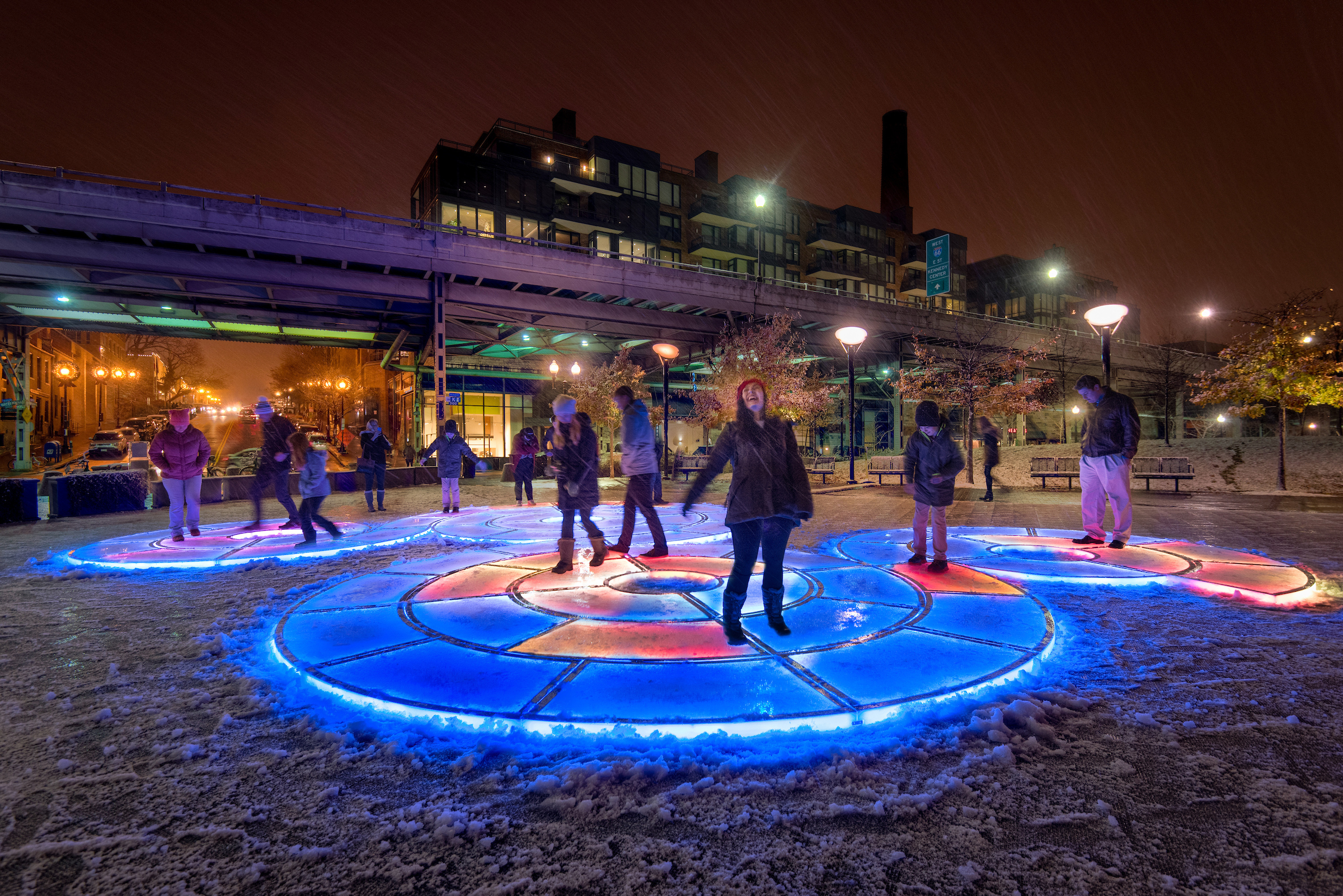 The first installation of Aqueous at Georgetown GLOW in Washington, D.C., 2017. (Photo by Sam Kittner)

Lewin is breathing a little easier when it comes to her Aqueous light sculpture, opening Aug. 6 at Oklahoma Contemporary's Campbell Art Park. The onsite installation is being overseen by her studio's head of operations, Charles Lindgren, who has been working with the arts center's exhibitions team to bring the mesmerizing experience to life in the green space outside our new home at NW 11th and Broadway.

"I'm not an artist that might sketch something out on a napkin and then go and hire a software team an engineering team. It's all actually built in the studio," Lewin said. "I love making things. That's why I became an artist. I want my hands on every aspect of making the work."

There's blood, sweat and tears in every line of code.

The process for getting Aqueous from the artist's Brooklyn studio to downtown Oklahoma City began in earnest about six months ago. Leading her team, Lewin tackled logistics, re-built surfaces from past sculptures and engineered a version of the touring installation made to the specifications of its new temporary home. 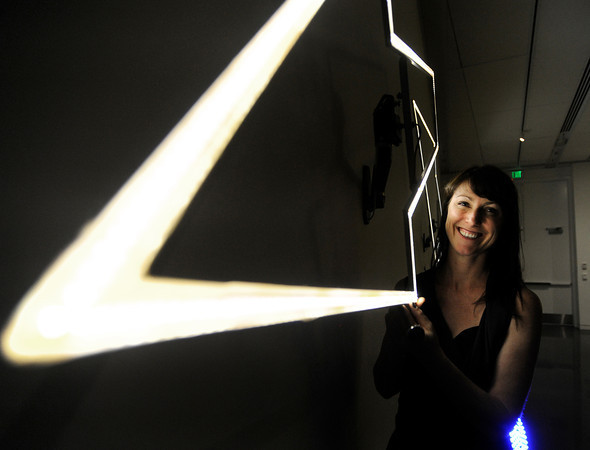 "I'm not an artist that might sketch something out on a napkin and then go and hire a software team an engineering team. ﻿It's all actually built in the studio." - Jen Lewin, Bright Golden Haze artist (Photo courtesy Jen Lewin Studio)

"There's blood, sweat and tears in every line of code," Lewin said. "There isn't an outside software developer. It's integrated and hands-on. That has imperfections to it, of course, but that's what makes it human."

The result of all that invisible labor is a dazzling light landscape, bringing the themes of Oklahoma Contemporary's inaugural Bright Golden Haze exhibition out into the open air. Beginning Thursday, the sculpture will be open to the public daily until 11 p.m., inviting curious passersby to walk, dance or play along its LED surface and see what materializes.

During the day, Aqueous will reflect the sky, audience and surrounding environment. At night, the sculpture's lighting system will respond to the human movement on its surface — lighting up as people maneuver the pathway. Visitors will be asked to keep their distance as they explore the space, while contemplating our connections to each other.

"The heart and soul of all this work is really about bringing people together," Lewin said. "It's about creating this connected experience. It's about sort of this joyful way that you can come into your community to interact with a piece of art, and then not only notice the work but also the people around you. That's the art."